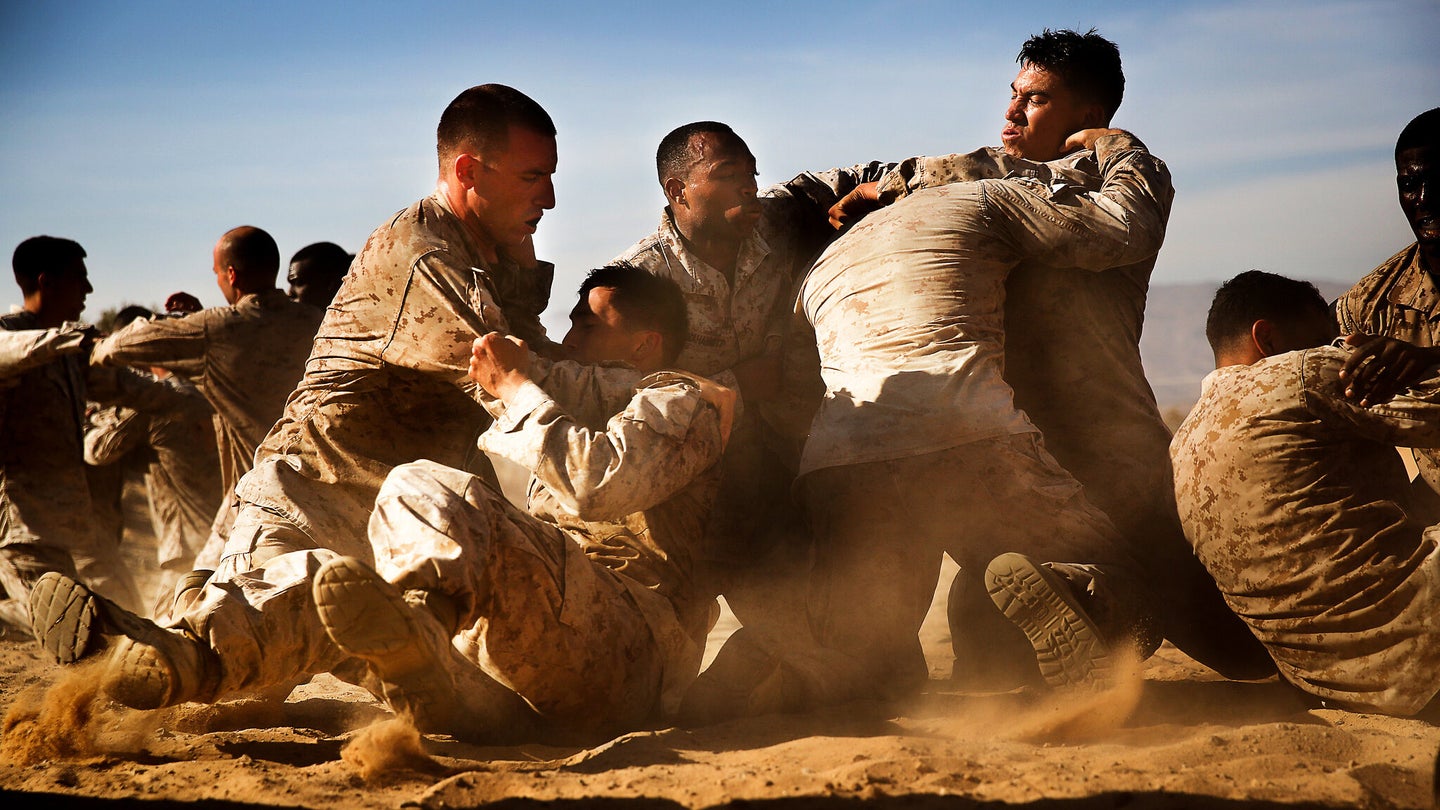 Here’s a joke about the U.S. military services that you may have heard: The Army and Navy are branches, the Air Force is a corporation, and the Marine Corps is a cult. Like so much military humor, it’s a bit of tongue-in-cheek ribbing, like playful trash talk between siblings or close friends. It also contains a kernel of truth, particularly as it pertains to the Marine Corps. (I should know.)

You will find no finer example of the Corps’ stranglehold over its current and former members than on Nov. 10, which celebrates the tale of a bunch of ragtag brawlers who gathered at a bar, got (presumably) hammered drunk, said ‘fuck it!’ and created a martial organization that’s been kicking ass across the globe for the last 247 years.

For Marines still serving, the Marine Corps birthday and ensuing Birthday Ball are annual affairs, a chance to toss on their Dress Blues or Service Alphas and pay homage to the Corps’ founding by — you guessed it — getting hammered drunk together and saying ‘fuck it!’ at least once that evening.

But even for those of us who have long since gotten out and left the regulation haircuts, jargon, and daily PT behind, Nov. 10 remains embedded in our internal calendar. And as it rolls around each year, more than one of us will find an excuse to let everyone within earshot know that it’s the Marine Corps’ birthday.

So, we here at Task & Purpose decided to lay out all the ways that Marines will subtly (and not so subtly) let you know that they were in the Corps, starting with the obvious:

If you want proof of this, please return to the first paragraph of this story and re-read the very last line. It took me all of three sentences to steer this piece toward an opportunity to name-drop that I was in the Marines. And I just did it again. Every single Marine will do this at least once on the Marine Corps’ birthday. That’s not hyperbole, that’s a fact.

Exactly how Marines will tell you, however, will vary.

Announcing one’s service in the Marine Corps can, at times, be overt, like a red star cluster streaking into the sky for all to see. This might take the form of a full-throated “OORAH” or “YUT!” bellowed abruptly from across the parking lot as one reformed devil dog catches a glimpse of another through one of the many tell-tale signs that are used to telegraph that shared service, whether a Marine Corps bumper sticker, hat, or tattoo that’s made deliberately visible by wearing a t-shirt on a chilly November day.

However, some of these “I was in the Marines” name-drops are more subtle, closer to a wink and a nudge than a verbal slap across the face. They rely on a bit of insider knowledge, like a breadcrumb trail of stale motivation littered throughout the conversation for other recovering or incognito jarheads to pick up on.

‘So, back in the Marine Corps…’

One example of this more subtle approach — take “subtle” with a grain of salt here, as this is not a group known for tip-toeing — might include nonchalantly working “sand fleas” into a conversation about pests, which is a surefire way to let others know that not only was the speaker in the Corps, but they either went to boot camp at Parris Island or were stationed in North Carolina or South Carolina.

The flip side of this involves tossing out “The Reaper,” which is a big hill that recruits at Marine Corps Recruit Depot San Diego in California had to walk up one time during The Crucible and will never ever stop talking about. The officer equivalent is to make an overt connection between some skill you have — like how to use (or not use) a compass — to your time at Officer Candidate School or The Basic School.

Then there’s the more general approach which involves tying oneself into a pretzel in an attempt to make some Marine Corps experience related to whatever is happening at the moment: Someone’s late to a meeting? Good time to remind everyone that “back in the Marine Corps, if you weren’t 15 minutes early, you were late.”

Last, but surely not least, there’s the profile pic. Without fail, come Nov. 10, there will be a marked uptick in the number of profile photos featuring Marines in uniform, either deployed or at home — it doesn’t matter, so long as the photo looks cool. That’s the standard.

There’s no real rhyme or reason to this, beyond pride in one’s service and, perhaps, a desire to rub it in everyone else’s face. It’s not like the commandant is emailing Marines and telling them to make sure they grab the yut-yut’iest photo they have and toss that shit up on social media. It just happens.

The good news for everyone else is this: they now know which of their online friends and acquaintances served in the Corps, which means they know who to wish happy birthday to.

However a Marine goes about telling everyone they were in the Marines, one thing is sure: If you’re standing near one this Nov. 10, you’ll know it.