The Navy’s Uniform Changes Are Anything But Gender Neutral

There is one glaring issue with the Navy’s significant shift toward gender-neutral uniforms: they aren’t particularly gender neutral. The uniforms... 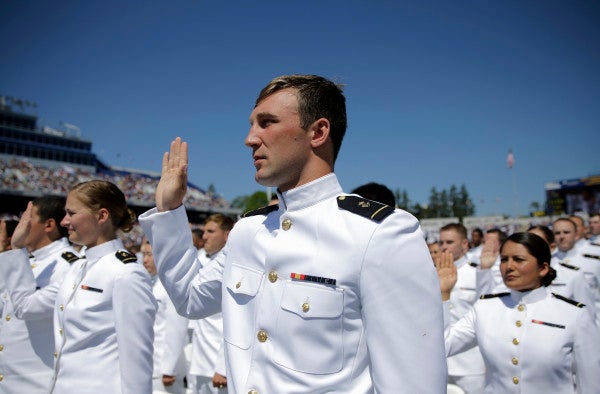 There is one glaring issue with the Navy’s significant shift toward gender-neutral uniforms: they aren’t particularly gender neutral.

The uniforms are men’s uniforms slightly redesigned for women. And female officers will be forced to pay out of pocket for them.

Secretary of the Navy Ray Mabus stated that the changes were driven by a priority to unify sailors and not divide them by gender. The Marine Corps has implemented similar uniform changes. “Uniformity is about ending the way we segregate women by requiring them to wear different clothes,” Mabus said back in May. “In the Navy and in the Marine Corps, we are trending towards uniforms that don’t divide us as male or female, but rather unite us as sailors or Marines.”

It may come as a surprise to many servicewomen that wearing a tailored, professional, feminine, dress uniform made them less of a participant in the naval service compared to the men to their left and right. However, forcing female officers to be the only service members who will pay out of pocket for the changes immediately creates a division: only one group is significantly impacted. Male officers and chiefs are completely unaffected, and all enlisted personnel will receive a monetary allowance to cover the costs of new uniforms, leaving female officers paying for a uniform change few wanted in the first place.

The changes, which will kick in October 2016, include a new unisex service dress blue for all enlisted sailors. All who wear this uniform will be required to wear the men’s “dixie cup” cover, effectively doing away with the female “bucket” cover and dress blue jacket by 2020. A new enlisted service dress white uniform will be phased in for wear by 2020. A new service dress white “choker” uniform with Mandarin collar will be available for female chief petty officers and officer in 2017 for required wear by 2020. All female chiefs and officers will be required to wear the “Alternate Combination Cover” — the male cover redesigned to better fit a head wearing a bun — by October 2016.

Enlisted sailors and chief petty officers will receive a clothing allowance to pay for the new uniforms. New accessions, including enlisted sailors graduating from boot camp and newly commissioned officers, will be largely unaffected financially by the changes. Both receive a one-time clothing allowance that covers the cost of buying thousands of dollars’ worth of new uniforms.

The issue of expense for female chiefs has specifically been addressed in the new guidance, stating “Uniform allowances for female CPOs [Chief Petty Officers] will be adjusted to facilitate procurement of the new SDW [Service Dress White] coat prior to the mandatory wear date.” None has been issued for female officers, which leads me to the assumption that female officers will be expected to pay out of pocket.

The cost of all the new uniform items has not yet been released. Only the alternate combination cover is available on the Navy Exchange website for $71.99. It’s certain that female officers will be expected to pay a minimum of $200 to replace over $300 worth in perfectly serviceable uniform items. That number is based on the cost of male uniforms, including the mandatory cost tailoring.

The new uniform items that female officers will be required to buy will likely cost the same as the current women’s uniform items. After the cost of tailoring, the uniform changes will run female officers nearly $700 out of pocket without compensation, all for a uniform that is worn less than once a year. That was a month’s rent when I lived in Virginia Beach as an ensign.

It’s a known fact that the military changes its uniforms all the time. The Navy’s last major overhaul was during the rollout of the Navy working uniform type I and Navy service uniform in 2010, but smaller, incremental changes have occurred annually. These changes have come with the expectation that service members will then have to buy them. This wastes taxpayer money, enriches the manufacturers, and forces service members to spend their salaries on something that does nothing for national security. That said, it’s a largely accepted frustration, and like many other changes that service members don’t initially like, we get over it, used to it, and move on.

The Navy has been especially notorious for this in recent years, with the issuance of the working uniform type I and service uniform, now-defunct development of service dress khakis, working uniform type II and III to Navy ground forces, and flame-resistant coveralls. While frustrating, the changes either affected all sailors or were an optional expense. The Navy fitness suit, which will be required by 2020, is an example of the former, while a female khaki overblouse remains optional for female chiefs and officers.

An additional subject of frustration is that the changes were not something that had been particularly asked for, and there are mixed emotions about them. If you were to ask most female naval officers if there’s anything about their uniforms they’d like to change, the answer is simple and nearly unanimous: pants that fit.

The khaki and summer white pants are notoriously ill-fitting and widely unpopular as they come all the way up to the natural waist. Otherwise, the female dress uniforms are sharp, professional, and distinctly feminine. One feels very confident when walking around in a uniform that has been largely unchanged in design since they were first issued to the Women Accepted for Volunteer Emergency Service in World War II.

Despite ambivalence about the style of the new uniforms, millions have been spent on their development, and their introduction is inevitable. However, a few measures can be taken to make the changes more palatable and equitable:

Provide a uniform allowance for the purchase and tailoring of the new uniforms.

Allow female officers who commission prior to 2016 to be “grandfathered” in, and make the new uniform items optional for them.

This means that anyone who joined the Navy before new uniform items became available will not be required to buy new ones. There is some precedent, as some obsolete uniform items, including the khaki “Ike” jacket, were authorized for wear well after they were no longer available for sale.

Incorporate more transparency and feedback into the uniform development process.

Millions are spent on uniforms that nobody wants or needs, but sailors have come to expect changes every few years. At the very least, changes could reflect significant feedback from the fleet. Currently the new uniforms are tested primarily on Naval Academy midshipmen, who have no basis for comparison, and a select few senior officers. If junior officers or mid-grade officers get to wear test the uniforms, it typically occurs in the Washington, D.C., area. The items are very rarely rare tested in other fleet concentration areas, and the feedback is not released to the wider Navy.

There’s precedent for feedback leading to a positive change, with a new lightweight Navy working uniform rolling out next year to humid, tropical locations such as Guam, Singapore, and Hawaii. Otherwise, recent changes have been executed with little transparency, without the results of wear tests being released. As far as we know, the changes could have occurred with complete disregard from the feedback of wear testers.

Maybe next time, we’ll get pants that fit.