The Historic And Evolving Role Of Women In The Military

The fourth film in a series of documentaries airing on PBS, “MAKERS: Women in War,” opens with a group of... 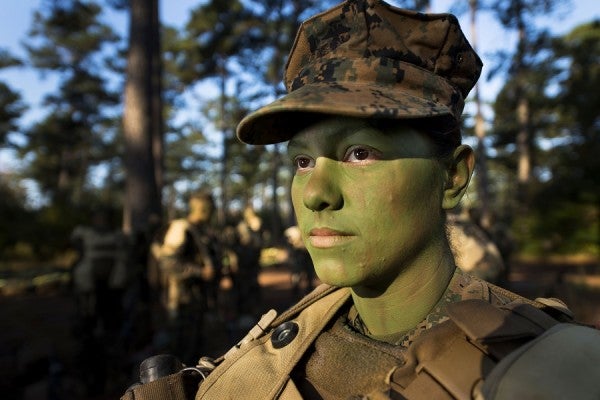 The fourth film in a series of documentaries airing on PBS, “MAKERS: Women in War,” opens with a group of Marines lining up to receive belts of ammunition prior to training on a live-fire range.

Dressed in full protective gear, the Marines are not immediately identifiable by gender, except for the female senior noncommissioned officer passing out the belts of ammunition to the two-person gunnery teams.

In contrast to the scenes of what is a relatively generic training event, a voiceover by author and activist Barbara Ehrenreich describes the historically male-centric vision of war as a rite of passage, dominated by warriors using bladed weapons and engaging in one-on-one combat. This version of warfare — and its intrinsic advantage to male warriors — she claims, was “…doomed when everybody started using guns.”

Here is the central thesis of the film, namely that the modern battlefield has opened an opportunity, and with the development of the all-volunteer military, created a need for women to enter the realm of war and warfare. The documentary charts this progress in a historical framework from the women who served in the service auxiliaries during World War II, through the expansion of women's roles and integration of women into the branches of service, up through the formal lifting of the ground combat exclusion policy in January 2013.

The documentary is clearly meant for a civilian eye, an impression confirmed by director Rachel Grady, whose production company, Loki Films, produced this segment as well as another called “Women in Comedy.”

“I'm coming from a civilian point of view —I'm a filmmaker,” explained Grady, who does not have a military background, but views the discussion contained in the film as extremely important. She later added, “This is for civilians who don't know anything.”

The documentary does not covertly argue for increased roles for women in combat, but rather demonstrates how servicewomen, in times of changing battlefields, have found themselves participating in greater degrees in those theaters of operation. Only after the fact have legislation and public opinion typically reacted to expand, or recognize, women's greater roles in modern combat.

“It's not of grave importance to most people ,” said Grady. “One thing we kept coming back to was women in combat. That was our thread.”

The scope of the film, addressing the issue of women in combat, is extremely ambitious, especially in light of the current conversation around women's increased roles, such as female Marines attending basic infantry training, and the Army’s recent decision to allow women to attend an iteration of Ranger school to assess their ability to attend and pass one of the Army's elite and highly physically and mentally demanding leadership schools.

The context the filmmakers chose presents both an historical foundation for this debate, as well as a touchpoint for the civilian audience who can relate to the history first, and through that, begin understand the development of women in the military during the course of conflicts from Vietnam to Panama to operations Iraqi and Enduring Freedom.

For a veteran audience, this film provides both familiar territory as well as different insights into the conversation about women in the military. For example, the film addresses the perspective of women who were drawn to the military looking for something that gave them opportunities outside the typical offerings of the civilian world.

Brig. Gen. Pat Foote recounts how she first joined the Women's Army Corps, looking for a job that wouldn't be that of a “secretary.” A bonus for Foote was that the pay scale for military men and women as exactly the same.

Diane Carlson Evans explains her enlistment in the U.S. Army Nurse Corps during Vietnam as stemming from both a sense of loss of friends who died overseas, as well as a sense of wanting to serve.

The documentary points out that these servicewomen were afforded greater opportunities than in prior conflicts, but still did not get combat training, or even issued a weapon when they entered the theater of combat.

Archival footage, gradually blooming from the black-and-white reels to the color footage of newsreels and television video, illustrates the story from the decisions women made to enlist, to some of the recruiting campaigns. Additionally, the filmmakers pulled from civilian newsreels to highlight the attention that women in uniform received in controversies, such as the military's Tailhook scandal, and Capt. Linda Bray, a military police officer who became the first women to lead troops in combat.

While the material contained in the film may seem familiar to veterans, especially female veterans, the documentary provides an important contribution to the conversation surrounding women in the military, drawing in an important voice — that of the civilian population that may need some education as to the historical context of women's participation in the service and the evolution of that service.

Although the film culminates in the lifting of the ground combat exclusion ban, the documentary provides a good basis for both military and civilian audiences to continue the conversation of women's roles in the future military.

“I'd love to know the direction of expanding roles for women when we're not in combat,” said Grady. With the new developments and opportunities women have achieved by both proving themselves on the battlefield as well as pushing for the chance to take on roles traditionally reserved for men in the military, what is going to happen next?