Nearly 1,500 Navy sailors, Marines, and Coast Guardsmen descended upon New York City from May 20 through 26, filling the... 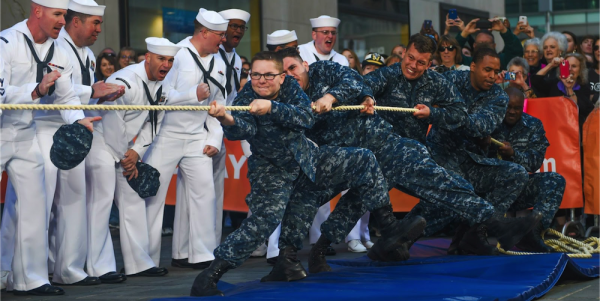 Nearly 1,500 Navy sailors, Marines, and Coast Guardsmen descended upon New York City from May 20 through 26, filling the city’s streets for the 27th annual Fleet Week. When civilians weren’t touring ships, watching aviation demonstrations, and enjoying military band performances, they could be seen all over the city mingling and snapping selfies with service members.

While Fleet Week is an opportunity for those in uniform to unwind at the city’s bars and restaurants, or embrace its culture at theaters and museums, it also provides them the rare chance to interact with all levels of the community. Whether rappelling into a park from a military helicopter or just sharing a laugh on a city street, here are some of the best photos of service members proudly representing their branches during this year’s Fleet Week throughout New York City and the surrounding area.

1. A sailor and Marines salute One World Trade Center during the Parade of Ships on the Hudson River at the start of Fleet Week.

3. At the NBC “Today Show,” Navy personnel give their all in a tug-of-war contest, on their way to victory against their Marine Corps opponents.

4. Marines from the 2nd Light Armored Reconnaissance Battalion mingle with civilians aboard a light armored vehicle in Times Square.

6. A crowd cheers sailors assigned to the USS San Antonio as they march in the Greenpoint Veterans Memorial Parade in Brooklyn.

10. A fireboat of the 343rd Fire Department of the New York Marine Division puts on a water display in front of the Statue of Liberty during the Parade of Ships in the Hudson River, officially beginning Fleet Week.