"There is no place for racial hatred or extremism in the Marine Corps. The Terminal Lance tweet featuring derogatory behavior by Marines is currently being investigated." 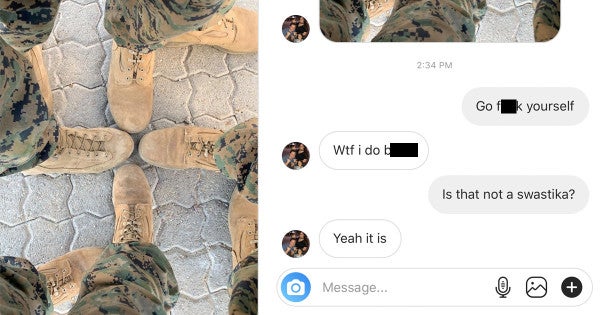 A Marine reservist is under investigation for posting a picture on Instagram that showed Marines positioning their boots in the shape of a swastika, a spokesman for Marine Forces Reserve confirmed on Monday.

Hollenbeck declined to say how many Marines in total are under investigation.

The picture came to light on April 26 when “Terminal Lance” creator and Marine veteran Maximilian Uriarte sent a tweet to the Marine Corps suggesting that Corps officials investigate. Uriarte, who is Jewish, told Task & Purpose he later deleted the tweet after he got confirmation the Corps would be looking into the matter.

“There is no place for racial hatred or extremism in the Marine Corps,” Hollenbeck said. “The Terminal Lance tweet featuring derogatory behavior by Marines is currently being investigated and any further comment would be premature.”

This is just the latest incident of a Marine being investigated for racist and pro-Nazi behavior. In February, Corps officials announced they were looking into Lance Cpl. Mason Mead after he allegedly posted images of explosives forming a swastika and a picture of himself in blackface with the message, “hello, fellow black men.”

Lance Cpl. Vasillios Pistolis was kicked out of the Marine Corps in August after he attacked a woman at the Aug. 12, 2017 “Unite the Right” rally in Charlottesville, Virginia. He was later sentenced to brig time after being found guilty at court-martial of failure to obey an order or regulation and making a false official statement.

After being arrested for flying a white supremacist banner at a May 2017 pro-confederate rally in Graham, North Carolina, Staff Sgt. Joseph Manning was discharged that December and Sgt. Michael Chesny was administratively separated from the Marine Corps in April 2018.