A charge of cruelty to animals filed against a Fort Bragg soldier accused of shooting an emotional support dog was... 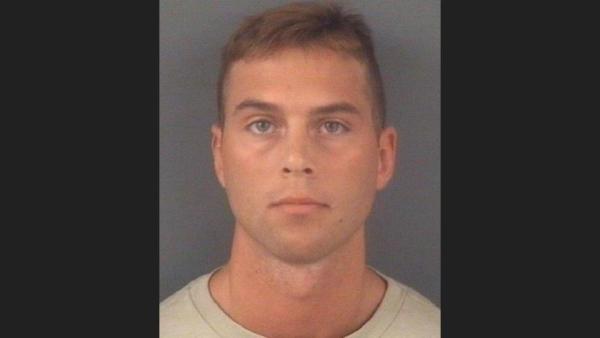 A charge of cruelty to animals filed against a Fort Bragg soldier accused of shooting an emotional support dog was dismissed this morning in Harnett County District Court in North Carolina.

Jarren Heng, 25, pleaded guilty to having a gun on educational property and conspiracy to commit cruelty to animals, according to Harnett County Assistant District Attorney Edward Page.

A charge of discharging a firearm on educational property also was dismissed. It is not clear that either defendant knew the woods where they shot the dog were within the property boundaries of the school, Page said.

“That is why the discharging a firearm on school grounds charge was dismissed upon the plea to the lesser charge,” Page said.

Heng and Marinna Rollins, 23, an Army veteran, were charged in late April with tying an emotional support dog to a tree and shooting it to death.

The dog, which was shot 10 times, legally belonged to Rollins’ estranged husband Matt Dyer who had named the dog Huey. Rollins called the dog Camboui.

Heng and Rollins filmed the incident on a cellphone.

Both were charged initially in Cumberland County as Heng and Rollins were living in Fayetteville when the dog was killed.

However, investigators later determined that the shooting took place at Western Harnett High School, resulting in the Harnett County charges.

Rollins committed suicide on May 7.

The two charges to which Heng pleaded guilty were consolidated for sentencing, Page said.

Heng was sentenced to between 6 and 17 months in prison, but the sentence was suspended. Heng will be on supervised probation for 12 months.

He also was ordered to pay a $100 fine and $450 in court costs, perform community service at an animal shelter and continue to undergo psychiatric counseling.

“Because he had no criminal record, he was not eligible to receive an active sentence on those two felonies,” Page said. “The suspended sentence was the longest he could receive.”

“The judge came up with that requirement that he perform community service at an animal shelter,” Page said.

Page said prosecutors determined that the evidence showed Rollins was the “instigator” in the shooting.

“Mr. Heng was certainly an active participant, but the shots he fired were after the dog had been shot five times by Ms. Rollins,” Page said. “A jury likely would have believed that the dog was already deceased by the time Mr. Heng fired the rifle.”

Page added that Rollins told Heng that the dog was going to have to be euthanized due to illness.

” It is so unfortunate that true justice was not served, for Cam,” Rollins’ sister, Ariana Rollins said. “He has to pay a hundred-dollar fine, for taking a life of an innocent animal. I hope he has to live everyday knowing what he did, and how many people his actions affected.”

“I am so mad,” Dyer said. “Watching that video, how could you not think he’s going to do terrible things to humans? He’s a sick person.”

He added that he felt Heng changed Rollins and that the incident wouldn’t have occurred if she and Heng hadn’t gotten together.

“He changed her as a person,” Dyer said.

Animal rights activist Donna Lawrence broke down into tears while talking about the case. She and about eight other people attended Heng’s court appearance. She said more people did not show up because they thought there would be another court hearing.

“I’m in shock. It’s ridiculous,” Lawrence said of the sentencing.

She said she was most upset about him being required to volunteer at an animal shelter.

“Who would want him working in a shelter?” Lawrence said.

Page stood by the court’s decision.

“Mr. Heng is now a convicted felon for the rest of his life, he received about as severe a punishment as he could get within the Structured Sentencing established by our legislature, and we expect the felony conviction will end his military career,” Page said. “We appreciate the public’s interest in this case, and believe the outcome in the case was just.”