During the grinding War on Terror, the Department of Defense has relied on contracted services from the civilian side to... 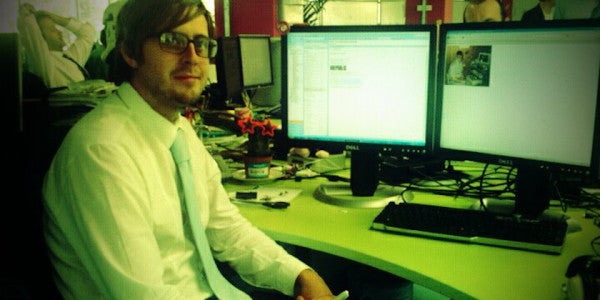 During the grinding War on Terror, the Department of Defense has relied on contracted services from the civilian side to help take care of such mundane tasks as cooking and laundry services and fighting the actual war. Contracted civilians free up our troops up for more important things, like sitting on 24-hour desk duties watching pirated movies on borrowed hard drives.

Hacking computers is apparently another of those tasks we’re about to outsource. Earlier this year, Sec. Deborah Lee James announced that the Air Force is creating a Cyber Nerd SWAT team for the Pentagon — picture kids in hoodies wandering the halls alongside general officers, Mountain Dew drips pumping into their veins as they run botnets all over Iran. There’s going to be a lot of these socially awkward, but loveable geniuses lurking the halls as the DoD builds out its broader cyber personnel workforce. It’s a beautiful notion, but adjusting to military culture is not going to be easy for a bunch of dweebs dusted in Cool Ranch powder.

Since I straddle the line between soldier and IT dirtbag, I thought I could offer some tips to young code jockeys looking to tap into that sweet taxpayer money.

1. A morally ambiguous background is no handicap.

The important thing is you never misbehave while on our dime. The DoD is very forgiving of past lapses, especially if we need to have a little surge year. On the clock though? We don’t even let troops in states with legal marijuana get high. We’re not going to let you either. Just do what the rest of us do: Get drunk and fight the townies at the questionable bars off-base.

2. Mountain Dew is what you code on, Rip-Its are what you fight on.

More than likely, Monster energy drinks make up a good portion of your blood level. You may even think that magical elixir is the pinnacle of scientifically engineered liquids approved by the FDA. You have never had a Rip-it.

Small and unassuming, Rip-Its in Iraq come in half cans and fit perfectly into a grenade pouch — the one that has remained empty since the beginning of deployment, but that a troop insists on hanging off his or her body armor anyway. You see, space is a hot commodity when setting up body armor, and between seven magazines and a first-aid kit, there’s no good spot to hang a giant Monster. But three half-cans of Rip-Its will keep your body moving and synapses firing just enough to let muscle memory kick in and get you busy deploying Stuxnet while technically blacked out.

3. You don’t have rank, which will fool soldiers into respecting you.

Soldiers are creatures of habit. We function well on schedules, otherwise every day would be like a weekend in the enlisted barracks (and no one knows where the goat from last weekend came from or what to do with it still). Because of this, we respect our hierarchy of rank and defer to it at all times. It’s the only way we know just how much respect to give a stranger. Field grade officer? I better stand up straight and not curse. A private? You don’t actually register to me as a human.

But you’re all coming in wearing civilian clothes, so we don’t really know how to deal with you. In general, most troops avoid the contractors unless we need something, and then we switch on the military charm to get what we want (i.e., working internet, a memory stick loaded with “Game of Thrones,” someone who can discretely whitelist “certain” websites for us.). This works to your advantage, since many people who are technically your boss will probably be confused by your role or outright ignore you. This gives you something many troops will never have during their career: The ability to work without someone standing over your shoulder fucking everything up.

4. You cannot out-prank a troop, and attempting to do so is hazardous to your health.

There is going to come a point where you and your military counterparts are working well together. Maybe they even invite you over to their rooms to share the wine they’ve been brewing under their bed since the beginning of deployment (if you are deployed and need a recipe, hit me up). Now that you’re all sharing a few laughs, maybe you think it’s a good time to try out a little prank or two on that sergeant who sometimes gets under your skin. You know, razz him a bit. All in good fun!

This assumption is incorrect, and any prank war you start will end in bodily damage. Most troops think physical harm is the height of comedy. Even our birthday celebrations revolve around forcibly restraining and beating the crap out of our friends. Don’t let this happen to you.

5. There are people you can discuss your irritating nerd shit with. They are in public affairs.

Seriously, just go down to the public affairs office and find someone to talk Dungeons and Dragons with. I’m sure they’ll appreciate those little painted mini figs of yours. No one else wants to hear it.

That’s it! The military is a brave new world for you, but before long you’ll be navigating this culture with ease. With any luck, you may even stay alive long enough to get back to making apps about the health of your poop, which you will probably after even time eating shitty food at the DFAC. God bless America.