If ‘Covfefe’ Were A DoD Acronym, What Would It Stand For?

On the evening of May 30, the internet lost its collective mind: President Donald Trump, known for tweeting first and... 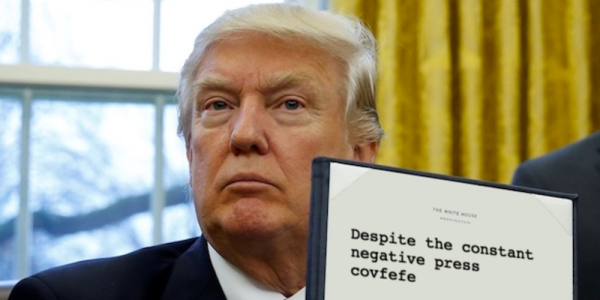 On the evening of May 30, the internet lost its collective mind: President Donald Trump, known for tweeting first and spell-checking later, dropped a hilarious typo: “covfefe.”

Don’t ask me what it means. I have no fucking idea, and it doesn’t really matter; everyone makes typos in their tweets, even if those tweets now carry the weight of U.S. government policy behind them.

But to the horde of journalists desperate for a reprieve from the crushing scandal and outrage cycle that’s plagued the Trump administration since inauguration, “covfefe” represents a chance to both blow off steam and put on their stand-up comedian hat — something political journalists, with few exceptions, do atrociously.

Don’t get me wrong, as far as typos go, “covfefe” is pretty great, the modern descendent of “dayenu” for a civil society now driven by garbage people and their garbage tweets about garbage. And given Trump’s reported propensity to blurt out classified information when it suits him, I couldn’t help but wonder: Did our commander-in-chief just let slip a secret new DARPA program, or some sort of new command focused solely on shitposting?

I asked Task & Purpose readers. Their responses made me giggle — which, in the end, is all anyone ever wanted out of “covfefe”: a moment to forget the American garbage cycle.

Here are some tweets. Leave me alone.

The truck they shoot off aircraft carriers to test the catapult.

Honestly, this one seems the most plausible: