A U.S. military veteran in Rhode Island says efforts to make neighbors aware of her post-traumatic stress disorder ahead of... 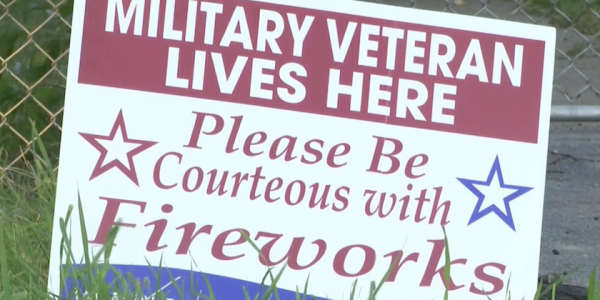 A U.S. military veteran in Rhode Island says efforts to make neighbors aware of her post-traumatic stress disorder ahead of the Fourth of July holiday have been foiled by someone who has stolen a fireworks courtesy sign from her yard, the Associated Press reports.

Bristol resident and Navy vet Maegan Antunes told her local NBC affiliate that she has suffered from PTSD since her third deployment on an aircraft carrier and that unexpected fireworks can trigger her anxiety.

“Being on a Navy ship, you don’t really think you’re going to see what everyone else is seeing on land — the ones in the military that are on land actually fighting there,” Antunes said. “So, what we witnessed at that time was not a normal thing we expected would happen. Let’s just say that.”

Antunes said that the purpose of the sign — which reads “Military Veteran Lives Here. Please Be Courteous With Fireworks” — wasn’t to discourage neighbors from shooting fireworks, but rather to politely request that they either notify her before they do — or ask her to join in on the fun.

This isn’t the first time Antunes has had to deal with larceny seemingly related to her veteran status. In fact, this is the second time in a month that someone has stolen a fireworks courtesy sign from Antunes’ yard. A military license plate was removed from her car as well, according to the Associated Press. Police are investigating both incidents.

“It’s truly outrageous that someone would do that to this young woman,” Antunes’ neighbor, Linda Guevremont, told NBC.

Meanwhile, Independence Day looms right around the corner. And while Antunes has purchased a third sign, she is unsure whether or not she’ll put it in her yard.