An algorithm created by two University of Illinois researchers may pave the way to software that can guess what a... 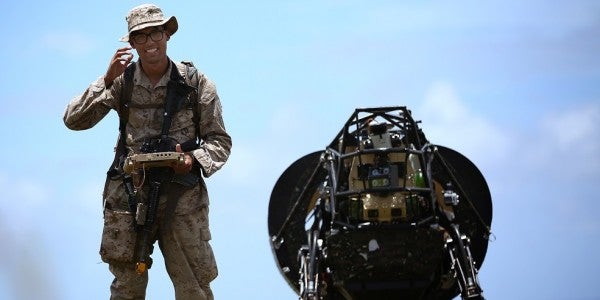 An algorithm created by two University of Illinois researchers may pave the way to software that can guess what a person is about to do — whether it’s letting go of a steering wheel while driving, or something more sinister, like reaching for a gun — milliseconds before the person does it. Researchers Justin Horowitz and James Patton described the work they did under a National Institutes of Health Grant in the Sept. 1 article “I Meant to Do That: Determining the Intentions of Action in the Face of Disturbances” for the science journal PLOS ONE.

“It doesn’t predict the person’s goal,” wrote Horowitz about the algorithm in an email to Defense One. “It recovers the entire path the person would have taken either as it happens or after the fact. Because it’s a path, there’s no right/wrong. There’s just an estimate and some uncertainty.”

The goal behind the research was to help robots to help humans, but the algorithm has far-reaching security and defense applications, though at this stage it is still hypothetical.

“We want to temper what we say about security because it has not been tested and would require some restrictions on what needs to be known, but we have also thought about applying this to dynamic security situations,” added Patton. “An example might be understanding what a person intends to do.”