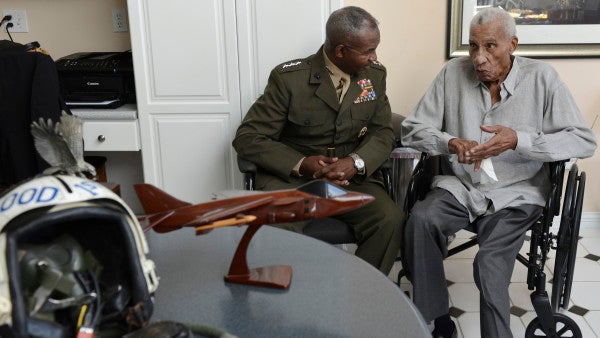 Frank E. Petersen Jr., the first black Marine aviator and the first black general in the Marine Corps, died Aug. 25 in his home near Annapolis, Maryland, at the age of 83. Petersen enlisted in the Navy in 1950 and would earn his commission in the Marine Corps two years later as a second lieutenant. He retired in 1988 as a lieutenant general. The New York Times explores Petersen’s hardships in the early years of integration, and his successes in the decades following.

“An instructor flunked him in training and predicted he would never fly,” the Times writes. “On his first day at the Marine Corps Air Station in El Toro, Calif., a captain claimed he was masquerading as a lieutenant and had him arrested. In Hawaii, a landlord refused to rent a house to him and his wife, and admitted to a subsequent prospect that he did so because they were black.”

A career Marine, Petersen was not only successful as a black man in a time where integration was still highly contentious, but also as an aviator and a leader.

“Just to be able to say you kicked down another door was such a great satisfaction,” Peterson once said.