The Problem With Donald Trump’s Plans For The Military

Responding to Donald Trump’s words on veterans and war is a formidable challenge. Much of what he’s had to say... 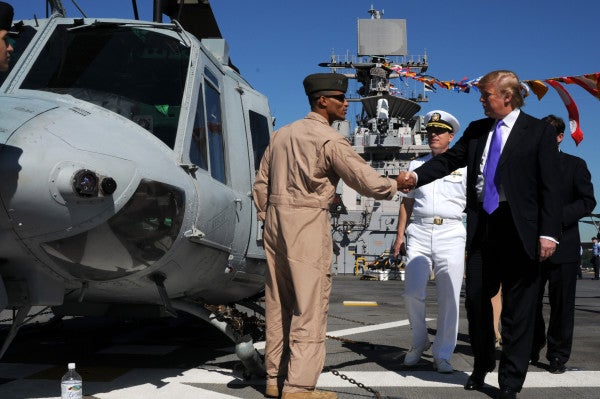 Responding to Donald Trump’s words on veterans and war is a formidable challenge. Much of what he’s had to say thus far in the presidential race lacks experience, reason, or logic.

How exactly does one respond substantively to things like what Trump said of John McCain: “He is not a war hero. He is a war hero because he was captured, I like people that weren't captured, OK? I hate to tell you.”

Or here’s Trump on his experience at a military high school: according to a forthcoming book, Trump “always felt that I was in the military.” and received “more training militarily than a lot of the guys that go into the military.”

But the latest Trump quote going around has little to do with his opinion of McCain or his views on his own experiences. The latest episode surrounds how Donald Trump would run the American military if he were to be elected commander-in-chief.

It’s not the first time Trump has delivered such a line. At a speech in Mobile, Alabama, in July, Trump said, “You know the thing I’ll be great at that people aren’t thinking? And I do very well at it. Military. I am the toughest guy. I will rebuild our military. It will be so strong, and so powerful, and so great. It will be so powerful and so great that we’ll never have to use it. Nobody’s going to mess with us, folks. Nobody.”

At first glance, it’s easy to dismiss this line as another glossing over of the complex military, foreign policy, and other policy discussions that politicians are supposed to be experts with. Thus far through the campaign season, Trump has occasionally come across like a student who neglected to read the book, but is still convinced he can ace the test.

The obvious problem, of course, is that the United States already has the most powerful military in the world by a long shot. The U.S. currently spends more on military and defense than the next seven top countries in the world combined. We spend roughly three times more on defense spending than China, and roughly six times more on defense spending than Russia, the two countries that Trump claims he as president would stand up to.

When Trump says he would rebuild our military to make it the best in the world, what exactly does he think is wrong with it? Who does he think has a stronger military right now?

But there’s a bigger problem, a philosophical problem. Trump’s military philosophy perhaps gives us insight into his background as a businessman. In his world, every party is a rational actor. Deals get made over dollars and cents; interests and preferences are apparent and communicated.

In this world, Trump would be right. Why would anyone go to war with a country with a military the size of the United States? In a conventional war, they would get trounced. Of course, people who study international relations know this. That’s why modern democratic societies don’t fight one another. Democratic societies behave rationally, and the weaker party would never commit to a war that it would lose.

The issue with Trump’s line is that in the real world, there are irrational actors. Wars are fought with both parties seeking asymmetrical advantages. The 9/11 hijackers didn’t compare their might to that of the U.S. military before planning their attack, nor does the rest of al Qaeda, nor does the Islamic State, nor does the Taliban. Terrorism itself becomes an rational act for groups that are so small and so radical that they could never advance their agenda without resorting to violence and fear.

In this real world, this modern world where terrorism is such an enormous part of national security concerns, it is painfully important that anyone who seeks to run the country understand this. An inability to grasp this reality is perhaps why a tough-talking businessman is not well suited to step into the West Wing.

Trump claimed to have learned more at a military high school than people learn in the actual military. I beg to differ.