How To Get A Special-Edition Commemorative Donald Trump Coin

It may be a few years before the U.S. Mint sees fit to honor our 45th president by putting his … Continued 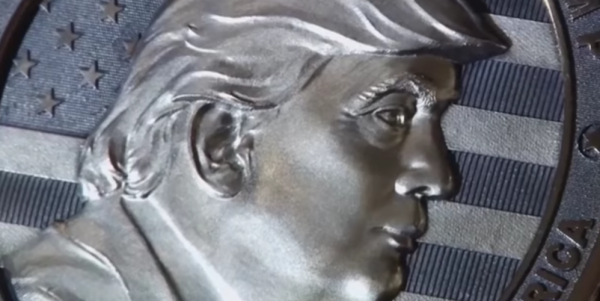 It may be a few years before the U.S. Mint sees fit to honor our 45th president by putting his face on a banknote — is there a $1 billion bill? — but if you’re not inclined to wait, you can now obtain a giant coin bearing Donald Trump’s likeness, in either silver or gold.

From Russia, with love.

Art-Grani, a Russian metalworks located in Chelyabinsk, is producing 45 of the commemorative coins, which are nearly 5 inches in diameter, and bear the president-elect’s profile on one side and an image of Lady Liberty on the other. The silver editions will retail for “a few thousand dollars,” the company’s director, Vladimir Vasyukhin, told the Associated Press Television Network, and two will be made in gold.

The inspiration for the coin, Vasyukhin added, is the expectation that the incoming administration will usher in a warm new relationship between the United States and Russia. “There are more hopes associated with Trump with regards to the lifting of sanctions,” he said. “Maybe the environment will change.”

The company produces what it describes as “special items for special people on special occasions,” according to Google’s translation of its website. Also for sale are an array of plaques and knives, mostly for use as corporate gifts. The daggers are pretty badass. Such a gift, the site explains, “is primarily a sign of respect and reverence. Seeing a gift in his office, people will remember you fondly.

“Each product,” the site adds, “will invest in a piece of the soul.”

Check out the video.

Meanwhile, the McClatchy news agency reported yesterday that the FBI, CIA, NSA and other agencies are investigating the possibility that the Kremlin covertly sent money to the United States to aid the Trump campaign.

Um, guys, if you’re talking about 5-inch coins, they’re not actually legal tender. Of course, that could change…