The Air Force Is Waging A War On Mosquitoes In Texas

The historic rainfall and devastating floods of Hurricane Harvey are still wreaking havoc on residents of Texas, but not in... 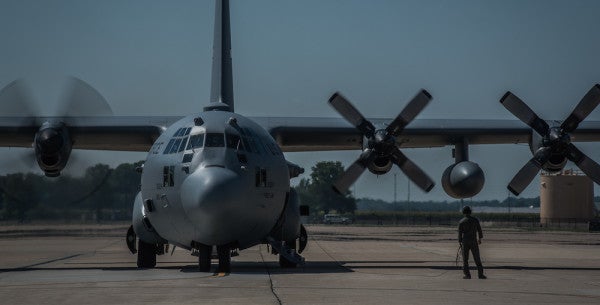 The historic rainfall and devastating floods of Hurricane Harvey are still wreaking havoc on residents of Texas, but not in the way you’d expect. Residual standing water has turned communities across the Gulf Coast into swampy cesspools of liquid waste, perfect for breeding mosquitoes.

Don’t worry, though: the Air Force is on it.

When the Texas Department of State Health Services realized that mosquitoes would begin breeding like wildfire, it called in the 910th Airlift Wing to treat Harris, Liberty, and Montgomery counties with airborne insecticides in an aerial campaign against the bloodsucking bugs, according to ABC 13 News.

As of Sept. 8, Air Force Reserve's 910th Airlift Wing, stationed at Kelly Air Force Base in San Antonio, is now flying modified C-130 cargo planes on “aerial spray mosquito” missions, attacking them in the dead of night. While that may sound silly, this business is no joke — and the reservists, like the mosquitoes themselves, are out for blood.

“Basically, these bugs fly at night and with us being able to trail and prepare and be able to fly with night vision goggles, we have increased the kill rate, if you will, of these insects,” Lt. Col. John Boccieri with the 910th Airlift Wing told ABC 13.

Health officials are hoping this effort will curb the spread of mosquito-borne diseases, which sickened more than 37,000 Americans in 2016, according to Vector Disease Control International.

Of particular concern is Zika, the illness that sparked anxiety in the tropics in 2016. Between 2015 and 2016, Texas saw reports of 323 cases of Zika, the mosquito-borne virus that causes microcephaly (smaller heads as a result of disrupted brain development) in fetuses, Reuters reported, and the state has seen 71 cases so far this year alone. And that was before Harvey rocked the coast.

Sitting water across Texas could create a health crisis if left untreated. The spray missions will likely cover upwards of 7 million acres, according to WKBN 27. In the meantime, state officials have advised locals to wear long sleeves and pants to avoid being bitten. But with Gulf Coast temperatures still hovering in the high eighties, it seems unlikely that anyone’s going to take that advice.