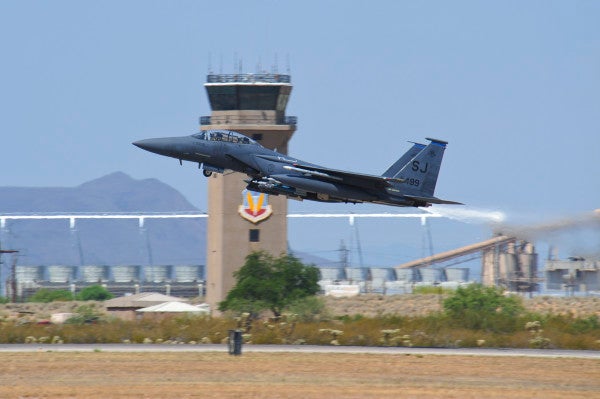 Seymour Johnson Air Force Base is the only active Air Force Base in North Carolina, since the Army took over Pope AFB at Fort Bragg. It is situated in Goldsboro, NC and is home to over 4,000 service members.

Seymour Johnson AFB was activated in 1942 and deactivated in 1946. In 1952, it was rebuilt and reopened in 1956. Today, Seymour Johnson Air Force base spans over 3,300 acres and is home to the 4th Fighter Wing and 916th Air Refueling Wing. F15’s and are common sights and sounds around this base that also hosts a spectacular biannual air show titled Wings Over Wayne.

Should you live on post or off? Corvias Military Living is the leasing agent for on-post living. It’s a good idea to do thorough research of both on and off-post housing before committing to it. Check out all of your options prior to making a final decision and signing a lease. For off base neighborhood reviews from fellow mil-families check out PCSgrades.com.

There is one Commissary, one gym, an Airman Family Readiness Center, several parks including a dog park, a golf course, and a splash pad for kids.

Note-worthy places to visit within the state of NC:

The climate varies, but North Carolina has four seasons. A mild climate sums up Goldsboro NC pretty well as agriculture is booming in this area throughout three of the four seasons. Late December to early March is considered winter time with lows in the 20’s and highs in the 60’s. Mid-March through early May is spring time with warm days, cool nights, and a multitude of rain. Late May through early September is summer time with highs sometimes reaching into the 100’s and lows in the 60’s. Mid-September through Mid-December is fall with temperatures varying from lows in the 50’s to highs in the 70’s.

WHAT MAKES SEYMOUR JOHNSON AIR FORCE BASE SO WONDERFUL?

Seymour Johnson Air Force Base is located just under two hours from the North Carolina coast. If being so close to the coast isn’t reason enough to love it here, I am sure the patriotism around Wayne County will make you feel right at home. Small town living, agriculture, and locally owned businesses are characteristic of this tight knit community.