Working Through The Invisible Wounds Of War

Editor’s note: June 27 marks PTSD Awareness Day. Enacted by Congress in 2010, the day is supposed to raise awareness of the... 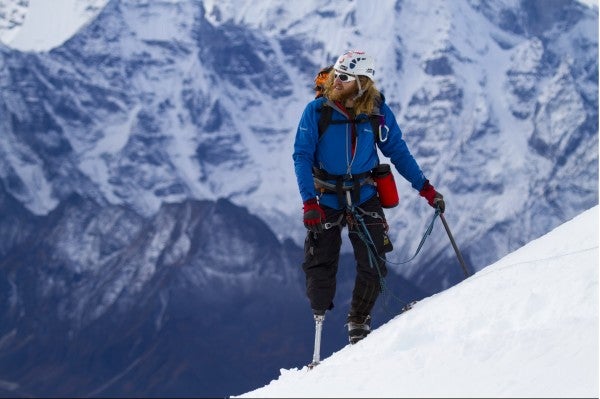 Editor’s note: June 27 marks PTSD Awareness Day. Enacted by Congress in 2010, the day is supposed to raise awareness of the condition, its effect on individuals and their families, and possible treatments. In a June 20 article in USA Today, Gregg Zoroya wrote about the “potential flood of war-related” cases of post-traumatic stress disorder that scientists anticipate. According to a 300-page report, cases of service-connected PTSD increased tenfold between 2004 and 2012 to more than 650,000 among Iraq and Afghanistan veterans. And more veterans are coming to the realization that they may not have escaped the invisible wounds of war.

Andrea Signor first interviewed Chad Jukes in 2009 for Climbing Magazine. There, he shared his outlook on losing part of his leg and the concept of post-traumatic growth. “I am mentally stronger now than I was before,” he had said. Five years later, he reflects on the invisible wounds that he previously denied or avoided discussing.

On Dec. 17, 2006, Chad Jukes’ vehicle rolled over a roadside bomb near Tikrit, Iraq. The blast broke the 22-year-old Army staff sergeant’s femur and shattered his heal. He made the decision to amputate his right foot after numerous surgeries failed to relieve the pain and restore his ability to walk.

“This wasn’t a decision to end my life,” says Jukes, now 30. “I chose to live my life — making a decision to get rid of something horrible.”

The day after he received his first prosthesis in the spring of 2007, he went climbing. A native of Logan, Utah, Jukes said he couldn’t imagine life without the sport. He refined his foot, chopping off the toes and adjusting the angles of the ankle so he could climb.

Over the next five years, Jukes traveled the world, climbing with other veterans and amputees in Ecuador, the Himalayas, Yosemite, California, and Mount Rainier in Washington.

His outgoing, jovial nature endeared him to many. He became an advocate for Paradox Sports, a nonprofit devoted to helping people with disabilities experience the outdoors. He participated in climbs with Camp Patriot, another nonprofit that helps wounded and disabled veterans in a similar fashion. In 2012, he was featured in the film “High Ground,” which documented a climb up Mount Lobuche in the Himalayas with 11 wounded warriors.

But despite his impressive resume and positive outlook, something unsettling rested just below the surface.

“A few years ago I started thinking, ‘Maybe I’m not fine,’” says Jukes. “Now, I’m thinking it has affected me the more than I realized.”

In the past when people asked him how he lost his leg, Jukes said he chose to lighten the conversation, masking the emotion of his story with humor.

“I usually told people, ‘Oh, I got blown up,’” he says. “Now, I’m trying to think of how to appropriately tell people.”

“The physical and visible is easy to deal with, but the signature injuries of these wars is PTSD and — both of which I experienced, but avoided and denied.”

For years Jukes says there were warning signs.

“I was forgetting things,” he says. “Therapists told me to write things down and I did, but I’d write something — a phone number, a name — on a piece of paper and put it in my pocket and a week later find this crumpled up piece of paper and go, ‘What the heck is that?’ and I’d throw it away.”

“So many times I’d have a conversation with someone thinking I’ll remember what was said and five minutes later, it’s gone,” Jukes explains.

“It was really hard for me to remember a name. I would meet someone, shake their hand and one minute later I was unable to repeat it, even if I made an effort. And it wasn’t just names, it was faces. I would meet someone and have no recollection of who they were or ever meeting them.”

When Jukes enrolled in the online program with Colorado State University, he couldn’t ignore the problems any more.

“School used to be really easy for me, but now, it’s really hard,” he says. “I used to be able to write a paper that was pretty cohesive and coherent in an hour; now, I spend hours doing research and being stuck, unable to get anything done.”

Jukes began seeing a therapist who, he says, has helped him learn about cognitive processing and the body’s physiological response to trauma.

“When something bad or scary happens, our primitive mind has a reaction,” he says. “As humans, we suppress that reaction to be strong and powerful.”

Avoiding that emotional response, Jukes says, has contributed to his symptoms. Now, he’s learning to tell his story while allowing himself to experience the emotions.

“One example of a stuck point is good things happen to good people and bad things happen to bad people. A bad thing happened to me, so I must be a bad person. I don’t deserve to be happy or successful,” he says. “You have to analyze critically what happened to you and why —- what has prevented you from recovering.

“For me, it was the senselessness of war.”

“I wanted to play the trumpet,” he says. “I joined the reserves. I didn’t think I would deploy, but I really started to enjoy the camaraderie and the sense of mission.”

On his first deployment to Afghanistan, Jukes says he was first confronted with the reality that he may have to take a human life.

“One night there was a security breach on the base,” he says. “I was guarding the compound. I was the only uniformed personnel there on the outside perimeter. There was a Pakistani truck driver who reported that a man with a gun had climbed the wall.”

“I was hunkered down with my M249 Saw. I thought to myself, ‘I might have to kill somebody and I have to be OK with that.’”

He didn’t have to kill that night, but Jukes says that as he revisits that night and the day he was injured, he thinks about the war from “the enemy’s perspective.”

“We were both at war,” he says. “We were there for our own reasons. You can say this guy is a ‘raghead’ or a jihadist, but maybe somebody said to them, ‘If you don’t do this, we’re going to kill your entire family.’”

“The guy that blew me up was probably not a jihadist. He was probably acting because something bad happened to him or his family. How can I blame this guy for picking up a gun and fighting?”

Jukes says he recognizes that he faces a long and emotional path ahead. As he works through the stress, he continues with his passions: advocating for veterans and climbing.

“When I think through what happened to me, it’s hard without getting completely overwhelmed,” he says. “The thought of it happening to anybody else — my friend or enemy — is horrific. I don’t want anybody else to go through what I went through.”