Hobby Lobby Breaks General Order No. 1 In The Most Epic Way Imaginable

Iraq may have felt like the Wild West for U.S. service members deployed there over the past decade and a... 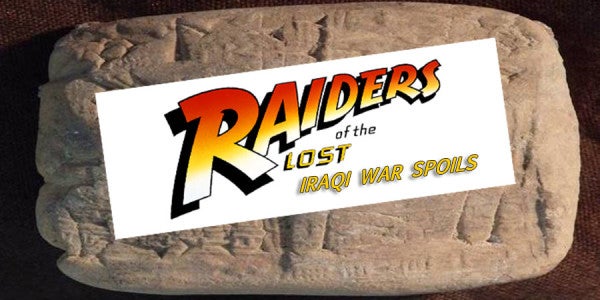 For politically influential corporations like Hobby Lobby, the rules were apparently a little different.

In a plot so bad it sounds like a rejected Indiana Jones spec script, the Department of Justice announced July 5 that the U.S. crafts store, long known for its biblical and political activism, has confessed to smuggling thousands of ancient artifacts — mostly cuneiform tablets from the dawn of humanity’s written culture — out of Iraq, through the U.A.E., and into the United States in packages labeled as… tile samples.

“It belongs in a museum!”US Department of Justice

But the whole point of the rule is to prevent U.S. forces overseas from looking like — or, you know, actually being — imperialist occupiers looting war spoils.

Federal prosecutors claim that Hobby Lobby not only knew better, but dealt in dirty spoils anyway. Sometime in 2009, the company’s president and an aide traveled to the U.A.E. to check out 5,500 ancient Iraqi written tablets offered for sale. The following year, a legal consultant “warned the company that the acquisition of cultural property likely from Iraq, including cuneiform tablets and cylinder seals, carries a risk that such objects may have been looted from archaeological sites in Iraq,” the DOJ statement said.

Hobby Lobby was warned. Hobby Lobby persisted. Rather than drop the sale like the hot fence that it was, the company bought up the artifacts for $1.6 million, wired to seven different accounts. Hobby Lobby then arranged to have the tablets shipped to three corporate addresses in the U.S., labeled as “‘ceramic tiles’ or ‘clay tiles (sample)’” from Israel, the feds say.

As part of a settlement, Hobby Lobby has agreed to return the ancient artifacts and pay $3 million restitution to the U.S. government.

In a statement to the New York Times, Hobby Lobby president Steve Green said that “regrettable mistakes” were made, but the company’s fetish for Iraqi archaeological goodies was simply “consistent with the company’s mission and passion for the Bible.”

Seriously? What kind of people justify stealing ancient Middle Eastern artifacts so they can use them to bask in God’s Old Testament power?