For the second year in a row, President Donald Trump’s budget proposal will include an increase in spending for the... 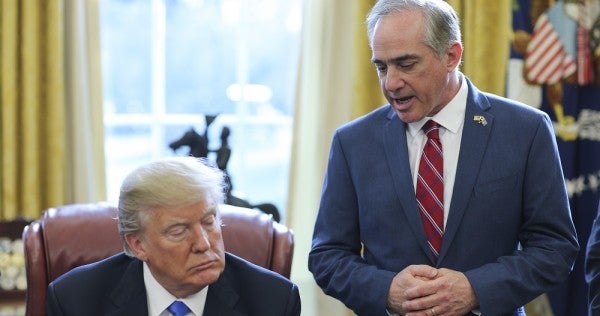 For the second year in a row, President Donald Trump’s budget proposal will include an increase in spending for the Department of Veterans Affairs, bringing the department’s allowance to $198.6 billion in fiscal 2019 — roughly $12.1 billion more than this year.

If approved, the increase would mark a significant boost for the VA’s budget at a time when federal agencies that don’t wage wars or cover vets are facing historic cuts.

When the war in Afghanistan began in 2001, the department’s budget was $49 billion, according to Military Times. In fiscal year 2009, it was still just $93.7 billion — less than half of President Trump’s new proposal. Here’s what the budget proposal, released publicly Feb. 12, means for the VA.

Here’s where additional funds would be headed.

The budget for medical care comes out to roughly $76.5 billion and includes: a $1.8 billion increase in funds for homeless and at-risk veterans; $727 million for medical and prosthetic research — $87 million more than this year’s budget — to support roughly 2,200 projects; $511 million for gender-specific healthcare services for female veterans; $382 million for opioid treatment and pain management. Additionally, $8.6 billion will be allotted for mental health services, and President Trump’s January 2018 executive order to provide transitioning service members with a year of mental health care services through the VA.

Other increases in the budget include provisions for $14.2 billion for the VA’s Community Care program — roughly 9.1% more than this year — as well as $1.2 billion for electronic health record modernization.

Costs are still being cut in VA, however.

The new budget proposal also comes with some cost-cutting measures — some of which are likely to be controversial among veterans and advocates alike, such as a rounding-down of cost-of-living increases. The decision would cut the annual increases in vets’ cost-of-living benefits by rounding the number down to the nearest whole dollar.

The cut is estimated to cost individual vets no more than $12 a year, Military Times’ Leo Shane reported Feb. 12. But when tallied up, that decision could save the VA $34 million next year alone, and $2.3 billion over the next decade. That said, some veteran service organizations remain opposed to the idea.

“Frankly, we just don’t believe it’s fair to nickel and dime veterans, and to pay for other benefits that way. It’s not something that we agree with,” Carlos Fuentes, the national legislative service director for Veterans of Foreign Wars told Task & Purpose.

The proposal also includes simplifying net-worth calculations for disability compensation and lowering the threshold for some medical evaluations, which could save some $1.2 billion over the next decade, Military Times reports. One change involves spending a little more in the short term — roughly $72 million — on VA Vocational Rehabilitation services to increase them from 18 months to two years. But over the next decade, the move would save the department $206 million overall.

Another cost-cutting measure involves placing a cap on GI Bill tuition payments for flight training at public schools, which would save the department $500 million over the next 10 years. The use of GI Bill bennies to pay for flight school has come under fire in recent years, due to concerns over graft and overcharges.

“There are some flight schools that have just charged astronomical fees and tuition for veterans,” Fuentes told T&P.; “There’s essentially a loophole where they partner with public institutions and aren't limited on how much they can charge, and changing that is something we support.”