Only the dead have seen the end of war. 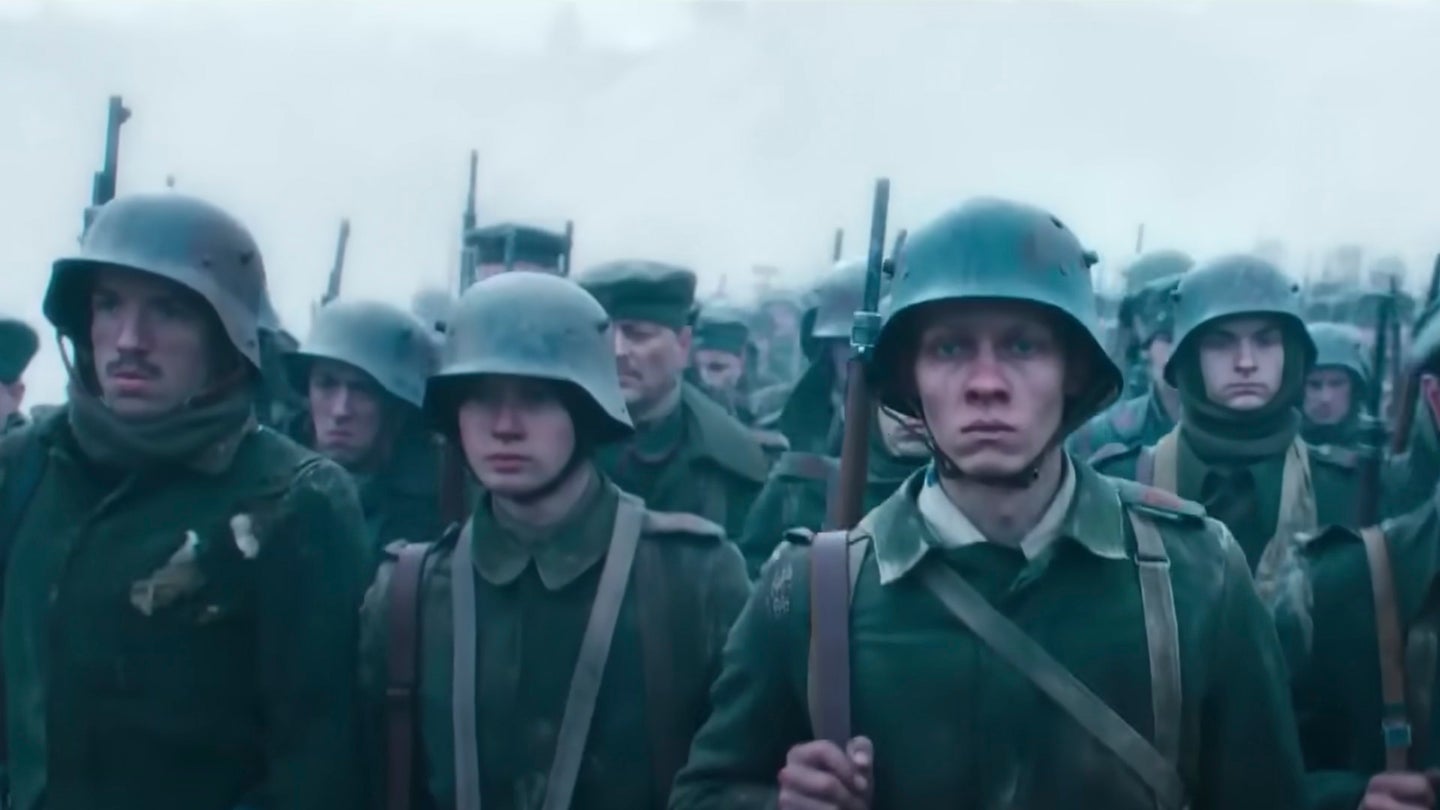 The trailer for Netflix’s upcoming adaptation of All Quiet on the Western Front looks as if it might finally do justice to Erich Maria Remarque’s classic World War I novel.

Remarque’s book has already been adapted for the screen twice: An Oscar-winning 1930 Hollywood film and a 1979 movie. But the Netflix version finally casts German actors in the story about German Frontsoldaten in the trenches.

Anyone who’s ever been screamed at by a German knows that language was invented to bark orders and yell over loud noises. Thus, if you want to accurately portray German troops, you need real German actors. Quentin Tarantino recognized this, so he made sure that German soldiers and SS officers in his masterpiece Inglourious Basterds were played by native German speakers, including Daniel Brühl — who coincidentally also stars in the newest adaptation of All Quiet on the Western Front.

Another thing that is apparent from the roughly two-minute trailer for All Quiet on the Western Front is that it gets the ages for the German soldiers correct. Most American war movies cast men to play junior enlisted service members who are at least 10 years too old for the roles. But the German troops we see at the beginning of the trailer look more like the boys who actually go to war. (In his novel Slaughterhouse-Five, American author Kurt Vonnegut Jr. recounted how he promised to the wife of a fellow soldier captured by the Germans during World War II that he would recognize how young they were at the time by calling his book The Children’s Crusade.)

The new adaptation is the latest big-budget film in recent years to tackle the horrors of World War I, after The King’s Man (also starring Bruhl) and 1917, which was nominated for Best Picture at the Academy Awards. The new German All Quiet on the Western Front has already been selected by Germany as its entry for the next Oscars.

In the traditions of the best German war movies, such as Das Boot and Downfall, the Netflix adaptation of All Quiet on the Western Front looks to be relentlessly grim. The trailer shows one scene in which French troops systematically immolate German trenches with flamethrowers, so you know the filmmakers are not going to shirk from giving the act of killing back to those who have to commit it.

Remarque’s portrayal of trench warfare was so bleak that his book was later banned by the Nazis. The author fled Germany after Hitler took power, eventually settling in the United States, but the Nazis got their revenge by beheading his sister in December 1943 after a sham trial. The German judge allegedly told Elfriede Remarque before sending her to the guillotine: “‘We have sentenced you to death because we cannot apprehend your brother. You must suffer for your brother.”

Importantly, it appears from the trailer that All Quiet on the Western Front addresses why World War I became the prelude for a much greater war just 20 years later. In one scene, we can see Daniel Brühl signing what appears to be the armistice that ended fighting on the Western Front in 1918. The German army’s high command was unable to admit that they had been beaten in the field, so they falsely claimed that Germany’s November 1918 revolution that ousted the Kaiser had stabbed the army in the back.

Hitler, who had served as a lance corporal in the German army during the war, was able to use that lie to blame Germany’s defeat on Jews, communists, and other so-called enemies. It is a timely lesson for today’s post-fact information environment: Lies kill.

What All Quiet on the Western Front seems to be striving to capture is that humanity’s greatest problem is itself, and until we find a way to treat each other humanely, wars will never end.