Twin brothers who helped shape one of the Air Force’s most well-known symbols were honored with a fitting send-off. 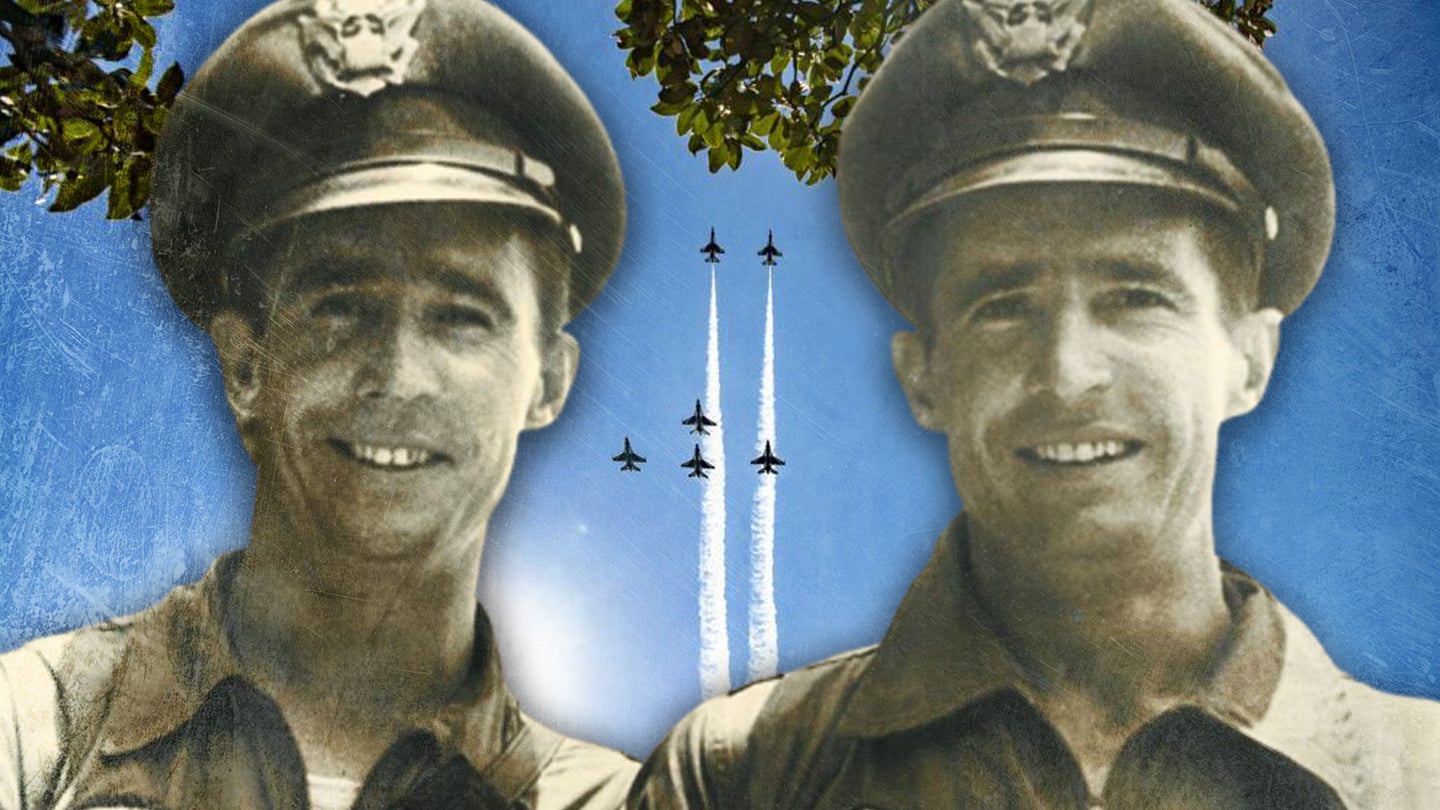 U.S. service members are often referred to figuratively as “brothers in arms,” but the phrase applied literally to two airmen who were buried in Arlington National Cemetery last month.

Though “Bill” Pattillo and “Buck” Pattillo passed away in 2014 and 2019 respectively, they were not inurned at Arlington until Sept. 14. The inurnment had been postponed until they and their wives, Joyce and Bobbie, respectively, passed away “and could be laid to rest together,” according to Airman Magazine.

The aerial demonstration team, which the two pilots helped form, flew a one-of-a-kind send-off. As the team of six F-16 fighter jets flew over the cemetery, the left and right wing pilots, Maj. Ian Lee and Maj. Lauren Schlichting, pulled up in the team’s first-ever dual “missing man” formation, a maneuver they dubbed the ‘Pattillo Pull.’

“In honor of those before us,” the Air Force wrote in a Facebook post about the formation on Friday.

The story of the Pattillo brothers is remarkable in part because of how the two seemed to be in lockstep throughout their distinguished careers in the dangerous world of military aviation.

The Atlanta, Georgia natives both enlisted in the Army Air Forces in 1942 and received commissions and pilots’ wings in March 1944, according to their command biographies. They then flew P-51 Mustang fighters with the Eighth Air Force’s 352nd Fighter Group, where they protected B-17 bombing raids over Germany and strafed ground targets, according to “Bill” Pattillo’s 2014 obituary. Near the end of the war, Bill was shot down while strafing a German airfield and taken prisoner in April 1945, according to the Georgia Aviation Hall of Fame.

Bill was released by the end of the war, and he and his brother were released from active duty in 1945. They then flew P-47s for the Georgia Air National Guard, but in 1948 they were both recalled to active duty and eventually stationed in Germany, according to the Georgia Aviation Hall of Fame. The jet age had arrived, so the Pattillo brothers got to work flying F-80 Shooting Stars and F-84 Thunderjets. They had what must have been a fun gig: the twins helped stand up the Skyblazers, the aerial demonstration team for U.S. Air Forces in Europe.

“The F-80 was the Air Force’s first operational jet fighter, and one of the reasons the USAFE authorized the creation of the Skyblazers was to demonstrate the capabilities of jets to European pilots and officials,” wrote HistoryNet in a 2018 article.

“Buck” Pattillo flew left wing and alternate lead for the Skyblazers in more than 250 airshows across western Europe and the Mediterranean Sea, according to his command biography. In 1952, he was assigned to Luke Air Force Base, Arizona, followed shortly after by his brother. Together, they drew upon their aerial acrobatics experience to “form the nucleus” of the newly-founded Thunderbirds, according to HistoryNet. Buck and Bill took up their old spots of left and right wing, respectively, flying F-84 Thunderjets painted in the red, white, and blue livery that the team still sports today.

“They helped develop many of the maneuvers still performed today, including the famous “Bomb Burst” that remains the finale at Thunderbird air shows,” according to Bill’s 2014 obituary.

After the Thunderbirds, the brothers flew Air Force jets in Louisiana, Virginia, and Europe, though they were not always stationed at the same place at the same time. They both received degrees in mathematics from the University of Colorado, Boulder and international affairs at George Washington University; and attended the U.S. Army War College at Carlisle Barracks, Pennsylvania. They both deployed to southeast Asia during the Vietnam War: Buck to Ubon Royal Thai Air Force Base, Thailand, where he flew 120 combat missions in F-4 fighters starting in March 1968; and Bill to Bien Hoa Air Base, Vietnam and then Tuy Hoa Air Base.

Upon returning home from Vietnam, both brothers went on to serve in some of the highest echelons of Air Force command, though they were not together in their later careers as much as they had been at the start. Buck served with the Joint Chiefs of Staff, Pacific Air Forces, and U.S. Readiness Command (later replaced by U.S. Special Operations Command), while Bill worked for Headquarters Tactical Air Command; U.S. Air Force Headquarters; Allied Forces Central Europe, and other commands.

“The Arlington National Cemetery internment of these brothers in life and service honored their accomplishments and contributes to our Air Force heritage,” wrote Air Force Chief of Staff Gen. Charles ‘CQ’ Brown Jr., who attended the ceremony.