The Air Force has just released the new criteria for the “V”, “C”, and “R” devices to be affixed to... 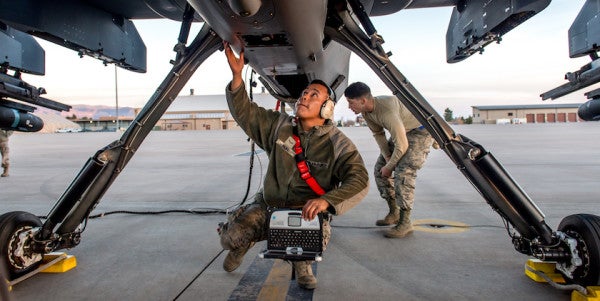 The Air Force has just released the new criteria for the “V”, “C”, and “R” devices to be affixed to military medals, reflecting significant revisions made to the Department of Defense’s decorations and awards program last year to recognize drone pilots, according to the service.

“As the impact of remote operations in combat continues to increase, the necessity of ensuring those actions are distinctly recognized grows,” DoD officials said in January 2016 following a comprehensive yearlong review of its awards. The new devices, including the “R” for “remote” service, can be retroactively awarded back to Jan. 7, 2016.

While drone pilots have played a crucial role on the post-9/11 battlefield, efforts to recognize their contributions have met with fierce resistance from groups like the Veterans of Foreign Wars, which successfully quashed a 2013 proposal by then-Defense Secretary Leon E. Panetta to create a “Distinguished Warfare Medal.” The chief concern was that the decoration would rank higher than other medals earned in combat, according to The New York Times.

Now, airmen who contribute directly to the fight but aren’t exposed to hostile action can be acknowledged in a way that doesn’t diminish the contributions of their boots-on-the-ground counterparts… or so the thinking goes.

“The ‘R’ device, which may be affixed to non-combat performance awards, was established to distinguish that an award was earned for direct hands-on employment of a weapon system that had a direct and immediate impact on a combat or military operation,” the Air Force said in a statement.

Those eligible for the “R” device include airmen assigned to cyber operations and intelligence, surveillance and reconnaissance operators. “These members create direct combat effects that lead to strategic outcomes and deliver lethal force, while physically located outside the combat area,” said Lt. Gen. Gina Grosso, the deputy chief of staff for manpower, personnel, and services.

Meanwhile, the “C” or “combat” device was “created to distinctly recognize those service members performing meritoriously under the most difficult combat conditions,” according to the Air Force. And of course, “V” stands for “valor” — the awarding of which “will ensure unambiguous distinguished acts of combat heroism.”

The new devices serve a bigger function than simply recognizing individual airmen for meritorious service. The deployment of drone strikes and cyber weapons has spiked dramatically in recent years, putting a strain on the Air Force as it’s scrambled to keep up with the pace of operations, according to Business Insider. The “R” device is intended to bring more prestige to those jobs, and thus increase the appeal to potential recruits.

And while they may not be exposed to enemy fire, a 2013 DoD study concluded that drone pilots suffer from many of the same combat-related mental health issues — like depression, anxiety, and post-traumatic stress — as pilots of manned aircraft, and at the same rate.

“Remotely piloted aircraft pilots may stare at the same piece of ground for days,” one of the co-authors of the study told The New York Times in 2013. “They witness the carnage. Manned aircraft pilots don’t do that. They get out of there as soon as possible.”