Police Detain Man For Walking With His Hands In His Pockets, Which Marines Find Hilarious

Anyone who has served in the Marine Corps knows that among the most asinine of regulations is the informal prohibition... 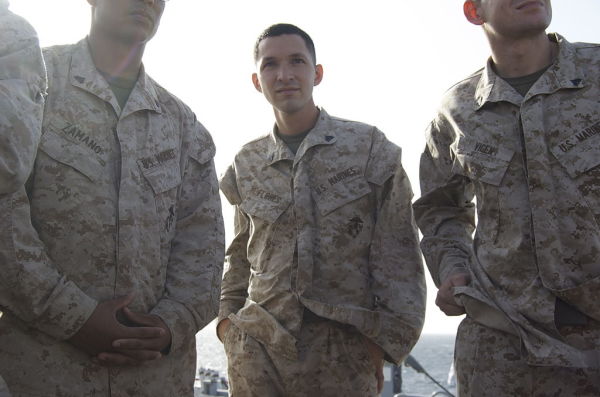 Anyone who has served in the Marine Corps knows that among the most asinine of regulations is the informal prohibition barring walking in uniform with hands in your pockets.

Walking with your hands in your pockets reflects an absence of discipline that erodes the fighting spirit of the Marine Corps and empowers al Qaeda, or something.

Max Uriarte at Terminal Lance has previously lampooned this tradition as being utterly ridiculous, and yet it persists.

It’s not formally codified anywhere, but try walking on any Marine base in uniforms with your hands in your pockets. The staff noncommissioned officers will come after you like they’re assaulting a beach head.

All of the branches frown upon the practice, but in the Marine Corps, it’s a sin.

And it appears the trend of banning hands in pockets has caught on. A Michigan man was detained Thanksgiving Day after someone called the police on him for walking with his hands in his pockets.

He posted the video of the encounter on Facebook and it is going absolutely viral, with more than 85,000 shares and 3 million views. To many, it’s an example of racial profiling by police or the rise of what some have called a “police state.” But to Marines, it’s a funny manifestation of one of the odder and more controversial nuances of Marine Corps culture in mainstream America.

The encounter was brief and uneventful, but rife with tension in light of national unrest surrounding racially charged incidents with police in Ferguson, Missouri, and across the country.

The cop did the right thing and didn’t force him to show identification, didn’t frisk him, was respectful, and merely said, “I’m just checking on you. If you say you’re fine, you’re good.”

But my favorite moment comes when the officer asks, “Is that an inconvenience to talk to me right now?”