The former Seahawks player shares his go-to MRE, favorite war film and what he learned in the Army that helped in football. 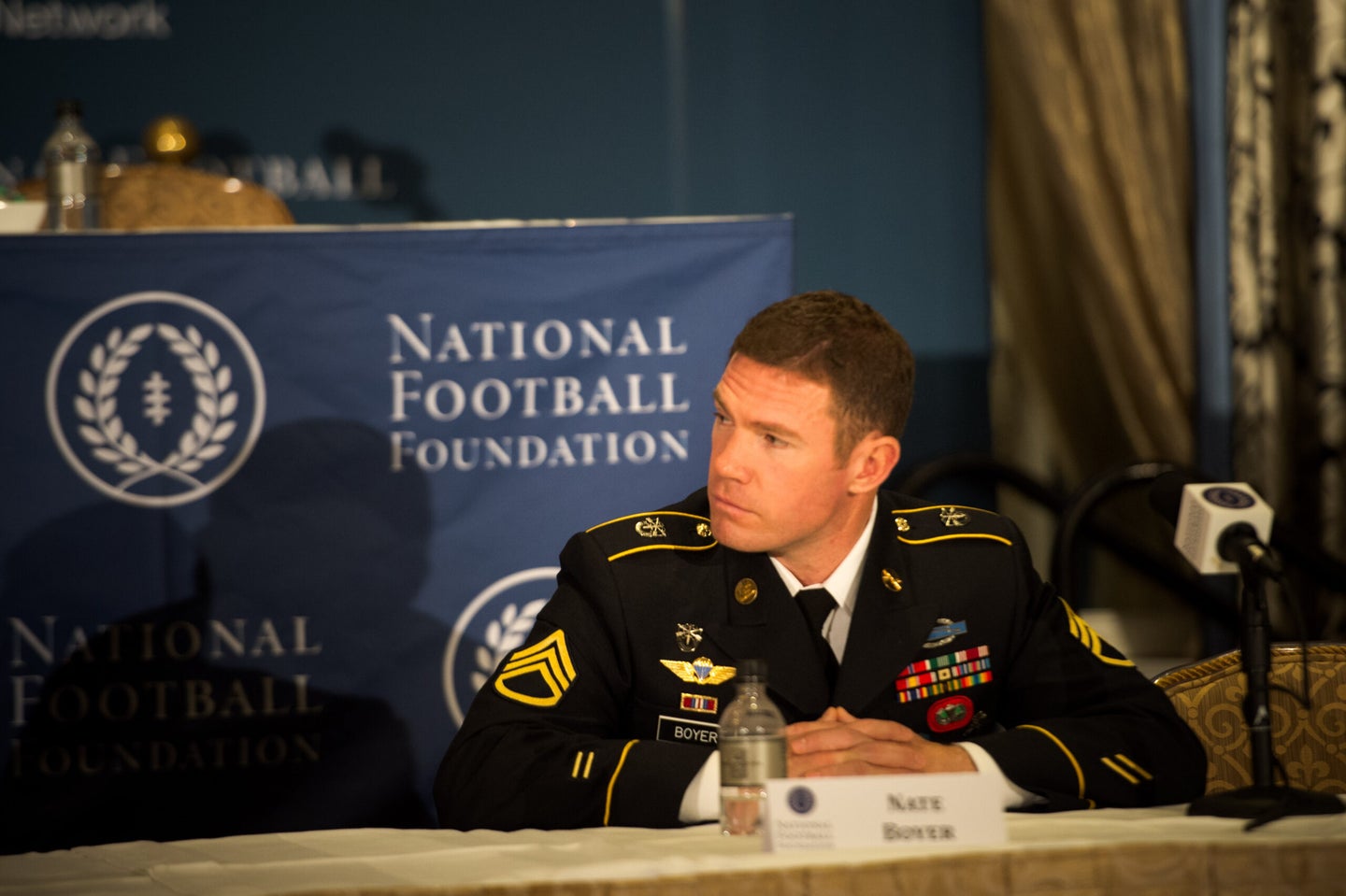 Nate Boyer has had a hell of a career — several in fact. He’s been a Green Beret, a professional football player, philanthropist and veterans advocate, actor and recently he’s added “director” to that list.

After working with refugees in Sudan, he joined the Army in 2005. He ended up part of Special Forces the next year and deployed with Operational Detachment Alpha 0324, 10th Special Forces Group to Iraq in April 2008. That deployment lasted until January 2009 and was followed by another tour, this time to Afghanistan from April to August 2013 with Special Operations Joint Task Force-Afghanistan. From April to August the following year he deployed with ODA 3116 3rd Special Forces Group. Boyer also took part in training missions around the globe, from Israel in 2009 to Bulgaria in 2011 and Greece in 2012.

After leaving active duty in 2009, Boyer joined the National Guard and enrolled at the University of Texas. There he joined the football team as a walk-on with no prior football experience. He ended up a long snapper and won the Armed Forces Merit Award. He ended up going pro, signing with the Seattle Seahawks in 2015 as a free agent.

Since leaving the NFL, Boyer has been involved in philanthropy. His organization, Merging Vets & Players, pairs transitioning veterans with pro football players and athletes, many of them also transitioning to life outside of their careers in uniform.

And now, the 41-year-old is months away from his first directorial debut, MVP, which tells the story of a recently retired NFL player and that of a homeless veteran suffering from PTSD, played by Boyer, as the two try to find their way apart from a career, a community, and a way of life, that came to define them.

Task & Purpose had a chance to talk with Boyer ahead of this year’s Army-Navy football game in Philadelphia, Pennsylvania, and took the opportunity to ask him about the essentials of military life.

Here are 10 questions only a veteran would ask Nate Boyer:

Task & Purpose: What’s your favorite war film and why?

Nate Boyer: Saving Private Ryan. Just the brotherhood, the camaraderie, the banter between the guys beyond all the war stuff I just felt like it’s so genuine.

Go-to MRE is gonna be chicken with noodles especially because you’ve got the jalapeno cheese sauce, plus you’ve also got the peanut butter M&Ms — very crucial.

Well, I’m a Green Beret, so obviously hearts and minds, you know what I mean. I gotta get in with the people or the zombies or whatever and just really understand where they’re coming from and try to win that rapport.

What’s the dumbest thing you ever did as a junior soldier?

I do not want to dispel that information. That one stays with me to the grave, but it was dumb, but there’s a lot of dumb stuff. We’ve all done it, but I’ll leave it there.

Finish this sentence: “You shouldn’t join the military if…”

You shouldn’t join the military if you think you’re gonna be in Delta Force.

If you could go back and talk to yourself at the recruiter’s office, what would you say?

What’s one thing you learned in the Army that you carried with you in your football career?

Aim small, miss small. That’s the number one thing; attention to detail. That was the key. Block out the noise.

In a firefight always remember to keep your finger off the trigger unless you intend to destroy what’s on the other end of that rifle barrel.