Thanks to growing populations and accelerating technological innovation, urban combat is slated to become the future of warfare. West Point... 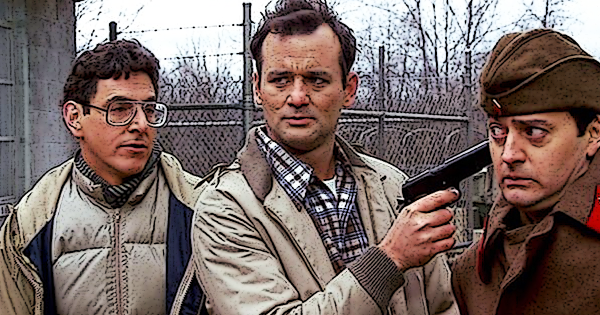 Thanks to growing populations and accelerating technological innovation, urban combat is slated to become the future of warfare. West Point knows it. National Defense University knows it.Even DARPA knows it.

But if there's one institution that can shape how the Pentagon approaches urban warfare, it's Stripes. Bill Murray's Cold War exploits in eastern Europe in the classic comedy accidentally provided a wise-cracking case study on maneuvering in hostile urban environments.

The key to surmounting the challenges of urban conflict arguably revolves around the seamless meld between man and machine, in a sense. Warfighters need to maintain constant situational awareness; for example, infrared sensors allow warfighters to detect threats like hidden weapons emplacementsand fighters in ambush positions. In contrast to the open ranges of, say, Afghanistan, potential tragedy lurks behind every corner.

But, like any other combat situation, better tech is worthless on its own: good leadership utilizes these advantages to save lives and accomplish objectives. In Stripes, Murray's John Winger effectively combined the prowess of the EM-50 urban assault vehicle with his innate leadership potential, honed through trials of military training, to successfully recover isolated personnel from a large military base.

This young private was a army of one before the Army had more capable special operations.

Ironically, Winger's training for this kind of special operation began before he even set foot at Fort Arnold. He uses his expert knowledge of New York City to cause a massive traffic shutdown by expertly placing his taxi as a impromptu road block. His Army recruiter must have seen the talent potential of a streetwise wunderkind that just reeked of special operations. He even managed to convince his technically competent and military-skeptical friend, Russell Ziskey, to follow him into the U.S. Army.

Like any good leader, Winger's charisma allowed him to use other's skills to make up for his own shortcomings and knowledge gaps. During the daring rescue mission into Czechoslovakia, the Wisconsin of eastern Europe, he minimized collateral damage, suppressed enemy efforts to surround and destroy his unit of irregulars, and escaped with all U.S. prisoners of war.

Given that Joint Special Operations Command has increased operations tempo and lethality by leaps and bounds since 1981, Bill Murray may have been the Wild Bill Donovan of urban special operations. And although he did not reenlist, it's entirely possible that he ended up in some sort of Operation Treadstone scenario: after all, there was a Bill Murray in the CIA around the same time period.