Deadpool Was The Worst Army Special Forces Soldier Ever 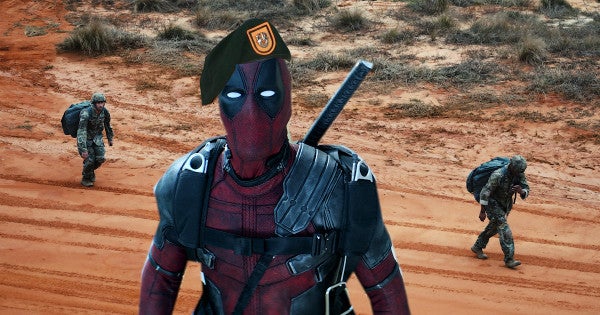 Despite searching far and wide for his DD-214, we are left to speculate from two officialDeadpool movies and one terrible X-Men spinoff, as to the U.S. military veteran origins of our favorite 'merc with a mouth'.

What we do know is that he was deployed to Iraq and Somalia, and he trained in Jacksonville; it's possible that there was a black ops operation near the infamous TGI Fridays in Jacksonville, Florida, but it's far, far more likely that it was related to the killer training that took place in Tampa earlier this year.

Regardless of his TGI Fridays experience, Wade Wilson shows the tactical moves that say 'I used to do really wild things with C-4 at Fort Bragg', but his post-service life was not indicative of a gun-slinging spook. Most high-end operators can, at the worst, nail a gig making coffee humor videos if the CIA clandestine operations directorate side hustle falls through.

In 2016, Wade Wilson saw that the future if hairstyles was the barracks special.

But Wade had a dishonorable discharge. Not even a B.A. in communications from directional 'U' was in the cards for our favorite enlisted veteran of the Marvel universe. Minus good papers, which likely cost him his clearance, Wilson was left to intimidate teenage stalkers and pull pranks on overweight bar-patrons.

We don't know what Special Forces group he was with, his specialty, or why he was drummed out. What we do know is that his battle buddies still remembered him on first sight, and he sure knew how to sport a military haircut before it was fashionable.

Deadpool runs into a friend who also did something spec-ops-y in Jacksonville.Marvel

Despite all of the antics and obfuscation, it's intensely relatable to see a veteran who was kind of a shitbag — albeit a capable one — hit a rough patch after getting out of the military. And luckily for us all, Deadpool met a nice man named Francis to guide him through his post-service transition.