Mattis Reportedly Has The Dumbest New Nickname I’ve Ever Heard

It's generally well known that Secretary of Defense James Mattis hates the “Mad Dog” nickname that U.S. Marines affectionately bestowed upon him during... 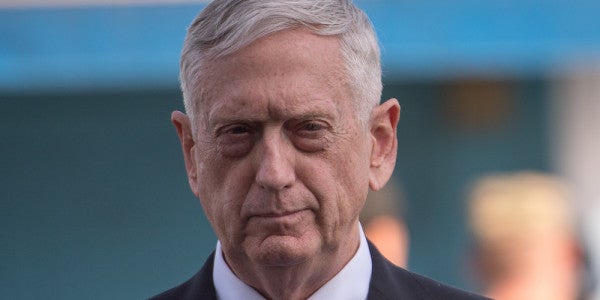 It's generally well known that Secretary of Defense James Mattis hates the “Mad Dog” nickname that U.S. Marines affectionately bestowed upon him during the Iraq War, but apparently that didn't stop his boss from giving him an even crappier new moniker: “Moderate Dog.”

“What the fuck?” you might ask, spitting your Natty Light all over your laptop. What the fuck, indeed. Here's the scoop, courtesy of DC gossip rag Politico (emphasis ours):

The problem for the White House extends beyond filling the top job at the Justice Department. Trump has for months been mulling the prospect of replacing Defense Secretary Jim Mattis, who is now expected to be dismissed or to resign after the midterm elections, too. Once enamored of the retired Marine general and his nickname, “Mad Dog,” the president bragged to donors, “The guy never loses a battle, never loses.” But Trump has slowly come to realize that Mattis’ political views are more moderate than his sobriquet suggests, and the president has taken to referring to him behind closed doors as “Moderate Dog.”

It goes without saying that Moderate Dog is just about the worst nickname in human history. I mean, for fuck's sake, James Mattis isn't Andy Bernard:

Mark my words: The next person to call Mattis “Moderate Dog” gets a one-way trip to Afghanistan.