The new Jack Ryan reboot that premiered on Amazon at the end of August marked the return of Tom Clancy’s... 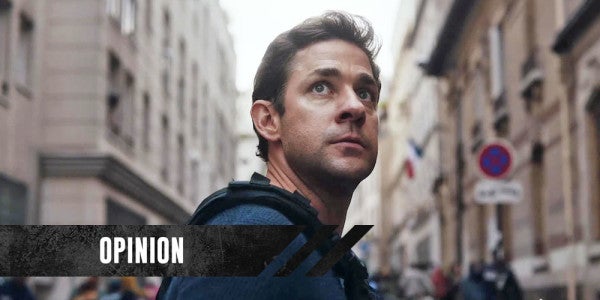 The new Jack Ryan reboot that premiered on Amazon at the end of August marked the return of Tom Clancy’s eponymous Marine vet turned CIA super-spook to the forefront of American pop culture. Updated to reflect changing international threats, the series’ generally positive reception illustrates the staying power of Clancy’s vision of the military and national security realm. The New York Times’ Michael Hale observed that Jack Ryan is “still the Boy Scout, which is to say the godlike, morally superior American, stretching out his hand to the rest of the world.”

But while younger viewers may not be familiar with Jack Ryan, they are likely very familiar with Clancy’s enduring perspective on international relations through the ubiquitous and growing universe of video games. Ryan and the Clancy universe writ large both play a part in inflating perceptions of the role of the military and its capabilities that can be detrimental in the long run.

Tom Clancy games like the Rainbow Six series, Wildlands, Ghost Recon and The Division, as with most video games of their ilk, attempt to immerse the player in the adrenaline-thrilled drama of conflict and espionage. Much like his novels, the video games obsess over equipment and strive to provide a high level of authenticity, if not realism, to their audiences. War is portrayed as a highly technical and operational exercise within which a player wins the battle by properly applying the various gadgets available to kill the enemy in a clearly delineated battlespace.

For many civilian players, these video games may be the deepest interaction they have with the military and current wars; at its peak, there were approximately 100,000 soldiers in Afghanistan, while on a single day this year tens of millions of Call of Duty players were engaged in virtual combat. But for those who experience war through video games, repeated engagement with mischaracterizations are likely to internalize the incorrect perceptions that are rarely challenged by society and other media representations of the military, an experience that can have adverse effects on our public discourse surrounding potential military actions Certainly, as Chris Suellentrop pointed out in the New York Times back in 2010, “All war fiction…reduces combat to something less than what it is in reality,” but video games are unique in their interactive component and are often underappreciated in media analysis.

It may seem like a stretch that video games could impact or shape the worldview of those who play them, but a growing body of psychological studies have revealed that humans frequently rely on fiction to inform their worldviews especially when the fiction is presented as “realistic.” This research shows that watching 24, The West Wing, or Jurassic Park all strongly influence viewers’ perceptions of torture, military intervention, and velociraptors. Similarly, the public perception of the legal system is shaped by shows like Law & Order; police and legal shows create a false reality where the players in the legal system are more virtuous than in the real world and where truth and justice (mostly) prevail. Just as most Americans do not serve in the military, a large number never experience litigation, and rely on media to inform them on how the system works. A J. Furman Daniel and Paul Musgrave point out, popular culture “can matter for audiences mass and elite because its mixing of fact and fiction makes it more powerful at disseminating ideas, images, and ‘knowledge’ about the world than standard, respectable sources.”

At its peak, there were approximately 100,000 soldiers in Afghanistan, while on a single day this year tens of millions of Call of Duty players were engaged in virtual combat

Unsurprisingly, fiction often proves a convenient way to convey ideas about policy. Clancy’s own novels were cited in Congress during the 1980s as evidence for anti-satellite weaponry and a strong merchant marine; more recently, Ghost Fleet, a popular novel by defense wonks Peter Singer and August Cole, successfully conveyed the authors’ concerns about current technological trends by using the backdrop of a fictional war between the U.S. and China that otherwise would have been overlooked in a policy white paper. Although Ghost Fleet successfully drew DC policy-makers’ attention to electronic supply chains, fiction, on the whole, has inflated and exaggerated understandings of military capabilities.

Anecdotal examples illustrate that even White House officials grossly overestimate the ability of the military to undertake missions, with no planning, at the drop of a hat. Given that most Americans are increasingly distanced from the military and national security realm — 71 percent of Americans agree the public has little to no understanding of the military — it can be easy to allow claims presented in fiction as factual and shape the way in which we interpret the world, especially through mediums as immersive and visceral as video games.

Previous attention to how video games influence public perception has largely been focused on their use as recruiting tools that inculcate positive ideas about the military. However, one does not need to look to military-sponsored games to find stories of American protagonists that are hyper-competent, stoic, and daring. The depiction of the military as a uniquely competent organization comprised of superhumans, with a few notable exceptions, is consistent across video games. So is the depiction of war as something won through progressive tactical victories that lead to the enemy’s capitulation and ultimately peace. Today’s video games rarely convey the idea that the enemy gets a vote in how a war will progress or when it will end, or that American wars today are irregular, featuring imperfectly demarcated enemies. Nuance rarely goes beyond portrayals of war as hyper-violent and bad, and there are few crises or situations that cannot simply be solved through the proper application of violence.

Related: How The Media’s Narrow Portrayal Of Service Members Does The Military A Disservice »

Granted, to be entertaining, a video game about modern war is not going to feature countless sit-downs with village elders, building civil governance or the “hurry up and wait” reality of military bureaucracy. Video game depictions of war have been likened to the porn version of a love story: overemphasizing action and lacking realism. Furthermore to appeal to a mass American market that lacks what longtime Atlantic correspondent James Fallows describes as, “…the comfortable closeness with the military that would allow them to question its competence as they would any other institution’s”, video game companies have little incentive to release games with nuanced depictions that go outside expected narratives of military service and service members. Video games are made the way they are for a reason.

While the civil-military divide exists for reasons far more complicated than the game mechanics of Call Of Duty, the current presentation of service members in video games conforms to the existing tropes of a patriotic action hero or broken victims suffering from PTSD. Along with movies and television, the portrayal of war in video games exacerbates the public’s misunderstandings and lack of familiarity with the military and presents an image of service that does not represent the broad range of experiences of military members.

In an era where the country seems to be weighing the possibility of military action in Venezuela, Iran, and North Korea, it is worth considering whether video games have contributed to a media landscape where citizens, often removed from the human impact of war, are weighing their support for such conflicts based on flawed assumptions about what military force can achieve and what the costs will be. Furthermore, what military does the public believe it is sending to fight these wars — the one constructed in familiar media narratives, or the real one comprised of real people who bleed and die?

James Fahy is a member of the US Army Reserve with a Master’s in War Studies from King’s College London. Emma Moore is a researcher with the Center for a New American Security (CNAS)