More than a century after thousands of Marine Corps recruits, drill instructors, and officers formed up to create a "living Eagle, Globe and Anchor," at Parris Island, South Carolina, another generation has done the same. 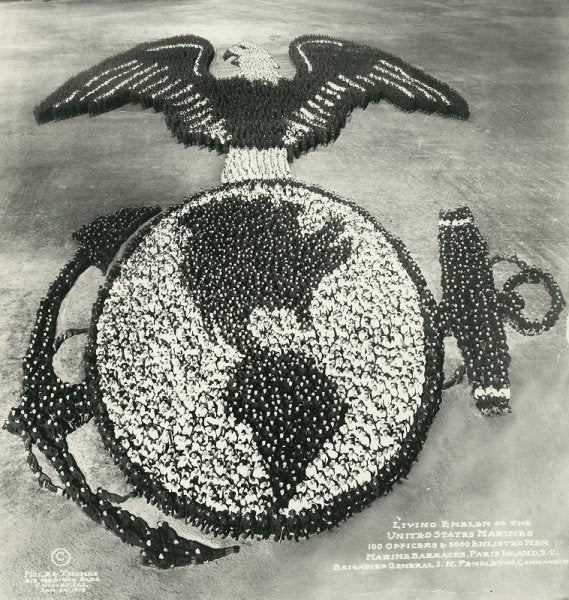 Editor's note: An earlier version of this story was originally published on Feb. 7, 2019.

More than a century after thousands of Marine Corps recruits, drill instructors, and officers formed up to create a “living Eagle, Globe and Anchor,” at Parris Island, South Carolina, another generation has done the same.

But they didn't seem too happy about it.

How many recruits does it take to make an EGA?

Today, @MCRDPI celebrated their centennial by recreating the “Living Eagle, Globe and Anchor” they made 100 years ago. pic.twitter.com/2fhlZf7RSE

Posted to the Marine Corps' official Twitter account on Feb. 6, 2019, the photos were meant to commemorate Parris Island's centennial anniversary by recreating a photo taken in 1919 when 9,100 Marines formed up on the parade deck to create a genuinely badass “living EGA.”

Yet the recreation, while Eagle-Globe-and-Anchor-shaped, was different in one key way: The Marine recruits involved in the recent photo looked fucking miserable, that or mildly amused, fast asleep, and/or really goddamn bored.

Now, just compare that sampler platter of facial expressions to the original, in which Marines lounge about, almost lackadaisically, with a minimum of screaming, and not a single rage-filled drill instructor threatening recruits with endless hours of burpees if they don't “shut their nasty faces.”

My favorite part about this 1919 "Living Eagle, Globe, and Anchor" from Parris Island is the recruit who's clearly taking a nap. pic.twitter.com/EtFCGXAxjP