To close out an unusually busy year of attempted security breaches at military installations in the continental United States, Nellis... 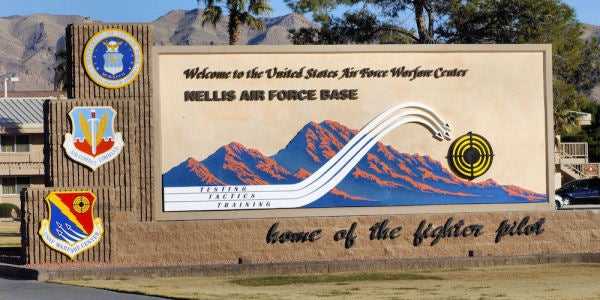 To close out an unusually busy year of attempted security breaches at military installations in the continental United States, Nellis Air Force experienced what a leaked operational report characterized as an alleged abduction and sexual assault involving a civilian vehicle that reportedly breezed through the base's main gate earlier this week.

The operational report, obtained and published on the influential Air Force amn/nco/snco Facebook page, details an early morning security breach on Tuesday in which a white Mercedes Benz entered the base without being stopped by security forces.

Shortly afterward, the Nellis base defense operations center allegedly “received a phone call from on-base personnel who stated that a female civilian approached them and said she was kidnapped and assaulted by a male civilian” inside of a vehicle that matched the description of the Benz.

That, according to the operational report, is where things got out of control (emphasis ours):

Due to both being civilians, local PD took over the case with support from OSI. During interviews conducted by local PD, the victim recanted her statement and refused to press charges. Local PD then turned the case back over to SF who gained authorization to search the vehicle. After negative findings, SF removed the vehicle from the installation. Local PD took the suspect into custody for an active warrant and the alleged victim was released on her own recognizance due to there no longer being sufficient evidence of kidnapping or sexual assault.

This report was delayed for multiple reasons, initially the alleged victim reported a second assailant which SF personnel searched for resulting in a person matching the description being detained. During the interview of that suspect, the alleged victim recanted her statement that a second assailant was involved. Further, video tape of the main gate guard shack was reviewed to determine how the personnel gained access. Lastly, a thorough search of the vehicle was performed.

In a statement to Task & Purpose, Nellis Air Force Base spokesman Rebekah Mattes confirmed that the breach occurred on Tuesday, stating that Nellis BDOC personnel sprang into action after receiving a call from two airmen “reporting they were approached by an individual who claimed to have been kidnapped and sexually assaulted.”

“[The] 99th Security Forces Squadron Defenders immediately responded to the victim, who provided a description of her alleged assailant’s vehicle,” Mattes told Task & Purpose, confirming that security forces personnel quickly discovered the vehicle and suspect within the base.

“Further investigation showed neither individual was authorized to be on Nellis Air Force Base at which point Las Vegas Metro Police Department was called in,” she added. “Both individuals were turned over to for questioning and investigation into the allegations.”

The Las Vegas Metropolitan Police Department did not immediately respond to requests for comment from Task & Purpose.

Questions still remain regarding details of the breach. The leaked operational report claims that security forces personnel “failed to stop the vehicle or initiate gate runner procedures,” after which the posted sentry “proceeded back into his post and did not inform the other two sentries who were posted with him.”

Mattes confirmed that security forces stationed at the main gate at the time have been placed on administrative duties pending the outcome of an investigation into the incident.

But despite a separate claim from an unnamed witness, posted on Wednesday to the Air Force amn/nco/snco Facebook page, that the alleged victim “ran to a group of maintainers along the flight line” to report the assault, Mattes asserted that the flight line was never breached and ” no point were aircraft, classified information, or personnel threatened.”

“The 99th Air Base Wing takes installation security very seriously and is looking into the matter and examining what processes may need to change to further bolster security,” Mattes said in a statement. “The investigation into how the individuals gained access to Nellis is ongoing and more information is not available at this time.”

On the upside, at least nobody burst into flames this time.

SEE ALSO: What’s With All These People Suddenly Trying To Breach Security At U.S. Military Bases?