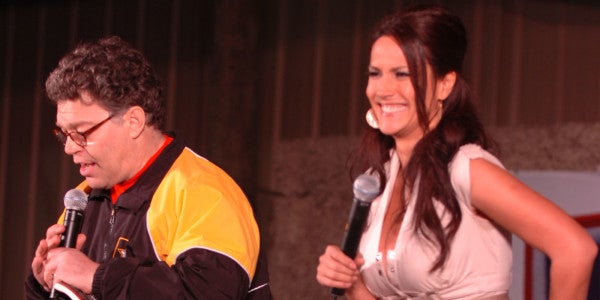 Sen. Al Franken — the wry former Saturday Night Live comic who’s become a progressive darling as a Democratic senator from Minnesota — was publicly accused Nov. 16 of making unwanted sexual advances on a fellow performer while the two were on a winter 2006 USO tour “in the middle of a war zone” sponsored by the sergeant major of the Army.

The incident occurred on a stop of the USO Sergeant Major of the Army Hope and Freedom Live Show, which visited Kuwait and Afghanistan. Franken, a veteran of numerous USO shows since 1999, had billed the tour as being “in the tradition of Bob Hope.” He’d added: “Leeann Tweeden and I will host this event and it will include some mild political satire.”

Tweeden, a radio commentator and model — pictured below with Franken on that tour in Kuwait — wrote in a post this morning for L.A.-based KTLA-790 AM that Franken cornered her backstage and pressured her into an embrace and a kiss on a flimsy pretext — that his script called for it:

He continued to insist, and I was beginning to get uncomfortable.

He repeated that actors really need to rehearse everything and that we must practice the kiss. I said ‘OK’ so he would stop badgering me. We did the line leading up to the kiss and then he came at me, put his hand on the back of my head, mashed his lips against mine and aggressively stuck his tongue in my mouth.

I immediately pushed him away with both of my hands against his chest and told him if he ever did that to me again I wouldn’t be so nice about it the next time.

I walked away. All I could think about was getting to a bathroom as fast as possible to rinse the taste of him out of my mouth.

I felt disgusted and violated.

Not long after, I performed the skit as written, carefully turning my head so he couldn’t kiss me on the lips.

Tweeden added that no one had witnessed Franken’s violation, and she hesitated to tell anyone about it. “I didn’t tell the Sergeant Major of the Army, who was the sponsor of the tour,” she wrote. “I didn’t tell our USO rep what happened. At the time I didn’t want to cause trouble.” In a statement to Task & Purpose, USO spokeswoman Ashley McLellan confirmed that that the group had never heard the allegation before Thursday, but added: “The report is deeply disturbing and does not reflect the values of the USO.”

Franken, however, topped that off by groping Tweeden, “without my consent, while I was asleep” — which she only learned about when seeing this photograph of him doing it after the fact:

In a statement Thursday morning, Franken apologized for his behavior. “I certainly don’t remember the rehearsal for the skit in the same way, but I send my sincerest apologies to Leeann,” he said. “As to the photo, it was clearly intended to be funny but wasn’t. I shouldn’t have done it.”

Al Franken and Leann Tweeden entertain the Soldiers with a skit at Forward Operating Base Marez in Mosul, Iraq Dec 16. They were hosts of the United Service Organization's Christmas tour of bases in the Central Command area, partnering with Sgt. Maj. of the Army Kenneth O. Preston.Spc. Creighton Holub/U.S. Army

Since the outing last summer of Hollywood movie moguls Harvey Weinstein and James Toback as a serial sexual abusers and assaulters of hundreds of women, America’s cultural dam has burst forth with harrowing stories of women victimized and cowed into silence by men in positions of power.

In the wake of the Weinstein accusations, Franken had been one of the leading voices in the Senate condemning powerful men's sexual misconduct:

Al Franken, last month: "As we hear more and more about Mr. Weinstein, it’s important to remember that while his behavior was appalling, it’s far too common." https://t.co/ZPSH7onstA

The latest such man had been Roy Moore, the outspoken evangelical former judge who’s running as a Republican for Alabama’s open Senate seat — and who now stands accused by seven different women of stalking girls between 14 and 18 at malls and high schools for dates when he was a prosecutor in his thirties.

Last month, Franken took to Facebook to talk about how to foster a safer culture for women. “I’ve realized that the disappointing responses women often face when they go public both embolden harassers and encourage victims to stay silent,” he wrote.

He added: “We must do something to address this all-too-common problem.”

Task & Purpose has reached out to Sen. Franken’s office and the USO for comment; we will update this story as new information comes to us.