Two weeks to the day since Democratic Sen. Al Franken of Minnesota was accused by a fellow entertainer of sexually... 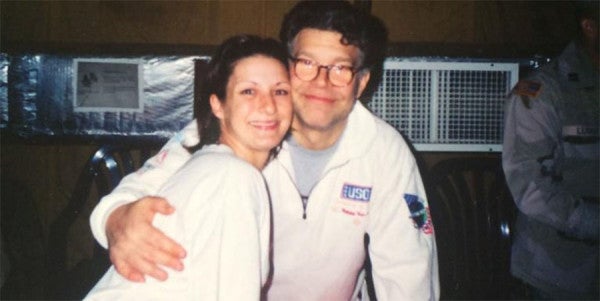 Two weeks to the day since Democratic Sen. Al Franken of Minnesota was accused by a fellow entertainer of sexually harassing her on a 2006 overseas USO tour, another woman — a former soldier — says she, too, was groped by Franken on a different USO tour.

Stephanie Kemplin, 41, a former military policewoman, told CNN that Franken used a photo opportunity as a chance to cup her breast for “five to 10 seconds” on a USO tour in Kuwait in December 2003. She is the fifth woman to accuse the former comedian and liberal senator of inappropriate contact this month.

“When he put his arm around me, he groped my right breast. He kept his hand all the way over on my breast,” Kemplin, pictured above with Franken, told CNN. “I've never had a man put their arm around me and then cup my breast. So he was holding my breast on the side.”

She was so shocked, she says, that she never challenged the senator. “It was long enough that he should have known if it was an accident,” she said. “I'm very confident saying that.”

Kemplin told the news network that reliving Franken’s surliness in recent weeks had triggered traumatic memories of a sexual assault she suffered at the hands of a fellow soldier in Kuwait, also in 2003. She reported the soldier to her chain of command, and what happened next is pretty nuts, according to CNN:

Kemplin was eventually told that while the whole incident was “totally inappropriate behavior,” the accused specialist was not guilty of “indecent assault.” In addition, she was told that she was “responsible” for having allowed the male specialist to get close to her.

Asked about Kemplin’s allegation against Franken, a representative of the senator told CNN: “As Sen. Franken made clear this week, he takes thousands of photos and has met tens of thousands of people and he has never intentionally engaged in this kind of conduct.”

Multiple friends and relatives of Kemplin corroborated her account of the encounter with Franken, which she had told them about shortly after the fact. It is also consistent with the broad strokes of other women’s allegations against the senator. CNN also noted that Kemplin is a registered Republican who said she’d voted for Donald Trump for president.

Kemplin, for her part, told CNN she expects not to be believed by some people, because it took 14 years for her to talk about what happened to her. “Nobody wants to believe anybody if you don't immediately stand up and say something,” she said.