The Real Cost Of Having Commanders In Charge Of Military Justice

Last week, the Senate failed to pass the Military Justice Improvement Act by a vote of 50-94. For the second... 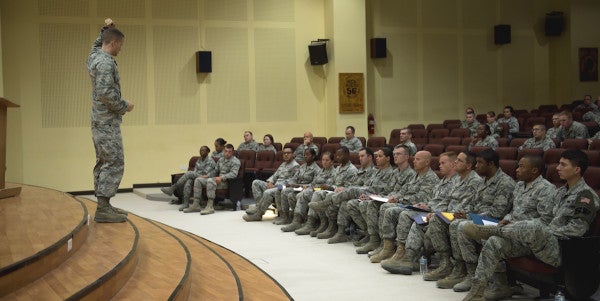 Last week, the Senate failed to pass the Military Justice Improvement Act by a vote of 50-94. For the second year in a row, the act fell short of the 60 votes needed to overcome a filibuster in the Senate.

MJIA, which has been championed by Sen. Kirsten Gillibrand of New York, would remove military commanders from the act would move the decision “to prosecute any crime punishable by one year or more in confinement to independent, trained, professional military prosecutors,” including sexual assault.

There has been much discussion about the number of military sexual-assaults cases going to trial and if that number would would be higher or lower under MJIA, which overly simplifies its intent. Its purpose — to professionalize the handling of sexual assaults by the military — can’t always be measured by simple numbers. As Don Christensen, a retired Air Force judge, accurately summarized recently, “It is time to ensure all military members, whether victim or accused, have access to a fair and impartial justice system equal to that of the American citizens they protect.”

There is a cost for having commanders, who have no expertise in military justice, make important decisions about sexual-assault cases. This past week, that cost was realized when the U.S. Court of Appeals for the Armed Forces, or CAAF, overturned an aggravated sexual assault conviction.

The CAAF reviewed the conviction to determine “hether the military judge erred by denying a challenge for cause against the court-martial president, who said the ‘guilty until proven innocent’ standard is ‘essential’ to the military’s mission.”

Ultimately, CAAF ruled that the assignment of panel member Navy Capt. Martha Villalobos to the trial by the commander resulted in “bias, and that error prejudiced Appellant’s substantial rights.”

Under Article 25(b)(2) of the Uniform Code of Military Justice, a commander is required to select members who are, in the opinion of the commander, “best qualified for the duty by reason of age, education, training, experience, length of service, and judicial temperament.” In the military, a member is the equivalent of a juror in civilian practice. Thus, the commander is required to select the best-qualified jurors for the trial.

Before the trial, Villalobos completed a questionnaire about her background and experience in the military. This is a common practice, and the questionnaires are provided to the commander to aid him or her in selecting the best-qualified jurors.

One of the questions on the questionnaire was, “What is your opinion of the military justice system?” Villalobos responded,

There is not perfect system, and I understand why the enforcement of ‘you are guilty until proven innocent’ (just the opposite as in the civilian sector) is essential because the military needs to be held to a higher standard just for reasons of our mission. It is a voluntary force and you come into the service knowing that you will be held to this higher standard and give up your civil rights.

Despite these clearly objectionable answers, the commander, Adm. Fernandez L. Ponds, selected Villalobos as a juror. Ponds, after reviewing the questionnaire of Villalobos, believed she was best qualified because of her education and judicial temperament. As the CAAF explained, “In the military justice system, panel members are chosen by the same individual — the convening authority — who decides whether to bring criminal charges forward to trial.”

During the trial, the defense objected to Villalobos sitting as a juror. The trial judge questioned Villalobos and stated, “I am going to focus here for a minute on her answers to the member’s questionnaire . . . It’s absolutely the case that she did arrive at this court-martial under a misapprehension of what the burden of proof is at a court-martial.” But after considering her answers at trial, the judge ruled that Villalobos “is capable of sitting fairly as a member in this case.”

The CAAF, however, characterized the answers by Villalobos “as confusing rather than clarifying her views,” and further determined that “a reasonable member of the public might well question the fairness of including CAPT Villalobos on the panel.”

This overturned conviction would never have happened if MJIA had passed because an experienced lawyer would not have assigned Villalobos as a juror. MJIA calls for the elimination of commanders convening courts-martial and replaces them with Offices of Chiefs of Staff on Courts-Martial, staffed by experienced lawyers in the rank of O-6 or higher, who would assign jurors for trial.

In the Woods case, the CAAF explained, “the notion that criminal defendants are innocent until proven guilty is at the core of our judicial system.” Villalobos was similarly incorrect when she stated that service members give up their civil rights. Nonetheless, Ponds selected her as a juror anyway. This is problematic and demonstrates a failure in the military justice system for a number of reasons.

First, Villalobos’s comments on the military justice system demonstrate a clear misunderstanding about the burden of proof. Her view about service members giving up their civil rights is unquestionably incorrect and an experienced lawyer would have know that this recorded viewpoint could result in the case being overturned. However, Ponds, who had Villalobos’s questionnaire on hand for more than two months before selecting her as a juror, did not have the experience to take this into consideration.

The selection of Villalobos calls into question the criteria Ponds was using to select the best-qualified jurors. It is difficult to reconcile Villalobos being selected as a juror who is “best qualified” when she expressed views about the burden of proof at a court-martial that were so clearly incorrect.

It is rather shocking that such a senior Navy officer would harbor such incorrect views about basic principles of justice, as those voiced by Villalobos. It is not as though she was some junior officer uneducated in military matters. Villalobos explained that she reached her conclusion about a higher standard for military members — “you are guilty until proven innocent” — after discussing the matter with her husband, a member of Army Special Forces. While this higher standard of conduct is a commendable goal for service members to strive for, it has no place in a court of law.

Further, as a Navy captain, it would be common for Villalobos to serve as a commander. Thus, under the current system, she could be responsible for determining if a sexual-assault case goes to trial, yet she lacks the basic knowledge of military justice necessary to make an informed decision. If commanders are to be the final arbiters on whether sexual-assault cases proceed to trial, they must possess a more-detailed knowledge of legal standards.

Some will attempt to characterize this critique as a general attack on the competence of these naval officers, but this is nothing but a red herring detracting from the central arguments in favor of MJIA.

I am not suggesting Ponds is anything but a highly qualified surface warfare officer or that Villalobos is not a proficient dentist. Rather, I mean to emphasize that these naval officers are not trained experts in the area of military justice. As the CAAF judge explained, Villalobos’s “mistaken belief as to the burden of proof in criminal law … could impact the public’s perception of fairness.” Accordingly, if Ponds possessed the required level of expertise in military law, he would have never assigned Villalobos as a juror.

MJIA would take these important decisions out of the hands of untrained commanders and place the decision to prosecute serious crimes, and other details such as selecting jurors, in the hands of independent, trained, professional military prosecutors.

MJIA will only professionalize military justice and avoid the type of elementary mistakes that occurred in the Woods case, which resulted in the highest military court overturning a conviction in an aggravated sexual assault. Members of the military deserve an impartial and professional system of justice.