2 Vets Share Why They Love Working At Schneider Electric

Editor’s Note: The following story highlights a job opportunity at Schneider Electric. Committed to filling its ranks with talented members... 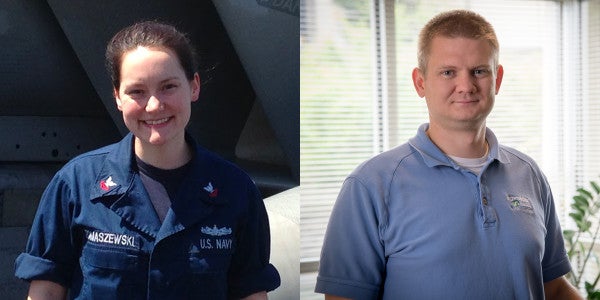 Editor’s Note: The following story highlights a job opportunity at Schneider Electric. Committed to filling its ranks with talented members of the military community, Schneider Electric is a Hirepurpose client. Learn more here.

When veterans are preparing to shift to the civilian sector, they are often told to present their specific skillsets in a way hiring managers can appreciate. Schneider Electric — a global leader in sustainable energy management and industrial automation — provides a work environment built on the same foundational principles that make service members succeed at completing their mission. Two veterans shared with Hirepurpose how Schneider’s company culture offers an outlet to succeed using the expertise learned through military service.

Navy veteran Shannon Tomaszewski served as a naval nuclear electrician for seven years, which included several overseas deployments. She says the military afforded her the opportunity to travel the world and experience the camaraderie that emerges from the unique nature of ship life.

“While deployments were certainly challenging, being away from family is always hard, they allowed the crew to bond in the best and most solid of ways. Those shared experiences forged the relationships that will last the rest of my life,” Shannon said.

After transitioning from the military, Tomaszewskireached out to a recruiter on LinkedIn to assist her in evaluating career options. Within weeks, she had an interview with Schneider Electric, then met with the district service manager. She was offered a position as a field service technician. Instantly, she knew the company had a military-supportive culture.

“Throughout New Hire training and even just the first few days on the job, it became evident that Schneider Electric preferred to hire from the military. Even with varied backgrounds between technicians, the base knowledge and training provided the best starting foundation for the job,” Tomaszewski said. “Since there are so many of us that are prior military, the style and habits in the way we work made a good transition to learning the new policies as well as blending it with the practices we had already learned.”

Tomaszewski has worked with Schneider for over a year troubleshooting machines and interacting with customers, contractors, and companies. She explains that many intersections exist between the work ethic of the military and Schneider.

“The Navy taught me that ‘I don't know’ is never an acceptable answer. ‘Let me find out’ is much better. Hard work, elbow grease, the drive to finish a project correctly and on-time and the ability to communicate with a very wide array of people are all traits I was used to people expecting from me,” she said.

Today, Tomaszewski attends the University of New Hampshire pursuing a degree in electrical engineering. She says the company’s grassroots support of employees provides an environment for future advancement.

Brandon Blair, a project manager in Schneider Electric’s power monitoring and controls division, continued to learn different specialties during his 12 years in the military. The Air Force veteran managed groups and projects and says joining the team at Schneider was similar to the components of a permanent change of station (PCS) move.

“I knew nothing of energy management, but knew that it would be like every other job I had to learn: new specialty but same project management principles,” he said.

Blair’s role at Schneider Electric involves leading cross-functional teams at data centers, hospitals, government facilities, universities, and manufacturing plants across North America and overseas. Like Tomaszewski, Blair says the learned work ethic of military service taught him to work until the job gets done and the mission is completed.

“I like knowing that my work is meaningful in adding value to both Schneider and our customers,” he said. “I’m able to influence and control my projects in order to make a difference and have a direct impact on its success.”

Visit Hirepurpose to learn about career opportunities with Schneider Electric or sign up to join their Military Community below for updates and job alerts.

Sign up now to receive updates about the Schneider Electric Military Community and job opportunities.