Allow this colonel to be blunt. 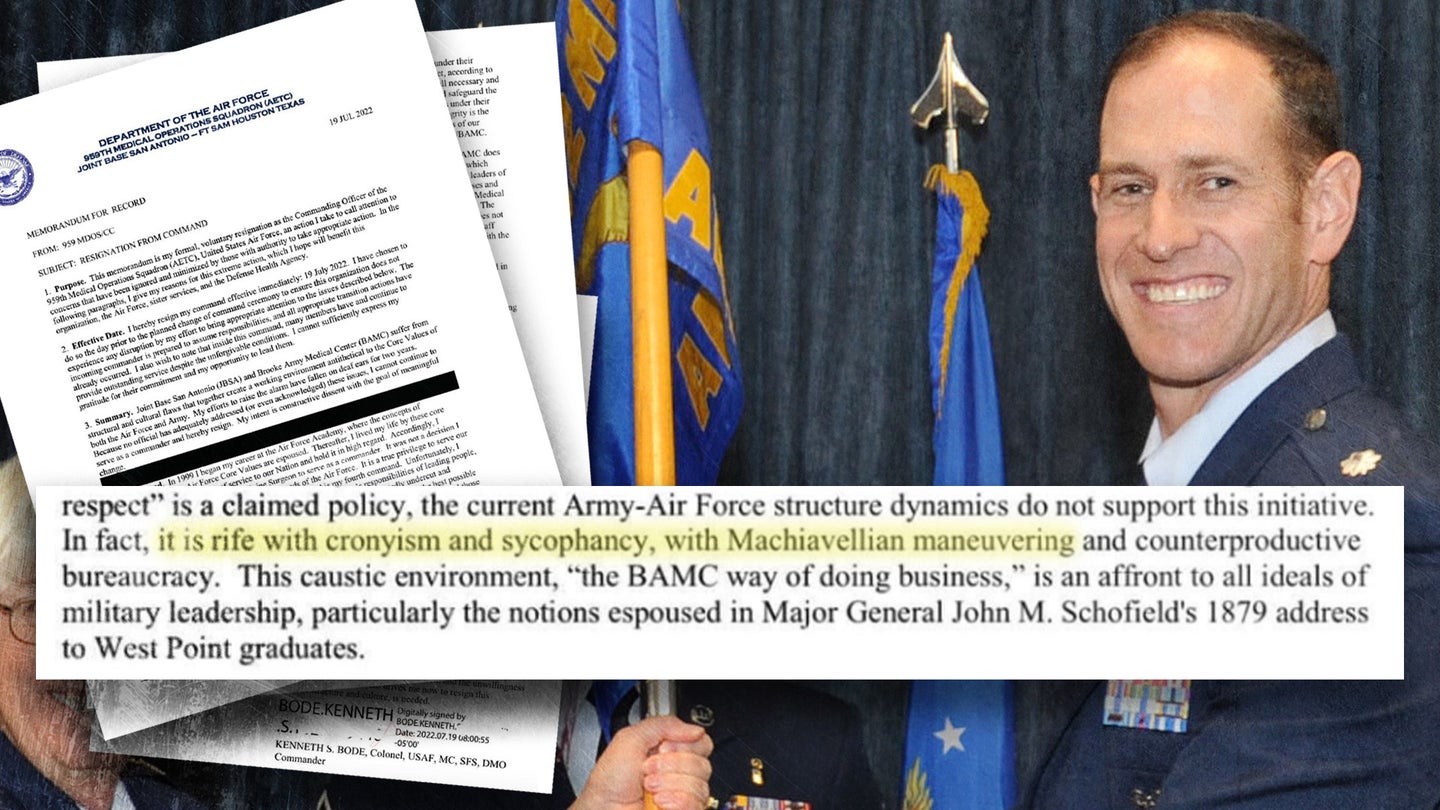 Air Force Col. Kenneth Bode was, until very recently, the commander of the 959th Medical Operations Squadron, which falls under the 59th Medical Wing, based out of the San Antonio Military Medical Center at Joint-Base San Antonio-Fort Sam Houston, Texas. On July 19, 2022, though, Bode resigned his command a day before his scheduled departure, and spared no one in a memo detailing what he called a command that is “rife with cronyism and sycophancy.”

“Joint Base San Antonio (JBSA) and Brooke Army Medical Center (BAMC) suffer from structural and cultural flaws that together create a working environment antithetical to the Core Values of both the Air Force and the Army,” reads Bode’s resignation letter, which the 59th Medical Wing confirmed was authentic. “My efforts to raise the alarm have fallen on deaf ears for two years. Because no official has adequately addressed (or even acknowledged) these issues, I cannot continue to serve as a commander and hereby resign.”

At least according to Bode’s memo, the problems within this command are nothing new.

“Following my formal complaints to the 59th MDW/CC about widespread harassment, defamation, inappropriate behavior, and toxic leadership, a commander-directed investigation (CDI) was conducted that examined interference with command authority, failure to maintain a healthy command climate, abuse of authority, and disrespectful/libel comments,” reads the memo. “The investigating officer (IO) made findings substantiating five specific concerns among the nine I had raised.”

According to the memo, though, the wing commander ultimately dismissed all of these concerns and declared that “all was well” even with field-grade officers being punished under the Uniform Code of Military Justice for failure to obey an order and conduct unbecoming.

The memo further outlines specific instances of a less-than-stellar command that is apparently full of “misconduct and toxicity.” These include the orthopedics program director at the hospital resigning, leading to an investigation opened by the BAMC commanding general examining “complaints of bullying, counterproductive leadership, failure to treat others with dignity and respect, and a hostile work environment.”

There is also the Deputy Commander for Surgical Services and orthopedics chair being relieved from his position following an investigation that found “‘a failure to treat people with dignity and respect, degrading comments, and regulation violations.”

Finally, there is the group commander who resigned and the Army investigation that found “counterproductive leadership and bullying” at the hospital.

“The systemic flaws I encountered, and the unwillingness of those with the power to make necessary improvements, are what drives me to now resign this command,” wrote Bode.

“We welcome comments and feedback from any of our nearly 14,000 team members who work across the San Antonio Market and take every allegation very seriously,” wrote Air Force Tech Sgt. Tory D. Patterson, an Air Force spokesperson. “We have several helping agencies across our organization and encourage our teammates to seek assistance or raise their concerns and questions on any topic. Every team member — regardless of branch of service, rank or duty title — who works within the Joint Base San Antonio military medical community is a vital asset to our bottom line: Providing world class healthcare to our service members and their families and being ready to deploy and support our nation’s sons and daughters on the battlefield.”

Command is a hard job, and it might leave you with a few complaints on the way out the door. And in this case, calling out some of the dysfunction and toxic leadership around you certainly gets more attention than a rote thank you and farewell.

You can read the entire letter here:


Update: After publication, the Air Force reached out to correct their initial statement, in which they said that there were “9,000 team members who work across the San Antonio Market.” That was incorrect; there are 14,000 members.