After photos of moldy dorm rooms began making the rounds online,  the Air Force has found mold in 1,146 rooms across Joint Base San Antonio in Texas. 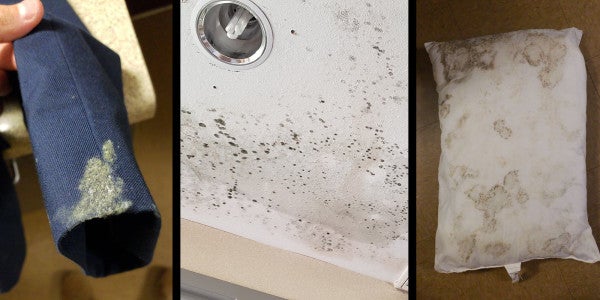 Ask a room full of veterans and service members if they've lived in a barracks with unsanitary conditions, and chances are a lot of hands will shoot up in the air.

Ask if they've complained about those conditions and some of those hands will stay there. Then ask if the complaints went unanswered; those remaining hands will likely stay up.

Now, post video of electrical fixtures in the ceiling leaking water, and photos of moldy showers, pillows, vents, shoes, beds, fans, floors, and walls on social media, and then ask if those complaints were still ignored. Most of those hands will drop like flies.

This is the story of the mold crisis at Joint Base San Antonio-Lackland, Texas in a nutshell.

Over the last week, a string of photos, videos, and screenshots of text messages were published to the popular Air Force amn/nco/snco Facebook page indicating significant issues with mold in dorm housing at the training command.

Those posts quickly garnered the attention of local papers, national news affiliates, and military news publications. After images and video documenting the mold, as well as water damage in some of the facilities at Lackland, came to light, the service mandated inspections at the other buildings on Joint Base San Antonio, which boasts 77 dorms with bed space capable of housing 27,000 service members.

Home to the Air Force's Air Education and Training Command, Lackland is one of three installations that fall under Joint Base San Antonio, the other two being Fort Sam Houston, and Randolph Air Force Base.

So far the service has “inspected 7,080 of 8,279 rooms/open bays across JBSA, and have found the presence of mold in 1,146 rooms, approximately 14%,” according to a July 30 statement and video published to the Facebook page of Brig. Gen. Laura Lenderman, the commander of the 502nd Air Base Wing which oversees the joint base.

While the exact type of mold found in the dorms has not been “medically identified,” more than 220 airmen have been relocated from their rooms as of July 30, with more expected to follow, Jennifer Gonzalez, a spokeswoman with AETC told Task & Purpose.

“Base leaders are actively working a relocation plan that includes relocating residents to other on-base facilities and potentially off base,” she said.

Personnel with the 502nd Civil Engineer Group are “treating rooms with a regimen that includes a bleaching process as well as utilizing dehumidifiers, removing and replacing carpet with vinyl planks, and installing ceiling fans,” according to a July 30 Air Force statement.

The media coverage appears to have prompted the Air Force to recommend that other installations across the service conduct inspections at their base dorms.

“Leveraging lessons learned, the Air Force Civil Engineer Center shared the Joint Base San Antonio experience along with a recommendation that other installations also inspect their dormitories,” Robert J. Leese, a spokesman for the Secretary of the Air Force, told Task & Purpose.

“Additionally, the Air Force is inspecting Air Force dormitories in high-risk areas both within and outside of the United States to gauge the extent of mold problems,” he added. “Results of those inspections will inform any additional actions to protect the health and well-being of our Airmen.”

Despite the efforts of commanders with the 502nd to deal with the mold and to ensure healthy and safe conditions for the service members who live, work, and train on base, there's both concern and frustration that Air Force officials only took action once the issue became public.

Recent posts about the mold at Lackland on the 502nd Air Base Wing commander's Facebook page are riddled with comments from current and former airmen and their families, which largely amount to: We've been complaining about this for a while now. Case in point: these photos from four years ago that were shared by Air Force amn/nco/snco:

According to a statement from the Air Education and Training Command, the “502nd [Air Base Wing] command team was made aware of the situation on July 23 and we are thankful to the Airmen who brought this issue to light.”

However, Air Force amn/nco/snco posted a series of screenshots on July 26 purportedly showing an excel spreadsheet noting mold in dorm rooms at the Lackland dormitories that was dated July 11, 2019 — more than two weeks before the 502nd was reportedly informed of the issue.

A spokesperson for AETC did not respond to request for comment on the slide's authenticity at the time of publication.

“The [Military Training Leader] who sent it to me said that's pretty much been the condition for the last few years, since he's been there, and he mentioned the MTL before him said 'yeah, it's pretty much been like that since my tour,'” the administrator for Air Force amn/nco/snco, himself a retired senior noncommissioned officer, told Task & Purpose by phone, under the condition that his name not be used. “It's been going on, minimum, since 2014, but so many people commented and messaged me, that it seems to go back over a decade, easily.”

“You have to think about this, these dorms, they get inspected constantly,” he said, adding that he's received messages from between 20 and 30 airmen who are currently at Lackland. “They've been tracked and I have no doubt that this has been known and kicked down the road for a long, long time. It's almost laughable to think that, supposedly, that it's been known now since July 23, 2019.”

Regardless of when commanders at Joint Base San Antonio became aware of the mold issues, it's certainly being looked into now. But frankly, that reminds me of an old military adage that's usually delivered sarcastically by commanders or senior enlisted personnel at formation: If you have a problem, call your Congressman. Translation? You're shit out of luck, and this is only getting fixed if you raise hell about it.

In light of the Air Force's response to the mold issue at Lackland, that may need to be updated to: If you have a problem, take pictures of it and post it on Facebook. That, at least, seems to get results.