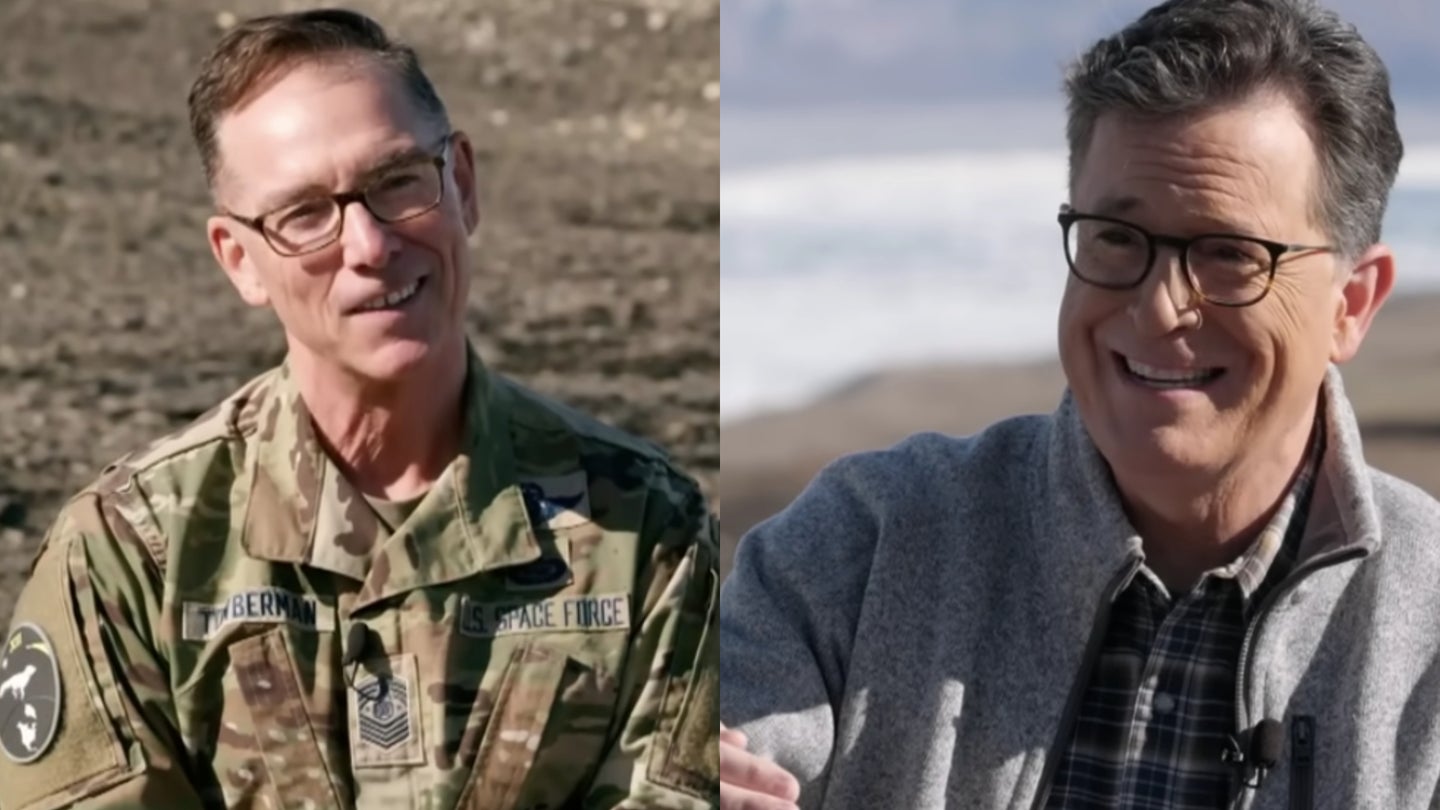 If human beings are having sex in space, it is beyond the knowledge of the Space Force’s top enlisted leader, Chief Master Sergeant of the Space Force Roger Towberman, who was asked about it by comedian Stephen Colbert during a visit to Thule Air Base, Greenland which was broadcast on Colbert’s The Late Show on Tuesday.

“I’m going to ask you a question that I’ve asked multiple people at NASA. They’ve asked me to stop asking it, but I won’t, because it’s important” Colbert asked Towberman while sitting in a desolate, rocky field 750 miles north of the Arctic Circle. “Now we’re both adults, and I need you to answer this question straight: are people doing it in space?”

Towberman shook his head: “I do not know.”

It makes sense that Towberman would not know the answer: after all, none of the 16,000 or so military and civilian members assigned to the Space Force have spacefaring billets, and NASA also insists that no humans have had sex in space.

Still, Colbert asked a few more questions about the topic.

“Find the zero-g spot?” the comedian asked Towberman, who at this point seemed to be biting his lip to keep from laughing. “No? This is when you’re beginning to regret the interview.”

Sex was not the only topic Colbert went over with Towberman and other guardians at Thule. He also asked why space lasers always make ‘pew pew’ sounds, whether the radar installation at Thule can boil the contents of someone’s stomach, and whether the Space Force has any “space babies,” like the one seen at the end of the film 2001: A Space Odyssey.

Towberman was a good sport about it: He is, after all, the same military leader who led an entire conference hall full of people through a rehearsal of the new Space Force song at the annual Air Space & Cyber Conference this September.

“When your brand is crazy, you can’t go out of bounds,” Towberman said in his keynote speech at the conference.

‘Crazy’ was a valuable mindset with Colbert, who also asked Towberman if one of the giant satellite communication dishes operated by the 23rd Space Operations Squadron at Thule was “how you track the mutants,” like the Cerebro device in Marvel’s X-Men comic book series.

Colbert’s is not the first comedy show to visit the Space Force. Earlier this year, The Daily Show correspondent Ronny Chieng traveled to the Pentagon to find out from then-chief of space operations Gen. John Raymond what the service actually does.

“Absolutely not,” Raymond answered. “The mission of the Space Force is really to protect and defend the capabilities that we have in space and to deter conflict from beginning in space or extending into space.”

Frustrated, Chieng asked again what Space Force does, to which Raymond provided an example: Space Force operates and protects the Global Positioning System, the satellite network that has become a pillar for much of the modern global economy.

“Why don’t you open with that?” Chieng asked. “Call yourselves the GPS Force.”

Raymond responded by saying the Space Force does a lot more than GPS, and it’s true: the service protects the intelligence and communications satellites that enable a large part of modern military operations. It also oversees a satellite network that provides early missile warnings for anywhere on the planet. That network paid off in January 2020, when the 2nd Space Warning Squadron detected Iran firing more than a dozen ballistic missiles at U.S. service members in Iraq, giving them crucial moments to prepare for the strike.

But despite the Space Force’s constant vigilance, much of the American public still does not understand what Space Force does, or they confuse it with the Netflix comedy series, or, as one Spirit Airlines employee showed late last year, they don’t even believe it exists.

Part of the reason why the Space Force mission is difficult to understand is that the space domain may seem highly technical and abstract, even though many Americans rely on space technology every time they check their smartphones.

“If you’re a ground pounder in the Army, you have a computer, so even if you don’t code, you have experience with computer networks and how important that is,” Aaron Bateman, an assistant professor of history and international affairs at George Washington University who studies space policy, told Task & Purpose in June. “But because space capabilities are largely invisible, and the terminology of orbital mechanics is arcane, people have a hard time wrapping their minds around what space means for the warfighter.”

When comedians like Colbert and Chieng spend time with Space Force, it gives the three-year-old service much-needed exposure with the American public, and it can even succeed in relaying a general idea of the branch’s complex mission to everyday viewers.

“So even though I’m still not sure what it does, Space Force represents what the American government does best: find new ways to give billions of dollars to the military-industrial complex,” Chieng said. “But hey, if they’re going to offer free GPS, then I say live long and prosper, Space Force.”

Of course, with plenty of space aliens and mutant jokes mixed in for good measure.

“Who picks that up on the other end?” asked Colbert while pointing to a red phone used by guardians at Thule to communicate with the Missile Warning Center in the event that a nuclear attack knocks out other forms of communication.

“Missile Warning Center,” said the guardians in the room with him.

“Or the mutant spice lord that now rules the United States with his roaming gangs of half-nude warrior motorcycle gangs,” said Colbert.

“If he’s working at the Missile Warning Center, then yes,” a guardian said.