“The story of Odysseus is the story of the day after—what happens when the battle is done? … My service wasn’t an accomplishment. It was a liability.” 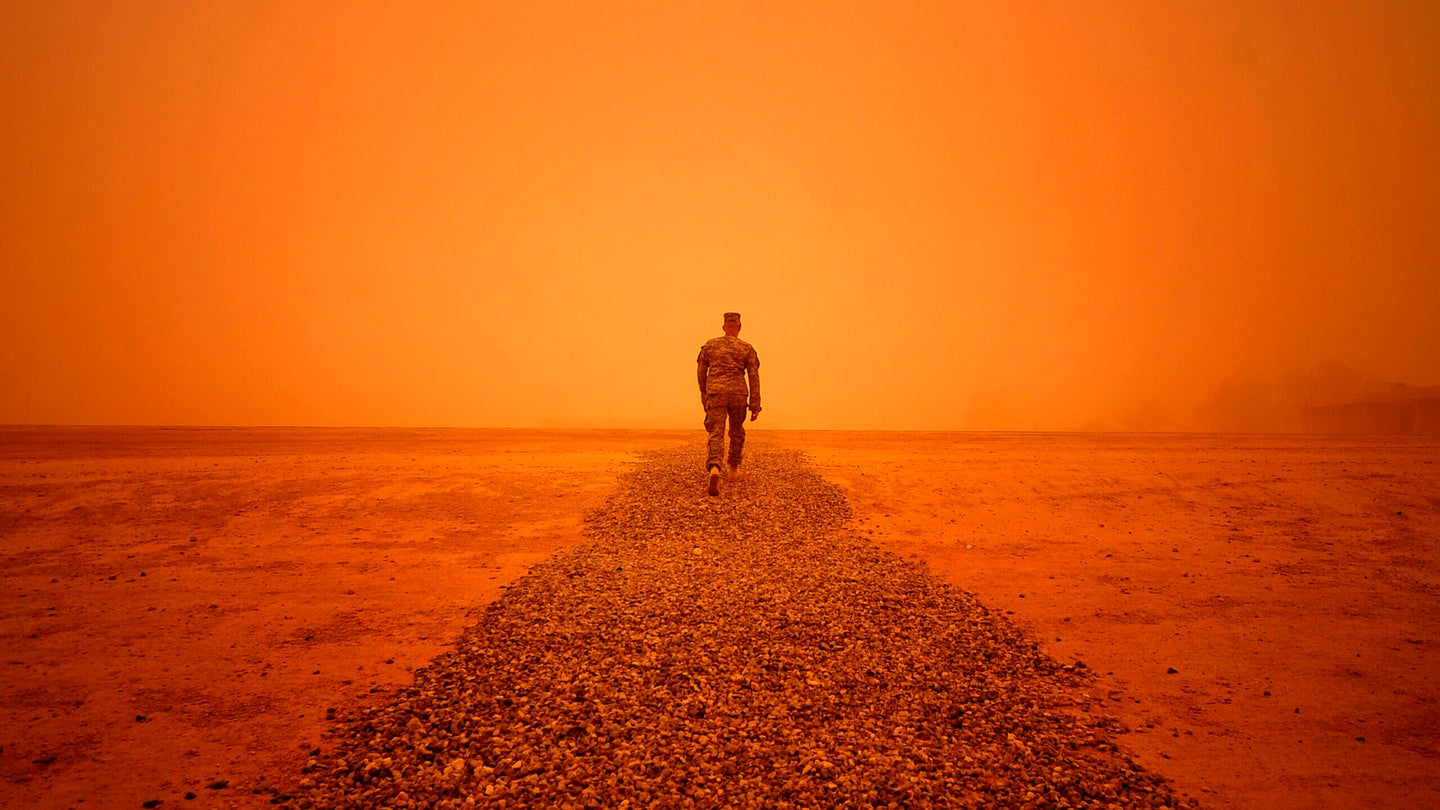 Sing in me, Muse, and through me tell the story

of that man skilled in all ways of contending …

A blind poet’s story of Odysseus, the mighty hero, is a story for the ages. It is a tale of a warrior who overcame great gods, mythic battles, mega monsters, and himself to find his way back home to his beloved Ithaca.

Returning to my Ithaca, I encountered so many venues to sing this song. There were workshops, talks, comedy events, long-distance runs, parades, group therapy, bar sessions, and Greek choruses to help craft and redraft the story.

My military service was publisher gold—the harsher, the better—as many acclaimed veteran writers had proven. After all, my training had prepared me to go into combat and face down death.

Nothing had prepared me to live.

Sitting at the required transition briefing at my last military duty station, I watched a ridiculous civilian brief a room full of soldiers about our Veterans Affairs health and educational benefits.

I zoned in and out until he said, “Not everyone thinks your service is a good thing.”

My mind slowed down.

Before my eyes flashed all the news articles I had read about veterans leaving the service and landing amazing careers.

Weren’t headhunters recruiting Army junior officers like me? Wasn’t I being thanked every time I stepped outside the base for my service?

He was greatly misinformed. America loved its warriors.

Even if things were difficult for veterans, I was surely an exception. As an Army captain with command experience, with multiple degrees, and with combat time, as far as I was concerned, I was a damned unicorn.

Then I left the confines of the base, took off my uniform.

Months and months after applying and applying and applying to hundreds of openings, I sat across from a human resources representative for a “military friendly” company. She had heard me speak at length about my service and deployments. She glanced at the resume I had specifically crafted for the job opening of head basket weaver. She calmly put down my paperwork, looked me in the eye, and said:

“Yes … yes … ” as she waved away my service with her hand, “but you have no real experience, do you?”

In the lobby sat another officer far more accomplished than I, awaiting an interview. The day after, there would be more. It wasn’t the last time I would encounter this.

My service wasn’t an accomplishment. It was a liability. It was just missed years of real employment—as far as I could see.

I started to see my visits to “hero” job fairs—with recruiters who looked dubiously upon my multiple degrees and combat experiences—as a financial and mental health liability to me. They offered no possibilities beyond accepting a resume, then citing a “poor fit” for any positions. One offered me a minimum-wage security guard position, knowing I desperately needed the work.

Where were the former officers from Forbes magazine and the poster children of Fortune 500 military websites? The real unicorns had fled the stables.

Odysseus, when he returned home to Ithaca, didn’t get a welcome home parade. Homer describes a violent conflict between Odysseus’ wife’s suitors and the returning hero.

Ultimately, like all good war stories, the main character wins the battle and the story seems to end.

But the second half is all I cared about. Odysseus had fought for years to get home. In his battle with the suitors, he unleashes levels of violence unprecedented, hanging even his own maids for their perceived treachery. His battlefield is not in the past. He sees it everywhere.

It seems the real lesson of The Odyssey was an unending journey: How now was he going to live?

I was looking for an employer who wouldn’t treat me as the solution to years of fiscal monsters. The personnel mismanagement gods expected me to deliver a solution, like all mythical heroes, like those “skilled in the ways of contending” do.

angry Poseidon—don’t be afraid of them:

you’ll never find things like that on your way

as long as you keep your thoughts raised high. …

unless you bring them along inside your soul,

unless your soul sets them up in front of you.

Have I ever seen Ithaca for what it was?

I had become so wrapped up in my employment that I couldn’t see around me.

My children were growing like grass while I kept watch over at the distant sandstorms of Iraq, as if I were still driving there and wishing at times I was.

I wrote “When Will I Learn” to capture that moment.

When will I learn to slow down

the blur of thoughts, down

the sound of gunfire, down

the pulsing vision when you clear a room,

while the helicopter pilot overhead swears

I saw a trigger man

when will I learn to slow down

the shadow of the Stryker hovering on overpasses  down

to my first review in fair Connecticut

start at the beginning down

drowning between the marsh grass of the Tigris

and the sterling Hudson …

So I put away my service in a box and worked through Veterans Day. I watched resumes come across my desk that dripped in military acronyms, ones I knew would never see the light of day. I read another beautifully crafted document where the veteran had reduced his entire military officer service into a single line.

But the more I ignored who I was, the more I was reminded by my coworkers and others.

“This is probably cake compared to Iraq, right?”

“I don’t think I could have done what you did.”

Finally, there was my sister, Sheeba Varkey, insisting I reconnect and join a writing workshop, of all things.

So I joined New York University’s veterans workshop because it was the closest one I could find. I discovered, after repeatedly having my writing sharp-shot by veteran writers, that I had no skill for short stories and barely any for essays.

But in poems I discovered I could occasionally put order to my thoughts. I wrote and wrote. I was published and invited across the ocean to Oxford.

There, I attended the Oxford Brookes Veterans workshop run by Niall Munro and the poet Susie Campbell, discovering the hero’s journey doesn’t end with the return, but begins.

The workshop helped me to write “The Desert Life.”

When people talk about war

they speak as if it were a wayward son

me to a tent, the years I lived on locusts in ready to eat packets

baptizing and burning all the time

to separate the sound of flags folding from the cries of joy’s embrace. So

on even while I remain

a long way away.

During formal introductions at a company event, I hear the dreaded question come, from a tall man with salt and pepper hair.

“Where did you work before?”

I took a breath and recounted and, as an afterthought, added, “I was also in the military for a bit.”

I resisted saying, like all good soldiers, “Lead the way.”

I walked down the hallway into his office. On the wall, hanging, were the requisite degrees and family photos.

In between all of them was a smudge of green—a younger version of him, standing among a group of men from the Ranger Battalion. I turned to him, eyes widened. He laughed.

It wasn’t the only time I would meet men and women like this. The veterans I had looked for in posters and magazines were all around me. They were doing what I felt I was doing, working and living, quietly and without a narrator’s voice in their ears.

I recall sitting for an interview debriefing. The company I worked for had reviewed multiple candidates, and some veterans and the HR manager asked me, “So what do we look for? What badge, what years of service, what locations?”

What was the combination that ensured the company got a mythic corporate hero instead of raving suitor-killing lunatic?

I didn’t have an answer then.

But maybe, if I was asked again, I would read to them lines from a poem by Amorak Huey, about a young man who learns to shoot and dies overseas, and his friend returns.

Maybe if they had the patience to hear it, I would tell them the protagonist never really comes back. Rather, it’s his friend who returns to an America he doesn’t recognize. He adjusts, and studies to become a teacher, and attends baseball games again, getting used to large crowds. I would go on to explain that he is married now and has children, and that he refuses to define himself by his service.

Maybe if they’re still interested at this point, I would tell them, like the speaker does when asked about the war, about Odysseus and the Cyclops and his miraculous escape through IED-laden roads to return home.

Yes, he was grateful to be alive, and no, he doesn’t need a poet to sing his song, or a paper to publish his works, or an employer to explain to him who he is anymore.

He finally agreed with what Huey wrote about all those who served and those who never did.

“We all want the same thing

Call me nobody. Let me live.”

John Thampi was a captain in the U.S. Army Military Police Corps. He deployed twice to Iraq and once to Afghanistan. He left the military in 2012. His writing has appeared in 9 Lines, The Rialto, Meniscus, Newtown Literary, and the Military Experience and the Arts journal. His work has been anthologized by Oxford Brookes Poetry Centre, Southeast Missouri State, and Middle West Press. He was selected to attend Oxford Brookes Veterans Workshop and has been featured in the Oxford Science and Ideas Festival, BBC Radio, and British Forces Broadcasting Service. In 2020, he won the Darron L. Wright Award for Veteran Poetry.