How To Create Community After Your Military Service Is Over

Within two weeks of moving to New York City, I found myself sitting in a room at the Y. Around... 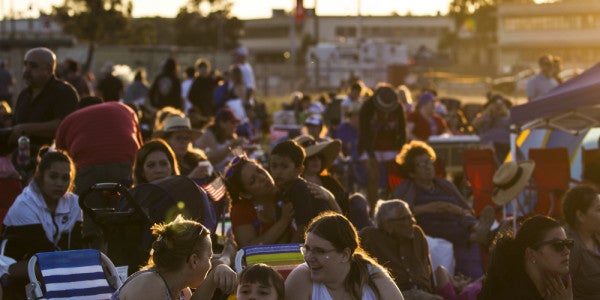 Within two weeks of moving to New York City, I found myself sitting in a room at the Y. Around the table sat men and women of every race, age, and demographics. What we shared in common was our veteran status and our desire to write. That writing group — Voices From War — helped me feel part of something new, but also old, in the largest city of the U.S., one that many people find alienating.

I knew getting out of the Army that I’d lose more than a career. I’d lose a sense of community, purpose, and the easy friendships available when you work so closely together for the long hours the military demands. So, when my husband and I decided to move to a city where we only had a few acquaintances and one or two friends, I started poking around online to see what I could find in the veteran community space.

No matter where you move after the military, even if you’re returning to where you grew up, it takes time and effort to find your sense of belonging. Your civilian job likely won’t provide that as easily as the military did — or at all.

A view of the Big Apple

All it takes is some Googling to find various veteran groups organized around certain hobbies or missions. For me, I gravitated toward anything writing or media related. In my first year post-Army, attended the Voices From War writing workshop, The War Horse’s Writing Seminar, and The Daily Show Veterans Immersion Program. With each event or class, I found myself chatting to all sorts of people. Maybe it’s just me, but I find it much easier to network with and befriend veterans.

You’re definitely not limited to the types of groups I frequented. Friends of mine have recommended Team Red, White, and Blue, an organization with the mission to “enrich the lives of America’s veterans by connecting them to their community through physical and social activity.” Another group great for those like to volunteer is The Mission Continues. I’ve met at least a dozen vets who sing praises about the work that group does.

Try searching for veterans + any interest to see what you find. Off hand, I can also think of acquaintances who’ve attended coding and tech meetups for veterans, joined veteran business owner groups, or who started their own special interest veteran club.

Use technology to find your people

When I was stationed in San Antonio, I was in a unit where my co-workers were mostly gray-haired civilians the same age as my father. The built-in social life I had with my old unit was nonexistent, so I found myself trying to make local, civilian friends. As a millennial, I turned to the internet and tried Meetup.com.

You can find just about any interest on the site. For me, I was seeking outdoorsy, wellness oriented people, so I participated in a hiking group and sampled the outdoor meditation meetup. Although I was only active in about one and a half groups, I joined and followed at least a dozen different ones just in case an event popped up that sounded like my cup of tea.

Your range of selections will depend on your location, with larger cities offering more diverse options. But, don’t let a lack of a group deter you. You can always try creating one of your own. A meetup I was sad I never attended was called Thinkers and Drinkers. So really, anything goes. I will say, with meetups, what you put into it is what you’ll get. The more regularly you participate in one or two groups, the better chance you’ll have of growing real friendships.

Do things you enjoy with people

A simple way to find a community is to do your hobbies with people. This could mean joining a local running club, a Crossfit gym, or a sports rec league. A veteran friend of mine found his people through hashing, an organization that runs and drinks together. He now has a tight-knit group of friends he sees almost every weekend.

If exercise-based groups aren’t your thing now that you’re not forced to pass a physical fitness test, it could be joining a church, taking an after-work amateur art class, joining the local home brewers club, or doing tai chi in the park. Check your local town’s newspaper, Craigslist, and coffee shop bulletin boards for possibilities. Talk to people doing things you’re interested in.

Members of the public gather for the July 4 Fireworks Spectacular at Joint Forces Training Base, Los Alamitos, California, July 4, 2018.Dept. of Defense

This phrase annoys me but seems so appropriate I can’t help including it: You do you. The best way to build an authentic, supportive community is by being you. You’re no longer stuck trying to fit in a general issue sized box. Find the people who enjoy the same hobbies or values as you and start making friends. It’s only as hard as you make it.