Modern militaries often claim that their command system is built around the principles of 'mission command', whereby a commander sets... 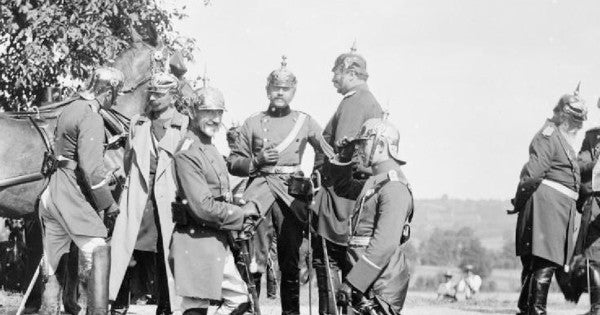 Modern militaries often claim that their command system is built around the principles of 'mission command', whereby a commander sets his subordinate a mission, explains his intent, and leaves the subordinate freedom to decide how to accomplish the task he has been set.

The concept of 'mission command' is often traced back to the Auftragstaktik of the German army of the First World War and earlier. This article argues that, at anything other than the very lowest levels of command, the idea that the German army of 1914-1918 employed 'mission command', is a fiction. While it might have worked for platoon and company commanders, it certainly did not at the divisional level and upwards. Instead, command was continually shifting up and down the spectrum between micro-management at one extreme and delegation and Auftragstaktik/'mission command' at the other.

We can distinguish four phases in the evolution of German command. During the first, under Moltke the Younger, such was the chaos that there was no single clear philosophy of command. Instead, one minute Supreme Headquarters (Oberste Heeresleitung, or OHL) tried to exercise central control.

The next, it would abdicate all responsibility and leave subordinates to their own devices. This phase was too unstable to last longer than a few weeks and ended with Moltke's effective dismissal in September 1914. His successor, Erich von Falkenhayn, knew he was an unpopular choice as Chief of the General Staff and owed his position exclusively to the Kaiser's trust. Within weeks a cabal of senior generals and courtiers was intriguing to get him sacked. The insecurity Falkenhayn unsurprisingly felt manifested itself in a determination to exercise 'grip', either by restricting the resources he made available to his subordinates or by bypassing the normal chain of command and inserting individuals he trusted to handle sensitive operations. Disappointments at Verdun and setbacks on the Somme in the first half of 1916 drained his authority away until, at the end of August, even the Kaiser agreed he needed to go.

The third phase began with the arrival of Hindenburg and Ludendorff at OHL in August 1916. They reacted against Falkenhayn's centralization and delegated power to their subordinates. Crown Prince Rupprecht of Bavaria, commanding the army group fighting the Battle of the Somme, later reminisced that 'for the whole length of the immense and bloody Battle of the Somme, I was given a free hand.' For a few months, the German command structure perceptibly relaxed and approached something close to the mythical Auftragstaktik ideal. As the pressure mounted, however, even during the latter stages of the Somme, Ludendorff reacted by centralizing power and authority in OHL and intervening even in low-level tactical decisions and doctrine.

When disaster struck on the first day of the Battle of Arras (9 April 1917), there were serious failings in the diagnosis of what had gone wrong, which marked the beginning of the fourth and last phase, characterized by two major problems. First, subordinates grew increasingly scared of telling their superiors the truth. Poor information generated bad decisions and repeated failures which in turn led to a lack of willingness to be honest about what was going wrong and so a vicious spiral downwards in combat effectiveness.

At the root of the fear was Ludendorff. A naturally aggressive and controlling personality in any case, exhaustion and growing insecurity about his own position made him shout louder and micro-manage – the second problem – more and more until eventually he was bypassing whole chunks of the chain of command and telling divisions in the front line where to place each individual anti-tank battery. For a man with military, economic and political responsibilities from Belgium to Baku, this was madness.

The root of the trouble was the Kaiser, in whose person a combination of erratic personality, zero responsibility, and unlimited power left his generals chronically insecure about their position. Men lower down the chain of command, like Rupprecht, found it almost impossible to command in these conditions. It's worth emphasizing that it was not the nerve of the army, but of Ludendorff, Hindenburg, and OHL, which cracked first. The demand for an armistice in early October 1918 caused the morale collapse of the army, not the other way around.

So, far from German command being flexible and decentralized as myth would have it, its default position was, in fact, authoritarian and driven from the center. The third, 'Auftragstaktik' period, was the exception and lasted only a few months. The rule was micro-management and second-guessing of subordinates, corroding trust within the whole organization.

Does this have any significance, beyond the purely historical? Perhaps. What matters is that the German army pretended to itself that it was a 'mission command' institution when it was not. This created unnecessary friction and uncertainty. Subordinate commanders were never quite clear where the limits of their authority and responsibility lay, which left room for frustration and confusion and promoted sub-optimal decision-making and combat performance. It is self-evidently important that the philosophy and system of command an army espouses is aligned as closely as possible with its organizational and broader societal culture.

But it is equally, or even more, imperative that it is honest, and clear, with itself about that culture and ethos, and about how its system of command really operates in practice. Many militaries today claim to employ the principles of 'Mission Command'. But how many really do?

Jonathan Boff is an Associate Professor in History and War Studies at the University of Birmingham, UK. He is the author of Haig's Enemy: Crown Prince Rupprecht and Germany's War on the Western Front and Winning and Losing on the Western Front: The British Third Army and the Defeat of Germany in 1918.