The Military Decision-Making Process Is An Inflexible Mess. Here’s How To Fix It

Skilled leaders have discovered ways throughout history to take advantage of ambiguity. And it can counter the overdoses of established... 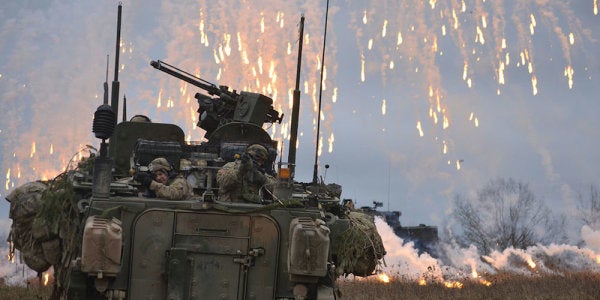 Skilled leaders have discovered ways throughout history to take advantage of ambiguity. And it can counter the overdoses of established measures we use in military planning, by which I mean the Military Decision-Making Process (MDMP).

The historian David Fraser described the ponderousness of operations as a major flaw in the British military during World War II: “There was demonstrated, in British actions, rigidity of mind and reluctance to change positions as swiftly and readily as situations demanded… great fussiness and over-elaboration of detail in orders.”

Unfortunately, that’s a pretty good description of our MDMP. It shocks me that we still use this failing and critically flawed technique.

What we should be doing is embracing ambiguity. Make it our friend on the battlefield. In World War I, for example, if Erwin Rommel was out of ammunition or outnumbered, instead of retreating he would throw his men into fresh surprise attacks. Essentially, Rommel would use rapid movement and bold independent action to create feedback loops. Tim Harford describes Rommel in Messy: The Power of Disorder to Transform Our Lives, “The enemy would be confused; that would produce unpredictable openings; Rommel would seize those openings, creating more chaos and further opportunities.”

Rommel’s messy approach was successful because of his rapid, relentless, and unpredictable movements as it baffled the enemy. Rommel’s philosophy was summed up nicely by Harford, “He developed a distinctive philosophy, founded on the observation that fleeting opportunities often emerge in the confusion of war. Rommel believed that opportunities were often fleeting, and that the chaos in the scramble to seize them was a price worth paying – especially since chaos could give an edge to the side best able to cope.”

Rommel’s approach was similar to a boxer jabbing an opponent, where the boxer continuously jabs until he finds the opponent’s weakness.

The counterpunch to Rommel in World War II was “The Phantom Major,” David Stirling, who was his match in using ambiguity. According to Harford, Stirling’s principles of messy tactics were as follows:

Stirling and his men would constantly adapt and evolve their tactics, even when they had been nearly perfected. As with to Rommel, speed and shock were more important to them than careful planning and preparation. Harford remarked, “On future missions they resolved to move in quickly and silently, even without full knowledge of the target because that would achieve total surprise.”

Rommel and Stirling would have approved of Colonel John Boyd’s OODA Loop. Both men were skilled at getting inside their opponent’s OODA Loop – which is a high-speed decision making and feedback process in four stages: Observe – Orient – Decide – Act. Harford found a unifying thread between countless victories against the odds was the OODA Loop, “The unifying thread between these countless victories against the odds: the way that successful commanders kept changing the situation faster than their adversaries could figure out what was going on.”

In essence, the OODA Loop is quick, heedless of detail, allowing improvisation on the fly. It is the opposite of rigidity of mind and the opposite of reluctance to change. The following is a way to get inside of an opponent’s OODA Loop:

Yes, it is hard, but it is better than losing, which is what you are likely to get by shackling yourself to MDMP. That approach applies an overdose of the status quo. Those who favor MDMP seek refuge in certainty. Those same people simply cannot think in terms of nonlinear networks and are not comfortable with uncertainty. Our military cannot succeed when our default planning system refuses to allow for and adapt to uncertainty.