Thirty-five years ago, the Marine Corps suffered the most casualties in a single day since Iwo Jima when a terrorist... 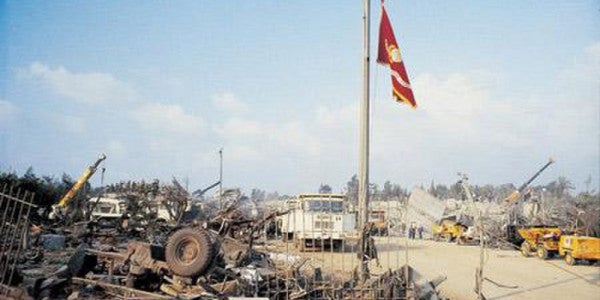 Thirty-five years ago, the Marine Corps suffered the most casualties in a single day since Iwo Jima when a terrorist drove a truck with the explosive equivalent of more than 12,000 pounds of TNT into a Corps barracks in Beirut. A total of 241 service members were killed: 220 Marines, 18 sailors, and three soldiers.

FBI investigators later described the truck bomb as the largest non-nuclear blast they had ever seen.

“I think we all kind of grew up that day because we knew the world had changed,” Marine Corps Commandant Gen. Robert Neller said on Tuesday to mark the anniversary of the attack.

Neller spoke at the Beirut Memorial in the Lejeune Memorial Gardens, at Camp Lejeune, North Carolina. He said it was the first time he had visited the site on Oct. 23, which also marks the anniversary of a second attack in Beirut that killed 58 French paratroopers.

On Oct. 23, 1983, Neller was a captain assigned to The Basic School at Quantico, he said. His wife was back in Michigan, pregnant with their second child. While he and his fellow Marines were aware of the peacekeeping mission in Lebanon, “We didn’t know the dangers and the horrors of war.”

When he got to work that day, he remembers someone telling him that the barracks in Beirut had been attacked.

When he saw the list of Marines killed in the attack, Neller recognized one of the names: Maj. John W. Macroglou, with whom Neller had served in San Diego. Shortly afterward, Neller asked a three-star general about his family, only to learn that the general’s son had been killed in Beirut.

“I think it changed how we all look at the world,” Neller said. “I think it changed all of us and I think it made us realize that it’s a dangerous place out there and the reason our nation has Marines is so we that can go to bed at night and not have to worry about stuff like that.”

When looking at the names on the Beirut Memorial, Neller is reminded of the time when a reporter asked him what he would say to the families of Marines and soldiers under his command who had been killed in Iraq.

“I said, ‘I would tell them that they did their duty,’” Neller recalled. “And I knew the minute I said that it was insufficient.”

He later told the reporter that what he should have said is this: Imagine a world where no one is willing to step forward and volunteer to protect and defend the Constitution in war and peace.

“We don’t live there,” Neller continued. “We live here. And as long as we have men and women from communities like this, who are willing to stand up and raise their hand and say, ‘I’ll go;’ we’re going to be just fine. And when I think of the names on the wall behind me, that’s what those Marines did: They said: ‘I’ll go; I’ll accept the risk; I will do my duty.’”