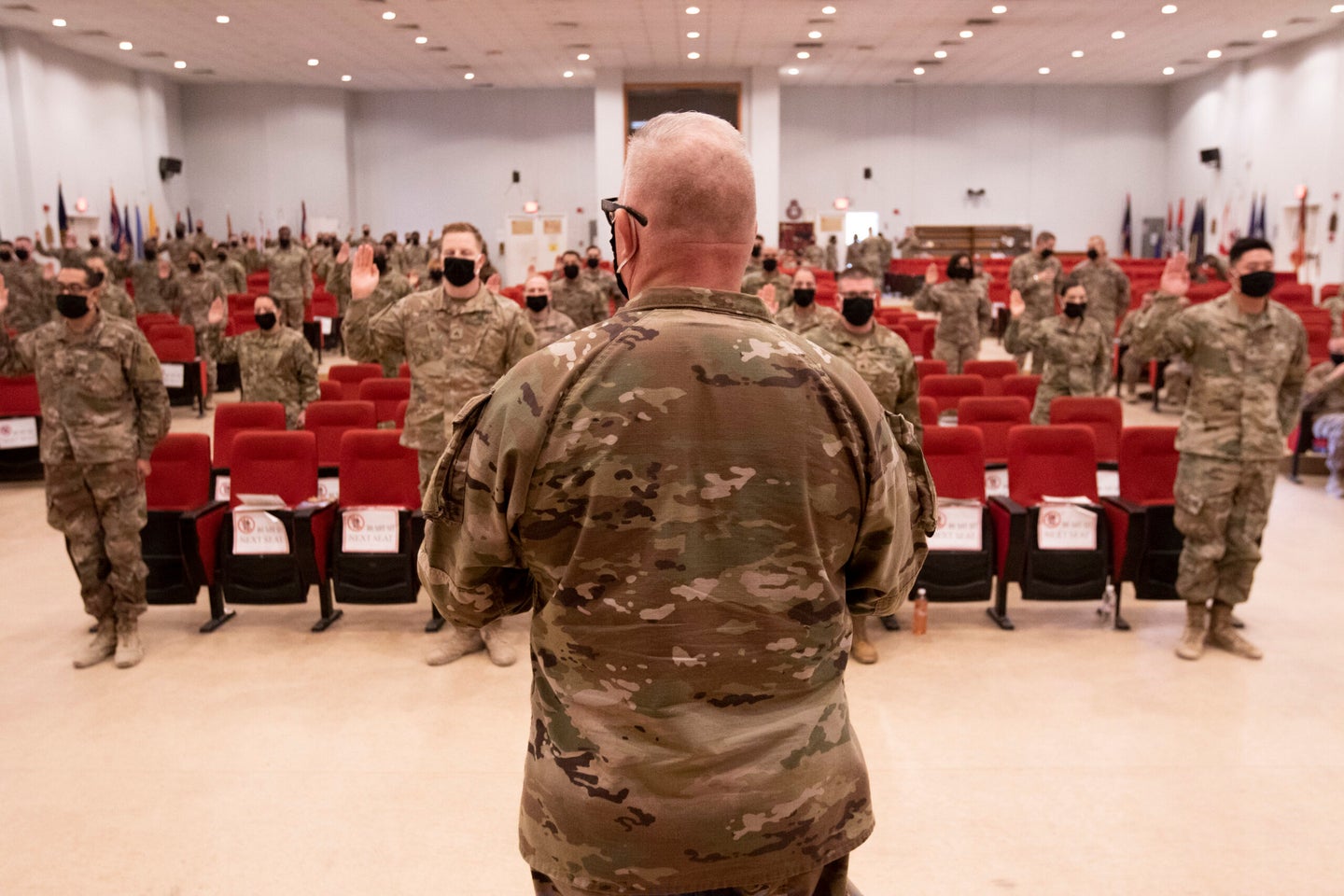 The Army is changing the way soldiers are promoted to the ranks of sergeant through sergeant major in order to help some soldiers avoid stalling their career advancement over things like deployments to combat zones or starting families.

Starting Jan. 1, soldiers who qualify for promotion but are unable to attend the mandatory professional military education (PME) courses for one of three specific reasons will be temporarily promoted and given a set amount of time to complete the PME before their promotion is permanent, according to policy guidance released on Tuesday.

Previously, soldiers were required to complete their PME course before they could be promoted to their next rank, but in order to attend the course they needed, the soldier couldn’t be on a profile of any kind.

According to Sergeant Major of the Army Michael Grinston, that system impacted three groups of people the most: women who were pregnant, or who had just had a baby because they weren’t able to take the required fitness test; soldiers who were preparing to deploy, which units would decline to send to the PME course in order to “meet operational requirements;” and master sergeants enrolled in the non-resident sergeants major course, who “finished slightly later than the residence corps” and weren’t eligible for promotion “despite being part of the same cohort of students.”

“I believe none of these scenarios — starting a family, deploying to combat zones, or selection to the non-resident sergeants major course — should be a reason a soldier’s career should be delayed,” Grinston said.

Sgt. Maj. Mark Clark, the senior enlisted leader of the Army’s personnel office, broke it down further and explained how the policy will change the processes for those three cohorts.

In 2019, he said, the Army processed around 300 exception-to-policy requests from soldiers asking to be promoted without their professional military education. The new temporary promotion policy will make it the standard — not the exception — for soldiers who are deployed and unable to attend their PME course, but otherwise qualified for promotion, to be temporarily promoted “with their peers” and given one year from their redeployment to complete the required PME.

Grinston called the 300 requests a small number; if the number of troops deployed to combat zones increased, he said, so would the number of exception-to-policy requests.

“What if we went back to full-scale combat in the future?” Grinston said. “Does our policy allow us to do those promotions more routinely then what we have right now?”

Under the old policy, Clark said, women who were pregnant or who just gave birth were simply not allowed to attend their required PME course because of their pregnancy. Now, they will be temporarily promoted, if they are otherwise qualified, and have two years from the time their postpartum profile ends to complete the PME.

If any soldier who has been temporarily promoted then fails to successfully complete the PME in the time given to them, they will revert back to the rank they were pre-promotion and start over. Grinston said that they will not be responsible for paying for anything in the case that they fail to complete the PME.

The temporary promotion will include pay and allowances until it’s either made permanent upon the completion of the PME, or it expires and the soldier is reverted back to their original rank.

As for questions about if someone should be promoted before they’ve done the required PME, Clark said that ultimately, soldiers won’t be in that situation unless they’re ready.

“In order for a soldier to get to the point that they qualify for these temporary promotions, those soldiers have already demonstrated that they have the potential to perform at the next highest level, and they have been recommended for promotion by their commander,” he explained. “So there’s already been a process established to validate their ability to perform at the next level.

“The final step is validating them with training, so I don’t believe we’re blindly promoting individuals — these are well-deserved promotions of soldiers who demonstrate the ability to perform at the next level.”

Related: Army removes indicators of race and gender in soldier promotions in an effort to fight bias