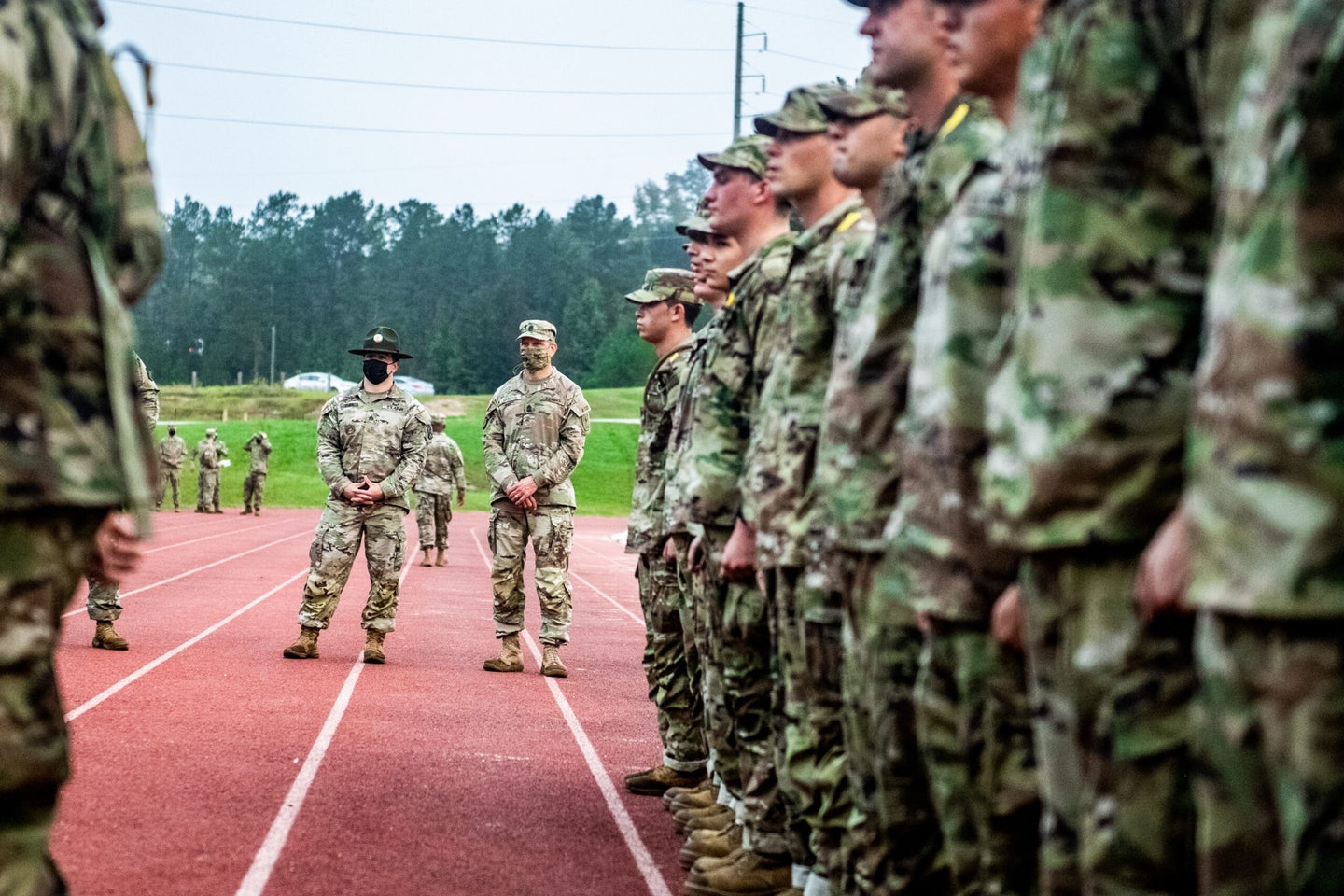 Sergeant Major of the Army Michael Grinston is a little sick of everyone claiming that the Army is getting soft on new infantry soldiers.

The service announced last month that it was ditching the drill sergeant “shark attack” at Fort Benning, Georgia, for a different approach — one which some worried was a bit too “gentle” for the Army.

So Grinston went right to the source and visited Fort Benning on Friday to see the new training in action.

“How ‘easy’ does this look?” Grinston tweeted:

Grinston touched on the issue last week at the Association of the U.S. Army’s annual conference when he was asked during an event how the Army will “continue to provide ready soldiers and not ‘soft soldiers'” by getting rid of the shark attack.

“I don’t think we’re building soft soldiers,” he said at the time. “Instead of screaming at them and they go ‘I don’t know what you’re talking about,’ we’re going to bring them in and tell them what it means to be on a disciplined, fit, cohesive team … it’s just a better way to do it, and then you don’t have to confuse anybody by sitting there yelling at them something that they actually don’t know.”

In a video posted to Twitter on Friday, Grinston said there have been “a lot of questions” on the new event, claiming that the Army is “getting kinder, and gentler.”

“Well, it doesn’t feel like it,” he said before asking a drill sergeant if he thinks the new training is “easier or harder” for the recruits.

I’ve heard a lot of chatter here about basic training becoming kinder…at the Infantry School, we are using the “First 100 Yards” starts with trust and builds a foundation for the rest of the Soldiers’ lives. https://t.co/GiK1KqTllJ

Grinston watched as the recruits went through the five phases of the new ‘First 100 Yards,’ which includes “a mock battlefield re-supply mission, physical fitness tasks, and a demonstration of the weapons, equipment, and methods infantry soldiers use in combat,” according to an Army press release.

“Coming to the end of Phase 2 almost a full hour of non-stop training…let’s ask the Privates if this is ‘kind’ …” Grinston tweeted.

Coming to the end of Phase 2 almost a full hour of non-stop training…let’s ask the Privates if this is “kind” … https://t.co/GuLfEmjJUE

Fort Benning Command Sgt. Maj. Robert Fortenberry said in an Army press release  last month that the shark attack created “a chaotic environment” which betrayed “the innate trust between teammates and worse, betrays the crucial bond of trust with our leaders.”

But the new approach, Grinston said, feeds into his “This is My Squad” initiative, which is all about building cohesive teams that look out for one another.

“It really fits in when I’m saying, and the whole Army is saying this is my squad — we’re building that, right from the first day going right into basic training,” he said on Friday.

In another video, Grinston showed recruits practicing the leg tuck portion of the Army Combat Fitness Test, which has been identified as one of the hardest parts of the new fitness requirements.

“While competing as a squad — these trainees are already learning an important lesson: during the next 22 weeks, they’ll need EACH OTHER to make it through,” Grinston tweeted. “Motivation is key.”

While competing as a Squad – these trainees are already learning an important lesson: during the next 22 weeks, they’ll need EACH OTHER to make it through. Motivation is key. pic.twitter.com/MbBFRSXhp4

Still not convinced? Grinston is happy to point you to the nearest recruiting station to find out for yourself.

“If you still have any doubts,” he tweeted. “@USAREC is standing by.”

The next 72 hours will be closely supervised by Drill SGTs to ensure these Privates are ready to train and meet the standard.
If you still have any doubts, ⁦@USAREC is standing by. pic.twitter.com/v8KvUz4vCi