‘If it’s not easy, make it easy:’ US Army leadership in Korea is sick of the bureaucratic BS

These dudes are not abiding. 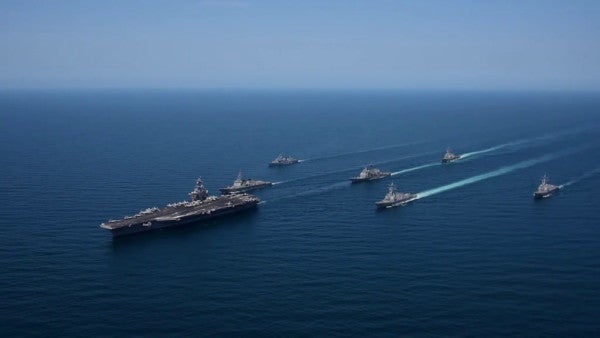 The bureaucratic red tape found in the U.S. military is so abundant and chaotically intertwined you could accidentally strangle yourself on it if you aren't careful.

But in South Korea, Army leadership is saying “enough is enough,” and The Big Lebowski has a small part in turning things around.

Army Brig. Gen. Patrick Donahoe, Deputy Commanding General-Operations with the Eighth Army, mused in a tweet in May about the meaning of “The Dude abides,” from The Big Lebowski.

“The Dude exists in peace with the many things that perturb him. There are issues and problems, and he 'abides' them, which means that he endures them and accepts them,” Donahoe tweeted.

Donahoe told Task & Purpose in an interview that in the military, “like in any other bureaucracy, you run into those folks who are … so married to their own bureaucratic position that they can't see the reasons behind change and why it's required.” He said he was looking to The Dude as he considered what he should do — abide, and wait out those that aren't ready for change? Or bulldoze through?

“The Dude abides” essentially means, “The Dude is,”The Dude exists in peace with the many things that perturb him. There are issues and problems, and he “abides” them, which means that he endures them and accepts them, withholding his approval but vowing his non-interference. pic.twitter.com/wIgjn7ClMs

He, along with the other senior leaders in Korea, decided to keep pushing to change things for the better.

In other words, these dudes are not abiding.

“If it's not easy, make it easy,” Donahoe said that Gen. Robert Abrams, commander of U.S. Forces Korea, has told his team.

The driving force behind the call for change is how much being stationed in Korea has changed; Donahoe said it was his first assignment in 1989, and his father deployed there in the 1950s, but Korea is “so much different than what a lot of folks still remember.”

For starters, the U.S. military footprint in Korea has grown exponentially. Donahoe said what used to be around 5,000 people has jumped to 30,000 Americans at Camp Humphreys alone. One example of something they're trying to overhaul is the process soldiers have to go through to get cars registered on Camp Humphreys. Whereas having a vehicle may not have been a necessity in years past because of the size of the base, it's crucial now.

When soldiers arrive at Camp Humphreys, Donahoe said, they can register one car. To have a second car registered, you have to receive an exception to policy, which requires a sign-off from any number of people up the chain of command. It could take weeks, or even a couple of months.

“A perfect example would be my wife and I were out in town on a Saturday, and ran into a young couple. Wife was obviously about 7-8 months pregnant, and sure enough they were waiting for their exception to policy to be approved,” Donahoe told Task & Purpose. “That's pretty daunting when you know the soldier's going to work at 5:30, 6:00 in the morning … and we've got a pretty-far-along pregnant American spouse downtown whose got to try and navigate that without having a car.”

No more: Donahoe said Abrams made a decision a couple of weeks ago that there's “no more exception to policy,” and to make sure that it's an easy process for families in Korea “to get what is substantially something you really need to work and operate and live in Korea.”

Other things leadership in Korea are tackling include everything from maintenance in soldier housing and spouse hiring, since he believes that spouses having to give up their careers to come to Korea is “a non-starter.” He also said the curfew for soldiers, which was recently temporarily lifted, has been a “pleasant surprise.”

Abrams, along with Lt. Gen. Michael Bills, Commanding General of the Eighth Army, Donahoe, and the rest of Army leadership in Korea are setting up town halls around the installation to hear from soldiers and their families about what isn't working.

“If we bubble-wrap ourselves from what's truly going on, we won't fix those things that are the true barriers to getting folks to come to Korea,” Donahoe said.

At the end of the day, Donahoe believes the key to overcoming these hurdles is for senior leaders to have “bureaucratic stamina,” and the ability to see the holes in the status-quo, and question why and how they got there.

“If you allow your status-quo to just stand, and if you're not willing to just constantly confront the bureaucracy over those things that need to change, you'll never actually implement change,” Donahoe said. “You can have all the great ideas you want, but unless you're willing to put in the time face-to-face in confrontation with the status-quo bureaucracy, you will never implement that change.”

WATCH ALSO: This Weird Fighter Got The First Air-To-Air Kill Of The Korean War