U.S. military forces in South Korea aren’t taking any chances after the widow of a retired soldier tested positive for the coronavirus, the first US Forces Korea-related individual to do so according to military officials there 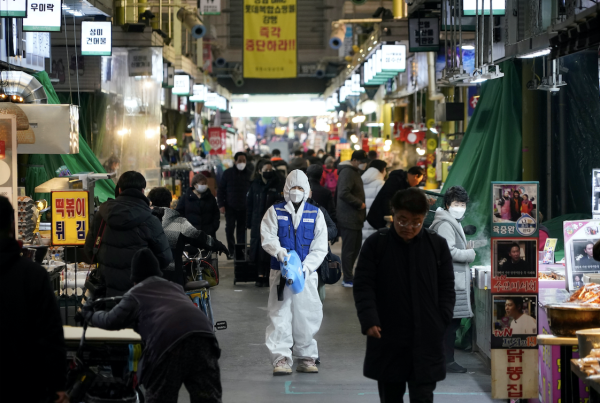 U.S. military forces in South Korea aren’t taking any chances after the widow of a retired soldier tested positive for the coronavirus, the first US Forces Korea-related individual to do so according to military officials there.

As a result, USFK command raised the risk level to “high” for service members across the Korean peninsula “as a prudent measure to protect the force,” USFK announced in a statement on Monday.

The alert comes as the number of confirmed cases in South Korea rose over 800, with seven deaths, the New York Times reported on Monday.

According to Stars & Stripes, Col. Michael Tremblay, the garrison commander at Camp Humphreys, said that some troops had also been quarantined “out of an abundance of caution” because they had either been to China or been tested for the virus and were awaiting results.

The schools at Humphreys have also been closed for the week, Stripes reported, and the command would “begin to limit all soldier movement,” Tremblay was quoted as saying.

A Stripes reporter also photographed a USFK soldier checking the temperatures of people attempting to enter Camp Walker, which sits in the middle of the Coronavirus-affected city of Daegu, in the southeast part of the country.

The 61-year-old widow who contracted the virus had visited Camp Walker’s Post Exchange on Feb. 12 and 15, USFK wrote in its statement, prompting Korean and American health professionals to try to figure out if others were exposed.

In the meantime, the command encouraged all personnel to wash hands with soap and water or use hand sanitizer, to not touch your face or eyes with unclean hands, to avoid handshaking, unnecessary contact with others and non-mission essential large gatherings.

“Clean all common-use areas and items, use caution when traveling off-installation, and most importantly if feeling sick or ill, avoid going to work or school and seek medical treatment for proper diagnosis,” the command wrote.

The global total of confirmed cases stands at 77,150, The Washington Post wrote on Monday, and a cumulative death toll of 2,592.