What Happens When Military Leaders Call For Dissent? Considering McRaven And Goldfein

Retired Adm. William McRaven, a career SEAL and a former JSOC commander, followed the stripping of a security clearance of... 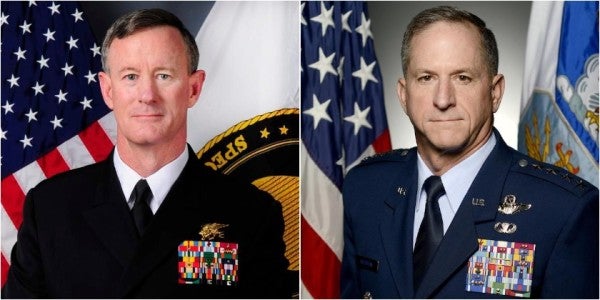 Retired Adm. William McRaven, a career SEAL and a former JSOC commander, followed the stripping of a security clearance of former CIA chief John Brennan by asking the president to do the same to him. “Few Americans have done more to protect this country than John,” McRaven wrote. “He is a man of unparalleled integrity, whose honesty and character have never been in question, except by those who don’t know him.”

So, he wrote, “I would consider it an honor if you would revoke my security clearance as well, so I can add my name to the list of men and women who have spoken up against your presidency.”

I am a bit ambivalent about McRaven’s action. I generally think it is better for retired flag officers to stay out of politics. But this is a case where politics intruded into professional judgement—that is, Trump is angry with Brennan over that former official’s statements that were within the purview of his job.

Meantime, in an entirely positive move for military professionalism, Gen. David Goldfein, the chief of staff the Air Force, saluted an internal critic of the service’s personnel policy and asked him to keep it up. He even offered him a job, writing, “If you are up for it, I have a place for you to help Secretary Heather Wilson and me with a complete re-examination of our officer promotion system to ensure we are selecting the very best in our ranks for promotion and key responsibilities.”