In late 2001, I lifted off the USS Bataan in a CH-46E Sea Knight helicopter toward Afghanistan as part of... 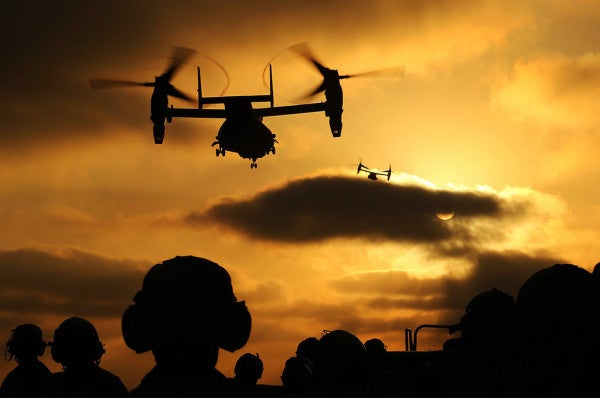 In late 2001, I lifted off the USS Bataan in a CH-46E Sea Knight helicopter toward Afghanistan as part of the 26th Marine Expeditionary Unit. I was one of the first pilots to push into Afghanistan after 9/11. The trip to the Taliban birthplace of Kandahar meant an arduous flight through the mountains, pushing the 35-year-old “Battlephrog” close to its operating limits and range. We had to make a fuel stop at a remote base in Pakistan followed by a long flight across open desert, often flying on instruments through a sandy haze.

Eight years later, I was on the first flight of the MV-22B Osprey into Afghanistan, again off of the USS Bataan. That morning we received pre-mission pep talks from the entire leadership of our command, including a prayer from the chaplain. From our senior officers’ serious demeanors at the time, one could be forgiven for thinking we were preparing for D-Day. Fortunately, all we had to do was lazily climb several thousand feet to “The Boulevard,” the aerial highway for military aircraft transiting from the Arabian Sea to Afghanistan. A couple hours later, we were touching down on the runway at Camp Bastion. It was about as eventful as a flight from Des Moines to Minneapolis.

Since then, Ospreys have performed the lion’s share of Marine assault support in Afghanistan and other contingency operations. “Assault support” is Marine-speak for transport — taking personnel and gear where they’re needed. That often means taking passengers and supplies from one base to another. Other times, it means taking troops into the field, sometimes in close proximity to the enemy. Ospreys have participated in countless “named operations,” military jargon for significant missions in support of troops in combat.

Most recently, Marine Ospreys have taken a major role in providing long-range casualty evacuation support throughout the Marine area of operations in Afghanistan.

While casualty evacuation sounds similar to the more famous medical evacuation mission done by Army Blackhawk helicopters, call-signed “DUSTOFF,” the missions are very different. MEDEVAC aircraft are unarmed, are used exclusively for medical support, and fully equipped as such. The red crosses on the aircraft testify to their unique mission and to Geneva Convention protection, for whatever that’s worth against an enemy like the Taliban.

Casualty evacuation on the other hand — CASEVAC — is done by armed aircraft, without red crosses emblazoned on their sides. Often, a CASEVAC aircraft is simply one that just dropped Marines onto the battlefield and stays overhead, ready to pick up any wounded from the mission. Other times, a squadron might have one or two standing alert on the flight line. Marine CASEVAC aircraft usually have little specialized gear other than stretchers and the medical supplies normally carried by Navy corpsmen.

The recent drawdown of forces from Afghanistan meant the shuttering of remote forward operating bases, many of which had medical facilities, and sometimes surgical hospitals with MEDEVAC aircraft. As the number of FOBs decreased, the distance between possible points of injury and medical treatment increased.

But there’s a term used in the military — “a golden hour” — the hour that starts the moment a service member is wounded. If you can get that person to a hospital within that hour, the thinking goes, the chances of survival are substantially higher.

That’s where the unique speed and range of the Osprey comes in. The Marine Corps went outside its usual doctrine and outfitted Ospreys with advanced medical equipment and additional corpsmen, something closer to the MEDEVAC mission that the Corps traditionally rejected. Now casualties can get to medical care inside the golden hour from much greater distances.

Shifting away from an offensive mission to an overwatch mission in Afghanistan freed up an asset that perfectly fit a new role. The Osprey had already started to move into additional missions. It regularly does aerial delivery, dropping supplies via parachute. It does airborne command and control. It’s being tested as a platform for aerial refueling. The Navy is considering it as a carrier onboard delivery replacement. Every tacky concept drawing from the Bell-Boeing V-22 Osprey promotional materials of the 1990s is now becoming reality, albeit much later than they originally foresaw.

The Osprey opens up possible solutions to a worsening problem. With fewer machines and people going forward, the military’s answer is a “plug-and-play” strategy for existing platforms.

The Osprey isn’t the only aircraft to see this happen, just the latest and most prominent. For example, the KC-130J Hercules has picked up several additional duties, namely “Harvest HAWK” packages for surveillance and close-air support. LITENING pod-equipped AV-8B Harriers are capable surveillance platforms. The UH-1Y Huey helicopter performs close-air support, command and control, as well as some assault support.

The right aircraft plus the right mission kit is almost like owning another aircraft for the price of one.

Additionally, America’s shrinking naval presence overseas has made the Osprey even more relevant. Fewer amphibious ships and overseas bases means each one has to cover a greater area, just as Afghanistan showed on a smaller scale. The Osprey offers a growth capability that traditional rotorcraft can’t.

The Osprey still has issues, but today it’s a “low density, high demand asset,” as military bureaucratese would put it. Its flexibility, speed, and range make it well suited to the limited assets and far-flung contingencies the military faces. This aircraft, and ones like it, are going to be the future of the U.S. military, like it or not.