Why We Shouldn’t Cut Military Bands From The Budget

Military bands form a tradition — a living tradition that continues even today. But budget tightening and fat cutting have... 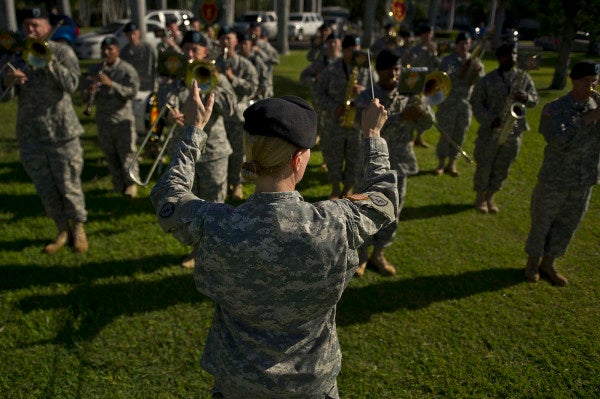 Military bands form a tradition — a living tradition that continues even today. But budget tightening and fat cutting have put the Pentagon’s continued support of that tradition under a microscope. Entertainment is “just not the role of the military,” Arizona Rep. and retired Air Force Col. Martha McSally recently told the website Politico. As a member of the House Armed Services Committee, she is one of several lawmakers pressuring the Pentagon to take a long hard look at its spending on military bands. And while it’s probably true that military bands should share their equal burden of cuts in an atmosphere of tightening budgets, it’s important to keep in mind the important role they play. Instead of thinking about budget cuts for military bands and simply downsizing, it would be more constructive to think of making them more efficient at what they do.

According to Belleville News-Democrat, as of 2010, the military was spending over $500 million annually on its bands. The Army was the largest spender, with a budget of $195 million. One analysis cited in the report put the annual cost of Pentagon music and entertainment programs at $1.5 billion annually. Even after significant cuts, in 2013 combined budget for military bands was still $300 million. And by 2015 it had even crept back up to $437 million a year, according to Politico.

There are a couple reasons for the hefty price tag. One is the number of bands themselves. The Army has nearly 100 bands composed of 4,350 personnel. The Air Force has 15 bands, the Marine Corps 12, and the Navy 11. And while McSally made clear to Politico that she understands the ceremonial function military bands play at things like funerals, parades, and formal ceremonies, she also said, “when we’re at a place where we’re having this conversation about being at a crisis level of readiness and force structure and manning for our military,” and maybe military bands should be something we look at downsizing.

Another reason for the high cost is the musicians need to be kept in working instruments, which can be incredibly expensive. Just check out the contracts for instruments that have been posted on the Federal Business Opportunities website: nearly $27,000 for a tuba this year, an $88,000 Steinway piano in 2013, and $33,000 for three flutes in 2015.

These exorbitant prices, and the mystifyingly large number of ensembles, are what have some members of Congress pushing for a Government Accountability Office review of military bands across the board. According to the latest National Defense Authorization Act, “The [House Armed Services] committee believes that the services may be able to conserve end strength by reducing the number of military bands.” In other words, during a time when budgets are being cut and constrained, it doesn’t really make sense to be spending so much on military bands, according to certain members of Congress.

Military bands may not be essential for combat, but they also may not be as superfluous as their detractors claim. According to the Army bands field manual (12-50), military bands “serve as representatives of senior commanders in multinational operations or to the host-nation population.” And throughout its history it has. The 369th Regiment band, or “Harlem Hellfighter Band,” introduced jazz to Europe during World War I. In 1996, a military blues band was used to connect with Russian soldiers in Bosnia. A State Department officer claimed that the band did more for U.S.-Russian relations in 90 minutes than he had been able to do in an entire month. The Pentagon already spends $4.5 billion annually for non-band public affairs and community outreach worldwide. If anything, military bands are an incredibly cost-effective supplement to those efforts.

Maybe most importantly though, military bands are used to fulfill constitutional obligations, one of the most solemn of which is playing taps at military funerals. And despite the seemingly exorbitant price tag of military bands, there’s been a recent shortage of taps players at funerals. In some instances they’ve even had to resort to pre-recorded versions of the song on portable stereos.

I understand Congress has to make tough choices, that budgets have to be created, negotiated, and capped. And I really do get the concerns of people like Rep. Betty McCollum, a Democrat from Minnesota, when she rhetorically asked, “Is the United States really going to borrow money from China and other foreign countries so the Defense Department can spend billions of dollars for its 140 bands?” But these fiscal priorities have to be weighed against things that are equally as valuable: tradition, outreach, and constitutional obligations.

And while it makes sense to make military bands as efficient and cost-effective as possible, simply making cuts might be too heavy-handed a tactic to actually fix many of the issues American military bands have. How will it help with the shortage of Taps players? How will it serve to strengthen military bands as ambassadors of American spirit and improve their power to raise esprit de corps? In other words, maybe cuts have to be made, but while we’re at it, let’s make sure to preserve, if not improve, military bands’ ability to perform their weighty tasks.