"It is time to stop the horror unleashed on the people of Ukraine." 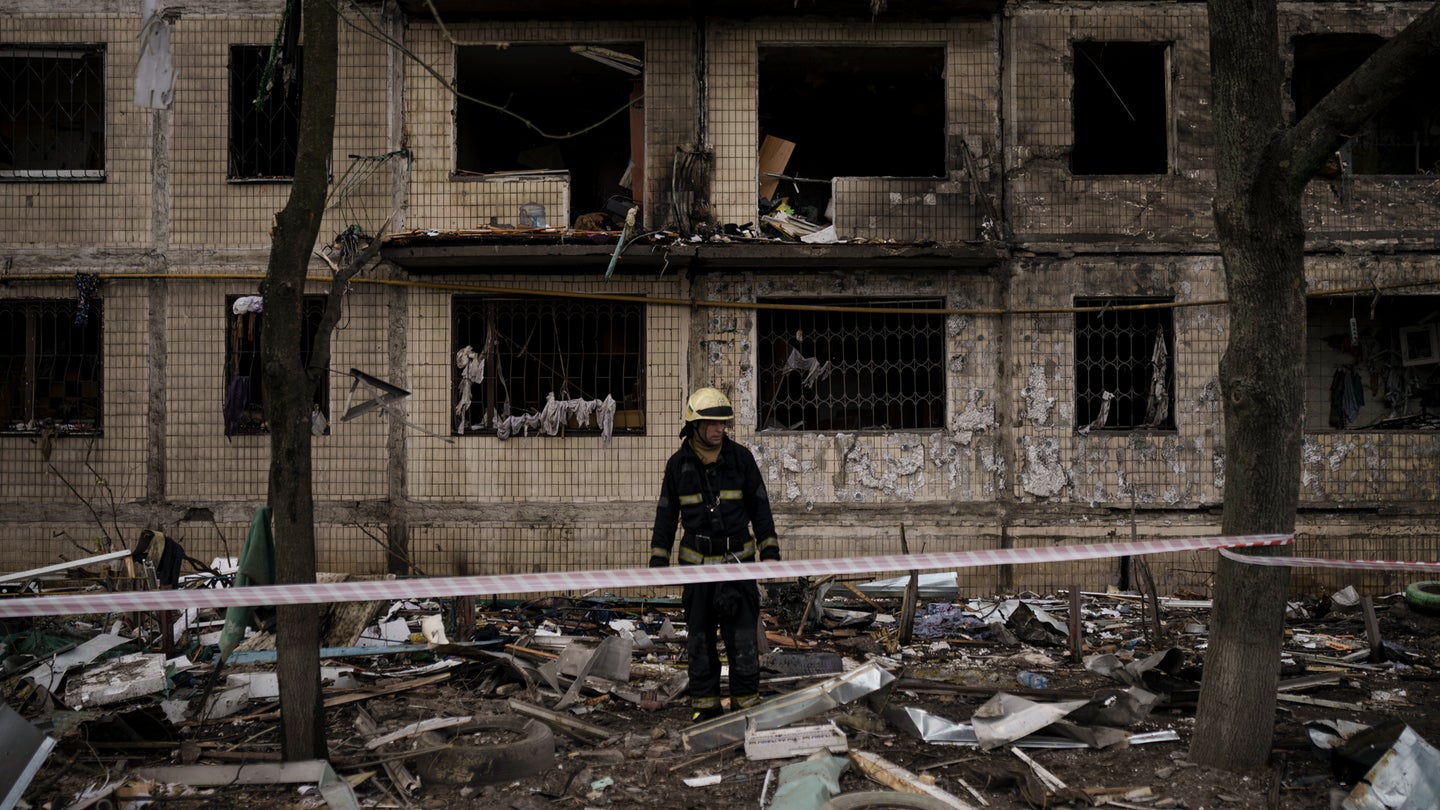 A Ukrainian firefighter walks outside a destroyed building after it was hit by artillery shelling in Kyiv in Kyiv, Ukraine, Monday, March 14, 2022. (AP Photo/Felipe Dana).
SHARE

Almost three full weeks since the invasion began, Russian forces are largely stalled in Ukraine while a crisis which the Red Cross called “nothing short of a nightmare” continues to unfold for civilians.

A U.S. senior defense official told reporters on Monday that almost “all of Russia’s advances remain stalled” in the country, which the official largely attributed to Ukrainian resistance.

“The Russians, for all their inventory and for all the munitions that they have available to them and to their aircraft, they still have not achieved air superiority over the skies of Ukraine,” the official said during a background press briefing on Monday.

While Russia’s invasion has not gone according to plan for Russian President Vladimir Putin, it has been devastating for Ukrainian civilians. Antonio Guterres, the United Nations Secretary-General, said on Monday that “Ukraine is on fire,” and is “being decimated before the eyes of the world.” Almost two million people have been displaced inside Ukraine, Guterres said, adding that the “prospect of nuclear conflict, once unthinkable, is now back within the realm of possibility.”

“Make no mistake: everyday people, especially women and children, will bear the brunt of this unfolding tragedy … It is time to stop the horror unleashed on the people of Ukraine and get on the path of diplomacy and peace,” Guterres said.

As of Sunday, more than 2.5 million people have fled the country into neighboring nations. Filippo Grandi, commissioner of the United Nations’ refugee agency, called it “the fastest refugee crisis in Europe since World War II.”

Robert Mardini, the director-general of the International Committee of the Red Cross, told the Associated Press on Monday that the war is “catastrophic” for civilians.

“People are in desperate need to take shelter, and this is why the situation cannot, cannot continue like this,” Mardini said. “History is watching what is happening in Mariupol and other cities and civilians must be protected. So whether [it’s] a cease-fire, or a combination of a cease-fire and safe evacuation of civilians, is an absolute must.”

Indeed, the world watched as yet another weekend in Ukraine was marked by violence, including the death of American journalist Brent Renaud, who was shot and killed in Irpin, just outside of Kyiv.

On Sunday, Russian attacks inched closer to NATO territory after missiles blasted the Yavoriv International Center for Peacekeeping and Security near the Polish border. The training base in western Ukraine was a “key link between Ukraine’s armed forces and Western military before the war,” as the New York Times reported, hosting troops from partner nations like the U.S. and Canada. Local officials told Reuters that 35 people had been killed, and 134 were injured.

The senior defense official said on Monday that the strike “will not affect” U.S. security assistance coming into Ukraine, adding that there were no U.S. military personnel, contractors, or civilians in a government capacity at Yavoriv at the time of the attack.

But at least one American veteran was at Yavoriv, however; the Army veteran identified as Hieu told Task & Purpose he and other foreigners were camping near the base after traveling to Ukraine to join the International Legion of Territorial Defense.

And as talks continued on Monday between Russia and Ukraine, at least one person was killed and several more injured after an apartment building in Kyiv was shelled by the Russian military. The Russians also reportedly hit an aircraft factory in Kyiv on Monday, setting it ablaze.

All the while, Putin has grown increasingly angry and frustrated “at his military’s failures,” the Associated Press reported, and has signaled “a willingness to cause even more violence and destruction.”

“I think Putin is angry and frustrated right now,” William Burns, the director of the CIA, said last week. “He’s likely to double down and try to grind down the Ukrainian military with no regard for civilian casualties.”