"I survived because the missiles struck the hard structures instead of the tents where I was." 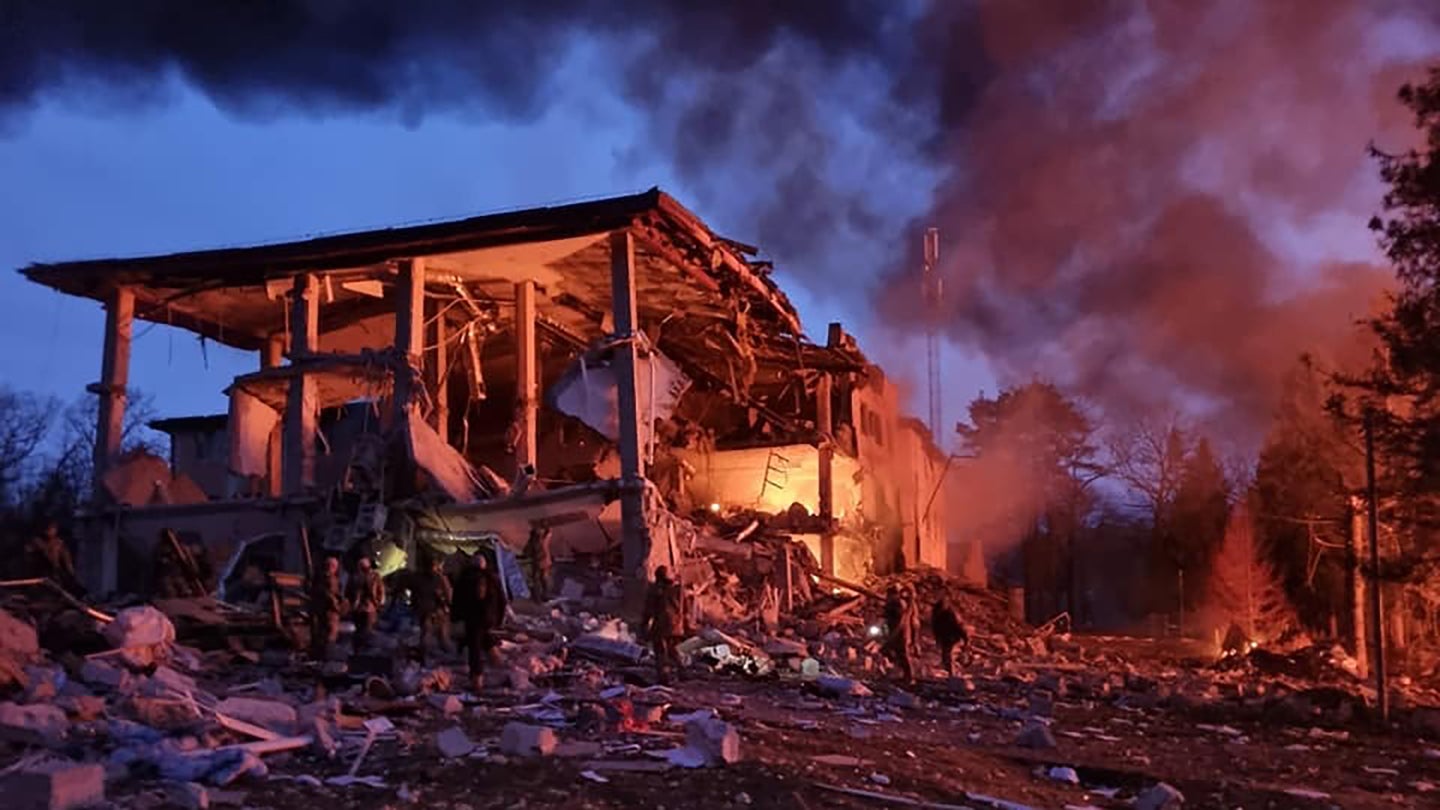 Early Sunday morning, an American veteran now in Ukraine was abruptly awakened by a Russian missile strike on the Yavoriv military training center, where he and other foreigners trying to join the International Legion of Territorial Defense were camped.

“I just remember waking up to my entire tent shaking and then everyone yelling as they ran through the door to the woods,” said the Army veteran, identified by Task & Purpose as “Hieu” at his request. “When I stepped out, I froze in shock for two seconds as I stared in disbelief at the pillar of fire behind the building in front of me. Hearing and seeing another missile impact shocked me back to reality and I ran into the woods away from structures.”

Hieu is one of several readers who responded after Task & Purpose asked veterans headed to, or already in Ukraine to tell their stories. He had only been in Ukraine for a few days when Russian forces launched missiles at Yavoriv, home of a former NATO training center, reportedly killing 35 people.

After he thought the missile attack was over, Hieu ran back into his tent, donned the gear that he had bought for Ukraine, including a helmet, plate carrier with ballistic plates, and an E-Tool. Then rushed towards one of the burning buildings at the training center to see if he could help anyone, he said. Then another missile struck in the distance, so he ran into the woods and began loading ammunition into his magazines to keep himself busy.

Of the 23 volunteers that had been staying in his tent, only seven decided to remain, Hieu said, adding he chose to stay because he still believes in the Ukrainians and wants to help.

Hieu served as an M1 Abrams tank armor crewman from 2010 to 2017, during which he deployed to Afghanistan in 2012. After he separated from the Army, he worked as a defense contractor in Afghanistan for several more years until he decided to open a Vietnamese restaurant in Medellín, Colombia.

When Russia launched its full-scale attack on Ukraine in February, he felt compelled to join the international legion, which is open to foreigners who want to fight the Russians. “It’s the right thing to do,” Hieu posted on his Facebook page in February. “I want to help the Ukrainian people and as [a] US veteran, I feel compelled to stand up for my American ideals. I’m mostly healthy and I’m qualified so I would not be able to rest easy knowing that I didn’t do something when I could.”

So far, his journey to Ukraine has been much different from his last combat deployment to Afghanistan. While serving in the U.S. Army as a tanker, Hieu had the benefit of a substantial support apparatus, from maintenance to logistics. In terms of mission planning, there were operations and intel shops. Equipment was issued, transportation supplied, and all the other boxes that needed to be checked had someone, or an office, to check them. Very little, if any of that, exists among foreign volunteers in Ukraine. For instance, Hieu had to put together his own gear and crowdfund his travel expenses. He was issued an FNC F3 assault rifle with foldable stock when he arrived in Ukraine. Other volunteers have AK-47s and Special Operations Forces Combat Assault Rifles.

The quality of the international volunteers themselves varies widely, revealing how much better trained and prepared soldiers in the U.S. Army are compared to other nations’ militaries, he said.

“Some were professional soldiers and are still competent,” Hieu said. “Others are drunks, people with the most marginal military experience, and people who really should not have come at all.”

He noticed that only a few of the Ukrainians he has interacted with at his current location are older than 25. Most are young Ukrainian soldiers, likely because the more experienced troops are already at the front.

Adding to the chaos and confusion, Hieu said that he and others are a little paranoid because Russians are believed to have infiltrated camps for the volunteers, and “leaks are everywhere.”

Any international volunteers who are captured by the Russians face a potentially bleak fate. Russian Defense Ministry spokesman Igor Konashenkov announced earlier this month that “mercenaries” from the West would not be afforded rights given to prisoners of war or considered combatants under international humanitarian law.

“At best, they can expect to be prosecuted as criminals,” Konashenkov told TASS, Russian state-run media. “We are urging all foreign citizens who may have plans to go and fight for Kyiv’s nationalist regime to think a dozen times before getting on the way.”

A senior defense official cautioned on Friday that the combatants in Ukraine “can’t count on any just treatment by Russia” given the Russian government’s history of disregarding the law of armed conflict and human rights.

When asked if he meant that Americans fighting for Ukraine could be tortured or killed if they are captured by the Russians, the official did not provide a direct answer: “Americans who want to help the people of Ukraine can find lots of other ways to do that aside — in lots of other ways than going to Ukraine and trying to fight on the ground. We continue to urge Americans not to go to Ukraine for any reason, and we continue to continue — to urge any Americans who remain in Ukraine to leave.”

Hieu said he is worried that the Russians would make an example out of him as an American if he is captured, and that is why he is trying to sign an enlistment contract with the Ukrainians in the hopes that he will be protected by the Geneva Conventions, international agreements on the humane treatment of prisoners of war.

“The consensus between some Americans and I is that it is better to die fighting than get captured,” Hieu said.  “I try not to think about it, but I am concerned about dying. Though I believe this cause is more important than my personal safety.”